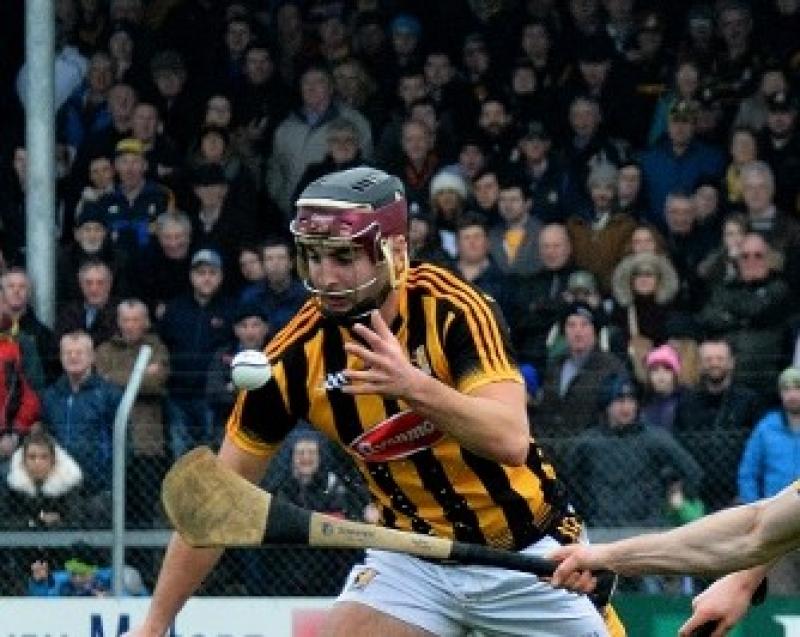 Kevin Kelly, who is not long back after injury, was the star man for St Patrick's

Inspired by the magnificent Kevin Kelly, intermediate champions, St Patrick's (Ballyragget) effected an 11 point turned around in their fortunes when they overcame all sorts of problem in defence to score a battling win over Clara in the Kilkenny senior hurling league in wet Jenkinstown this evening.
St Pat's were in serious trouble in defence early on, and when one of Clara's problem causing attackers, James Nolan broke a ball for James Bergin to clip the sliotar into the net the winners found themselves 1-8 to 0-4 behind after 17 minutes.
The winners dug deep and hung on somehow. They snapped up the closing three points of the half through Joe Brennan and the deadly Kevin Kelly (2) to greatly improve their position at the rest, when they trailed by 0-9 to 1-10.
Clara nicked the opening point of the new half through Jason Byrne to suggest they were ready to roll again. They weren't.
St Patrick's reorganised their defence, which grew in stature as the half wore on, and with corner-forward Michel Brennan hurling up a storm as a third midfield they caught a serious grip on the game.
Barry Staunton turned a nothing situation into a goal in the 39th minute to help spark new life into the winners (1-13 (C) to 1-12). When Joe Brennan added the second goal only two minutes later, St Patrick's found themselves in front, and in control (2-12 to 1-13).
Kelly was all the time sniping scores, and he contributed six points during the half - three frees - as St Pat's registered their second win. This was Clara's second defeat.
SCORERS: St Patrick's - Kevin Kelly (0-13); Joe Brennan (1-2); Barry Staunton (1-0); Michael Brennan (0-2); Robbie Healy, Brian 'Brook' Phelan (0-1 each). Clara - James Bergin (1-10); Jason Byrne, Chris Bolger (0-2 each); Stephen Quinlan, James Nolan, Lester Ryan, Ciarán Prendergast (0-1 each).