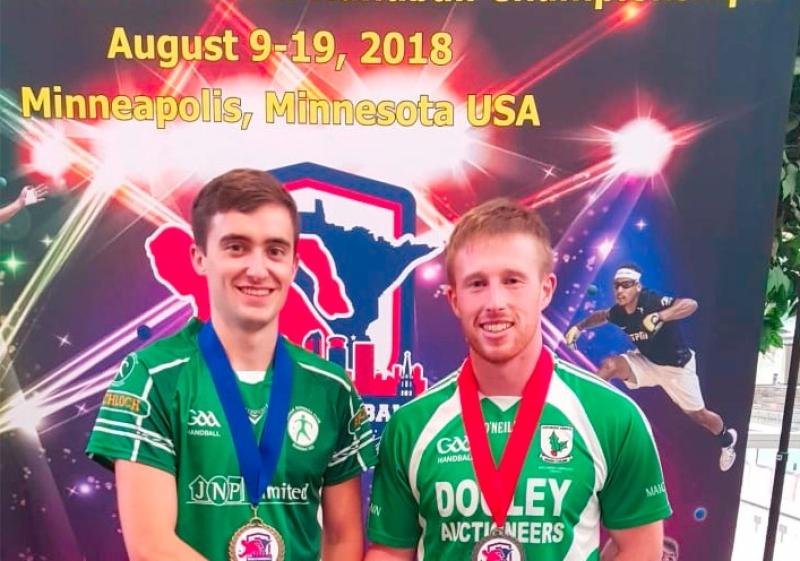 Brian Mahon (Clogh) on the left with his doubles partner, Galen Riordan, Wexford

On Sunday the World Handball championships came to a conclusion with the closing ceremony in Minnesota, US.
Held every three years, the championships have become very popular with the Irish handball community. This time was no different as over 250 Irish players travelled for the event, and dominated in most grades.
With the challenge from the host country at its lowest ever, the travelling Irish contingent demonstrated how far the local standards have dropped in recent times.
From Kilkenny’s point of view there was success for a number of players in the juvenile and adult grades.
In the men’s B championship, Brian Mahon (Clogh) was top seed in the grade. He lived up to the favourites tag by claiming the title.
Coming through a field of 49 participants, the Clogh player was in great form all week and recorded some notable wins along the way. In the decider he faced the second seed, Seamus O’Conghaile from Galway in a match that went to the tie break set.
The first set was won by the Westerner, 21-18, with Brian levelling the contest when winning the second game 21-9.
The superior fitness of Mahon was crucial in the deciding set as he closed out the match to claim the title 11-6.
In the men’s 23 and under grade, Brian and his partner Galen Riordan (Wexford) toppled the top seeds, Daniel Hedigan/Michael Hedigan (Cork) in an exciting final, 21-14, 20-21, 11-4 to add another gold to their growing collection of trophies.
In the juvenile grades players from Mothel and Kilfane will have fond memories of these championships.
Noelle Dowling, Kyle Jordan and Katie Jordan all won titles.
Pride of place here went to Kyle Jordan who dominated the 13 and under grade. Winning all four titles on offer over the 10 days, two Wall ball and two Four Wall, the young Kilkenny player demonstrated his wide variety of handball skills and confirmed his position as the top player in this grade.
His sister Katie also collected two gold medals, one each in the four wall and wall ball girls 11 and under grade.
There was also glory for Noelle Dowling, Mothel when she teamed up with Clodagh Munroe, Tyrone to win the girls Wall Ball 15 and under doubles title.
In the girls 15 and under four wall event, Noelle progressed all the way to the final where she lost out to top seed, Mairead Fox, Tyrone, 21-15, 21-13.
It was a great tournament for the young Mothel player who has improved tremendously in the last couple of years. This was a fitting reward for all the effort she has put into the game during that time.
Elsewhere at the championships, Willie Holden and Aoife Holden (Kilfane), Paul Dowling (Mothel), Ciara Mahon and Shane Dunne (Clogh) all found the going tough in very competitive grades.
As part of the Irish team, Shane Dunne reached the semi-final of the 19 and under grade where he lost to Canadian player, Ivor Burgos in a tie break contest, 11-2.
However, there was a gold medal for the Clogh player in the doubles competition when, partnered by Sean Kerr (Tyrone), they defeated Tiernan Agnew (Clare)/Jerome Cahill (Tipperary) in a thrilling final, 11-21, 21-14, 11-8.
In the ladies Open doubles, Ciara Mahon and partner Pauline Gallagher (Mayo) were defeated by top seeds, Aishling Reilly and Martina McMahon.
There was also disappointment for Ciara in the ladies 23 and under division final. Here she was beaten by Ciana Ni Churraoin (Galway) in two sets.
There was also disappointment for Aoife Holden in the girls 19 and under four wall grade when she partnered Ella Donnellan (Clare) to the silver medal. They were beaten by Mollie Dagg and Leah Doyle (Kildare).
County 60x30
In the county senior 60x30 singles final, Ciaran Neary (Talbot’s Inch) and William Love (Clogh) served up a cracking contest.
Played in Mullinavat, both were on top of their game and the standard of handball was very enjoyable for the crowd.
The first set was ace for ace early on before Ciaran went 12-6 ahead. Some great serves and good kill shots saw William claw back to level at 12 all.
The next few aces went to the ’Inch player and although he led 17-14, the Clogh man refused to give in.
Reaching 17 William couldn’t make up the deficit as Ciaran closed out the first game.
The second game was dominated by the Talbot’s Inch player from early on and he was a comfortable 21-5 winner to retain the county singles title. Afterwards the Eamonn Law Cup was presented to Ciaran by Gary Law.
On Tuesday night in the county minor 60x30 singles final, Jack Holden (Kilfane) and Billy O’Neill (Clogh) produced a three set match that went right down to the last ace.
The first game went very much in Billy’s favour as he scored a comfortable enough 21-12 win.
The match was brought to the third set when Jack levelled by winning the second set 21-19.
In the deciding game the destiny of the title went right down to the wire and in a thrilling finish where both players had a chance of victory, it was the Kilfane player who scored the winning point to seal the victory 21-20.
Leinster fixtures
Today (Wednesday) at Garryhill (7.30pm) MS Ciaran Cooney (Kilkenny) v Ciaran Power (Wexford); at Talbot’s Inch (8pm) MS Jack Holden (Kilkenny) v Billy O’Neill (Kilkenny); at Tinahely (7.30pm) GMBS Jamie Travis (Kildare) v David Bourke (Kilkenny).
Saturday at Garryhill (5.30pm) DMAS Eamonn Purcell (Kilkenny) v Tony Breen (Wexford); 6pm MBS Gavin Grace (Kildare) v William Murphy (Kilkenny); at Tinahely (5.30pm) DMBS Brendan Murphy (Wexford) v Gerry Murphy (Kilkenny).
Wednesday, August 29 in Clogh (7.30pm) JBS Myles Carroll (Kildare) v Martin Mullins (Carlow); 8pm JBS Kevin Barrett (Carlow) v Ivan Carroll (Kildare); at Coolgreaney (8pm) LJS Meadhbh Ní Dhálaigh (Dublin) v Deirdre Purcell (Kilkenny); at Garryhill (7.30pm) under-21S, Aidan Barry (Kilkenny) v Adam Walsh (Wexford); 8pm ID Shane Dunne/Keith Bourke (Kilkenny) v Darren O’Toole/ Malachy Whelan (Wexford); at Kilmyshall (8pm) DMAS Johnny Brennan (Kilkenny) v Martin Clancy (Carlow); at Tinahely (8pm) DMBS Miley Byrne (Wexford) v John Maguire (Kilkenny).