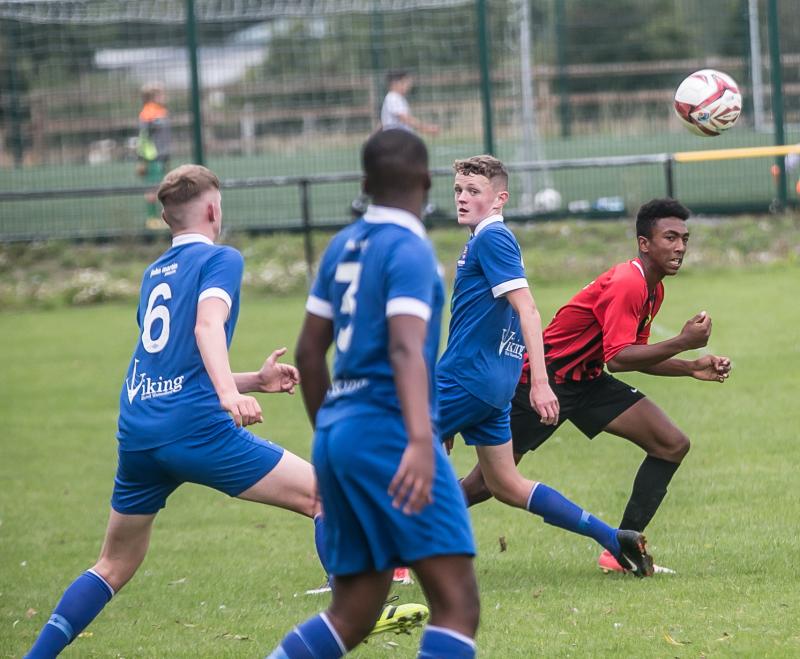 Carlow Kilkenny maintained their brilliant start to phase two of the Under-15 SSE Airtricity League with a good win over neighbours Waterford.

Zach Bay Hammond, Jack O’Neill and Jamie Murphy were on target as Mark Ross’s side made it three wins from three games at Derdimus on Saturday to extend their lead at the top of their Shield group table.

On a high after their wins over Cobh Ramblers and the Kerry League the locals were keen to keep their good run going but had to look lively to withstand some early Waterford pressure. Defender Darren Lawlor was in the right place to head a teasing Charlie Binnions corner off the line after six minutes.

Carlow Kilkenny went on the attack after that, going close when Zach Bay Hammond outmuscled the last defender and sprinted on to Eoghan Byrne’s 13th minute pass but his shot was deflected wide. There was more danger from the resulting corner, Rory O’Dowd picking out Hammond, but Waterford goalkeeper Conor Cummins made a fine diving save.

The home side continued to attack at pace and used their speed to take a 26th minute lead. Jake Haughney hared down the left, twisting and turning past his marker before firing in a dangerous cross for Hammond to head home.

Waterford were stung by that goal and tried their best to get back into the game. Aaron Roche and Cillian Kelly had chances, but netminder Josh Coady made two fine saves to keep his side in front.

Carlow Kilkenny turned up the heat again in the second half and wasted little time in doubling their lead. Jack O’Neill and Zach Bay Hammond worked a clever one-two on the edge of the box, the move making enough space for O’Neill to drill an unstoppable shot into the top left corner.

Waterford hit back soon after, halving the deficit when sub Micheal Quinlan pounced to score from Charlie Binnions’ driven cross.

That goal was the start of a lengthy spell of Waterford pressure but Carlow Kilkenny held on to their lead. Waterford thought they had found that equaliser when Jack Deegan’s long-range shot spun up and over Coady’s hand, but the goalkeeper scrambled back to make a goal-line save.

Spurred on by that save, Carlow Kilkenny raised their game and made the result safe. Conor Cummins did well to deny Niall Rowe when he was sent through on goal by Cian Byrne’s through ball, but there was little the netminder could do to prevent Jamie Murphy from finishing the rebound.

Carlow Kilkenny will be hoping to keep that 100% record going when they take on Waterford away this weekend.