Thomastown roar to success at home and abroad 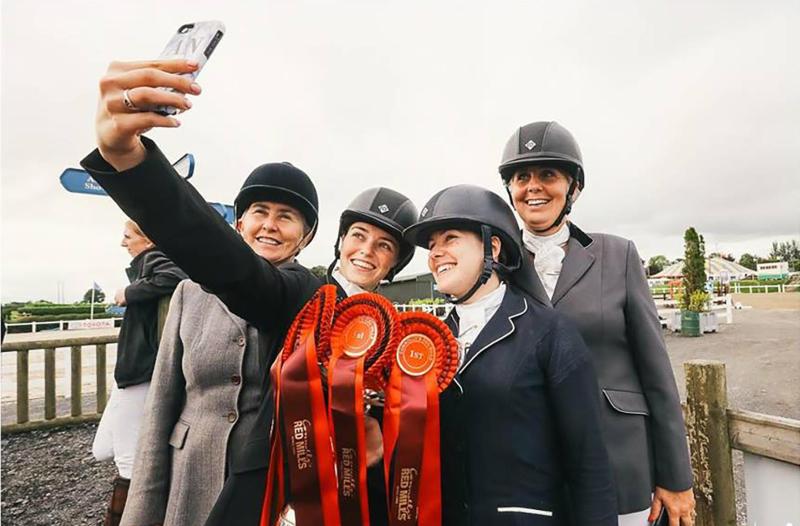 Established in 1980 and going from strength to strength since, the season 2018 has been the best to date for Thomastown and District Riding Club.
The glory run started with a team win at the AIRC Dressage Championships and included show jumping success abroad, while many members also took part in training sessions and competitions run throughout the South East.
Flying high at RDS
The club secured their place for the Horseware Team Show Jumping Championship final at the Dublin Horse Show in August after they won the South East qualifier in Warrington.
The team was made up by Jade Douglas (Carrigbeg Coco), Maria Rockett (Stonehavens Olive), Aisling Misklas (Lassban Miss Congeniality) and team captain Jessica Ryan (Barrettstown Close Shave). Due to an injury Niav Cahill (Dinan Sinead) replaced Jessica for Dublin.
At the qualifier in the Top Flight Equestrian Centre in May, Thomastown and District were the only team to finish on a total score of zero out of the 23 participating teams.
The team were just outside of the ribbons at the finals in the RDS, finishing in 7th place.
Winner! Winner!
Competition in the arena was heating up, but it was team Thomastown and District who proved hottest of all in the Connolly’s Red Mills Dressage Team Championship at the AIRC National Dressage Championships.
Thomastown and District Riding Club had an impressive winning margin when winning in style in Mullingar.
The winning team of Jo Forde (Bluelake Richard), Jade Douglas (Carrigbeg Coco), Caroline Carey (Stonehavens Olive) and Aine Nolan (Persian Knight) finished on a total of 438.29% to claim the national title.
With the best three scores counting from the two rounds, Caroline Carey, Gowran, stepped it out aboard Gillian Hennessy’s Stonehavens Olive, producing the highest scoring test of the competition of 78.95% in her morning test.
Her afternoon test was equally impressive. She scored 75.50%.
Every mark mattered as Jade Douglas (Carrigbeg Coco) registered a score of 77.83% in the morning. This was followed with the teams highest score of the afternoon of 75.95%.
Following the win, club secretary Gillian Hennessy said: “We set out earlier this year to concentrate a little more on our dressage and to say we reached that goal is amazing. To qualify and get to compete at the final just goes to show that hard work does pays off.
“The team trained hard and we are thrilled with the winning the title of National Dressage Champions.”
Qualifiers for this event were held in July at Treegrove Farm.
The team was Caroline Carey (Stonehavens Olive), Jade Douglas (Carrigbeg Coco) and Jo Forde (Bluelake Richard). Both Jade and Jo qualified for the individual championship.
Joan Mahon (Lady Jaine) was replaced by Aine Nolan (Persian Knight) for the National Dressage Championship final due to Lady Jaine having to take early retirement.
Caroline Carey won the Primary Individual Championship and Jade Douglas came fifth in Advanced Primary Individual Championship.
Abroad
In September the club were selected and travelled to the Lincolnshire Showgrounds, England to represent the AIRC at the NAF British Riding Club Championships.
This was the second time the club was selected to represent Ireland in this prestigious championship.
The team of Kieran Cahill (Srilanka Diamond), Niav Cahill (Dinan Sinead), Aisling Miklis (Lassban Miss Congeniality) and Maria Rockett (Stonehavens Olive) just missed out on a podium place.
They finished fourth in a field of 10 from some of the best teams in England in the senior Open 1.10 metre - 1.20m Team Show Jumping Championship.
Kieran Cahill proved crucial to the Irish team as the Maganey resident provided a double clear round on his seven-year-old bay ISH gelding, Srilanka Diamond.
While the team registered some faults in the opening round, they bounced back strongly in the second.
Niav Cahill (Dinan Sinead), not to be outdone by her husband, jumped a clear round to help the team finish fourth.
Team Chef d’Equipe Gillian Hennessy said it was an honour for the club to represent the ’Association at the NAF British Riding Clubs National Championships.
“Having to faced strong competition from some of best show jumping teams in England, Thomastown and District did us proud and their hard work and training paid off,” she insisted.
Meanwhile, Kieran Cahill’s double clear round meant the Thomastown and District rider also qualified for the individual final.
Cahill registered the quickest time in the jump-off after Srilanka Diamond hit the beam in 38.81 but with two fences on the floor, it left him in sixth place overall.
Unbridled enthusiasm
The thrills and spills didn’t stop there. The season proved to be a great success with many members taking part in competitions around the South East.
At the National Hunter Trials Championship in April in Flowerhill Equestrian - Aine Nolan (Persian Knight) and Jade Douglas (Carrigbed Coco) won the Advanced Primary Pairs; Tracy O’Dwyer (My Oscar Wilde) was fourth along with Pat Tallon in the Mixed Pairs; Tracy O’Dwyer was also fifth in the Advanced Intermediate Individual Championship.
Members also attended the South East Celtic Equine Horse Trials League over the summer, with Aisling Misklas, a new member, finishing second in the Advanced Intermediate section and Sharon O’Brien aboard her own Chapelhill Tommie, no stranger to the arena, finishing in fourth place in Advanced Primary.
Jacques Murphy (Inspector Imp) was second in the Advanced Intermediate Power and Speed competition at the AIRC Festival in June.
At the National Show Jumping Championships in Mullingar Equestrian, Kieran Cahill (Srilanka Diamond) was fifth in the Advanced Open/Open Show Jumping Championship.
Cahill (Srilanka Diamond) won the Advanced Open/Open Derby Championship and was fourth on his wife Niav’s, Dinan Sinead.
Aisling Misklas (Lassban Miss Congeniality) was sixth in the Ad Open/Open Championship.
Membership of Thomastown and District is currently open for 2019 and new members are always welcome.
The cost of membership is €75. It is a very active club with weekly training sessions available with experienced coaches.
Social events and leisurely hacks are also organised between members throughout the year.
The contact is club secretary, Gillian Hennessy (087 674 4968).