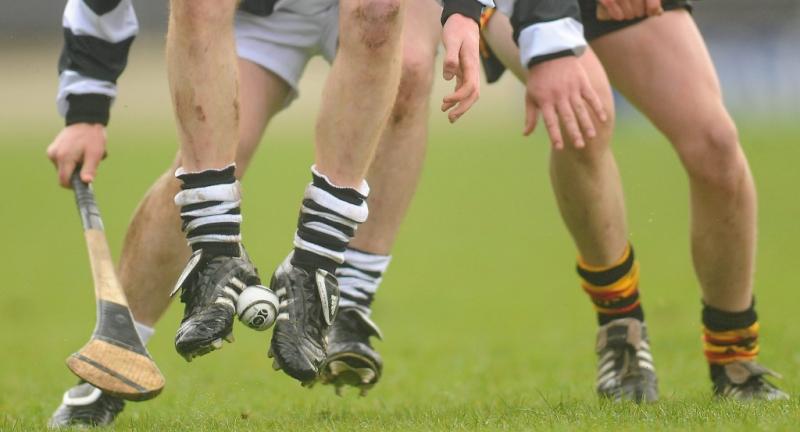 After a very heavy night’s rain, the Galmoy pitch held up well for the under-19 clash between Galmoy/Windgap and Mooncoin.

It was Galmoy/Windgap who opened backed by the slight breeze. From the throw-in Mooncoin midfielder Billy Delahunty hit the first point.

The home side replied with three in succession, two from Oisín Phelan and one from Conor Grace. This opening salvo set the tone for what was to prove a high scoring encounter.

Mooncoin corner-forward, Cormac O'Shea soloed in from the right and popped the sliotar over the bar for his side’s second on four minutes. Galmoy/Windgap then enjoyed a profitable spell which yielded four points in succession.

The first one came when Oisín Phelan took a shot from 40 metres on the right hand sideline with the sliotar hitting off  the upright and dropping over. Conor Grace then took a good pass from Ryan Murphy and shot over from 50 metres, while Robert Culleton and Odhrán Moloney also struck over from close range.

Mooncoin moved wing forward Ryan Crowe from right half forward to full-forward and he began to win some good ball. They hit three wides in succession though. County minor Killian Hogan struck over a free in the 14th minute and he followed with one from play after a good pass from Crowe.

Midfielder Patrick Grace always works hard for his side and his efforts were rewarded with a good point in the 17th minute. Oisín Phelan and Odhrán Moloney combined well for the latter to shoot his second to stretch the lead to four points.

After some clever approach work involving Billy Delahunty and Killian Hogan, Ryan Crowe found himself in possession on the Galmoy endline just five metres to the left of goal. His low shot across the face of goal sneaked inside the far upright for a goal.

Killian Hogan was now making a big impression at centre-forward. He sent over a cracking point in the 20th minute to leave it Galmoy/Windgap 0-9, Mooncoin 1-5.

From here to the break the home side dominated possession, shooting four more points. Conor Grace hit two from play while Robert Culleton hit one in addition to an Oisín Phelan free following a foul on Jack Doyle.

At the back Eoin O'Brien and Padhraic Foley were very impressive on the left wing and they got in a string of telling clearances. Unfortunately for Mooncoin, Ryan Crowe picked up a muscle injury before the interval and moved into goal for the remainder of the game. Donnacha Hogan moved out the field to play at wing forward.

Neither side used any subs during the game, simply because they didn’t have any.

And so, after trailing by 0-13 to 1-5 at half time, Mooncoin again drew first blood in the new half when Killian Hogan pointed his second free. However, just as in the first half,Galmoy/Windgap hit three together when Oisín Phelan(two) and Patrick Doyle split the posts.

Having recently won the county minor Roinn A final, Mooncoin were not going to succumb and they kept bringing the fight to their opponents. One of their leaders ,Billy Delahunty exchanged points with Oisín Phelan to keep them in the hunt.

Killian Hogan added a free before promising centre-back, Martin O'Neill charged forward to plunder a point. The visitors got a boost in the 46th minute when Sean Gannon took aim from 35 metres and sent the sliotar into the top right corner of Conor Foley’s net.

This brought the difference back to two points ,Galmoy/Windgap 0-17, Mooncoin 2-9.

Previous trends continued though. The hosts shot back with three unanswered scores. Oisín Phelan and Conor Grace from placed balls and County Minor Jack Doyle, from play, extended that lead to five again.

Doyle finished the game very profitably as he hit a total of three points from play in the closing 10 minutes. His county colleague, Killian Hogan also hit three frees in that same period and his efforts , along with one from Sean Gannon kept the visitors in contention up to the final whistle.

Galmoy/Windgap  got over the line in front though to seal a place in the final on Sunday against Mullinavat. These sides met three times at under-18 level in 2017 with the score 2-1 in favour of Galmoy/Windgap.

However, it was Mullinavat  who won by three points when they met in last year’s minor championship semi final.