The lesson that you always hang in served Dunnamaggin well 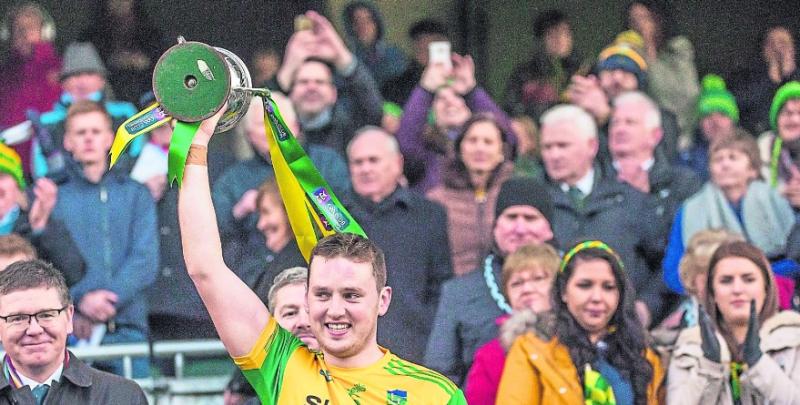 If Dunnamaggin have added something new and vitally important to their game this season it is that you always keep going, keep trying no matter what.
That ‘never say die’ attitude got them over the line in the Titanic tussle that was the All-Ireland semi-final against Cloughduv (Cork).
The same attitude came to the fore in Sunday’s All-Ireland final when Dunnamaggin struggled to produce their best form for a long period of the game.
“From the beginning of the year Eamonn Kennedy, our manager and a die-hard Dunnamaggin man, was saying it doesn’t matter what way we play once we keep going to the final whistle and keep putting in the effort,” explained team captain, Willie Phelan when we explored their slow burn game against Castleblayney.
“Over the year that thinking has been building and building. Actually, in the last couple of games that aspect of our play has been particularly strong.
“In other years we might have packed up the bags and let the game off. But in the last two games, the semi-final and now the final, we ground out tough wins.
“Today we had to stay at it again and we came out on the right side of the result.
“The winning feeling in great. The dressing-room is a good place to be.
“The old saying goes, it is not over until its over,” Willie continued. “We didn’t know an awful lot about Castleblayney. We knew we had to put in a big effort, and winning required even more than that.”
He said the feeling of want grew during the campaign - to win Kilkenny; then Leinster; then the All-Ireland.
“Then things didn’t go well for us in the first half,” Willie felt when he looked back on the action. “Small things went wrong. The ball wasn’t coming up for us and what not. At half time we said we would keep going, and keep going for the 60 odd minutes.
“Eventually we got out on the right side of it.
“But we didn’t perform like we could. Credit to Castleblayney, they threw everything at us. Any time the ball broke they had two or three lads in on top of it.
“They were mad for work. That made it difficult for us to find our rhythm.”
Dunnamaggin was a deserted place on Sunday as a proud people made the pilgrimage to Croker.
“There are buses and buses of Dunnamaggin people out there, and they are part of this,” the former Kilkenny under-age star insisted.
“Dunnamaggin is their place, their club and they are immensely proud. This championship has been a great experience for us all.
“When you are young lad pucking a ball up against a wall you dream of playing in Croke Park. Our players got a chance to live the dream.”
And shortly attention would switch to the start of Kilkenny intermediate league/championship.
“We are looking forward to that now, “ Willie said. “The last time we were in it we felt we let ourselves down because we were relegated.
“We want to give it a good rattle this time. This was a great place to start the work and the thinking for that, with a win.
“Everyone bought into the work and the effort all season, and the 34 on the panel really took on the challenge. In the end it was the united effort that got us over the line,” the team skipper felt.
Castleblayney manager, Jimmy Lacey, who is originally from Ballyragget, was gutted that his side were out-classed in the end.
“We knew what we were capable of,” he explained. “No matter how many people we tried to tell, no matter what words we put to it to try and convince people we weren’t here to make up the numbers, no one heard.
“Losing is hard to take. We feel the game was there for the taking. We probably let it slip. We probably lost our shape in the second half, and paid the price.”
He congratulated Dunnamaggin, praising them for the dogged way they stuck to the take of trying to take control of the match.
“I am so proud of the players,” he added. “ They left everything on the field. We said coming up here we would have no regrets. I don’t think we can.”