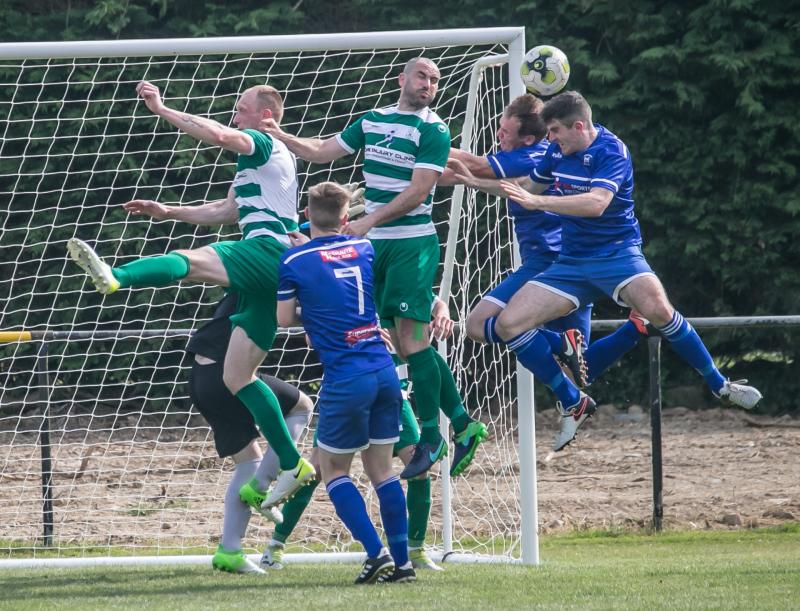 An all-Premier Division tie, city clashes and a meeting of former finalists is the fare on offer after the draw was made for the opening round of this year’s McCalmont Cup.

The draw, which was made at the weekend, will see champions Evergreen A start the defence of their title away to Clover United.

Gary Maher’s side will be hoping for a result similar to the one they secured on their last visit to Rathdowney. The sides met in the league a few weeks ago, with Evergreen winning 4-0 thanks to goals from Decky McQuillan (2), Chris Whearty and Lee Delaney.

Evergreen are the back-to-back winners of the Cup, scoring successive final wins over Thomastown United. A goal in either half from Jamie Owens and Mikey Drennan did the trick as the city side beat Thomastown United A 2-0 in the 2018 final in Derdimus.

Owens broke the deadlock in the 11th minute, acrobatically finishing after a Chris Whearty shot flew into his path.

Evergreen A captain Niall Andrews is presented with the McCalmont Cup by John Corrigan, Kilkenny & District League, following their 2-0 win over Thomastown United A in the 2018 final PICTURE: PAT MOORE

And Drennan made sure of his side’s 14th Cup title (they are now one behind table toppers Freebooters) when he coolly converted a penalty 11 minutes from time.

The Cup draw also brought two former finalists together again. Newpark A will be hoping they can progress to the next round when they take on Brookville in Ballyragget. The sides met in the 2013 final, with the honours going to the city side who were managed by Mark Ryan, thanks to Shane O’Neill’s match-winning goal.

Other ties of note include the city derbies featuring Freebooters B and Ormonde Villa, while Freebooters A will play host to Evergreen C. Another tie of note will see Deen Celtic A take on promotion-chasing Bridge United A in what is sure to be an interesting match.

Newpark B v Thomastown United A

Evergreen B v Deen Celtic B