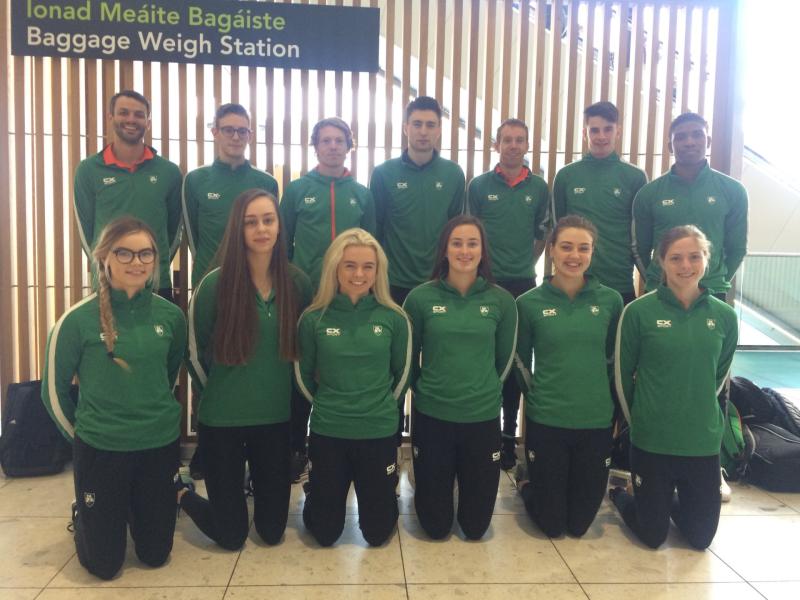 St Joseph's AC member Sophie Becker (front row, second from right) is part of the Irish team who will compete at the European Indoor Championships in Glasgow

Kilkenny athletics will hit the European stage at a major competition this weekend.

St Joseph’s runner Sophie Becker is part of a strong team of 16 Irish athletes who will fly the flag at the European Indoor Athletics Championships in Glasgow this weekend.

Becker, who runs in the 400m, hopes to be a dashing debutante in her first senior indoor appearance for her country.

She will be hoping to bring her early season form to Scotland. Becker won the women’s under-23 60m and 200m titles, then followed that up by hitting the European qualifying time with victory in the senior women’s 400m race at the AAI Games.

The team will be led by a strong quartet in Phil Healy (Bandon), Ciara Mageean (UCD), Mark English (UCD), and Thomas Barr (Ferrybank). Phil Healy is ranked fourth in the women’s 400m with Mageean and English (1500m and 800m) both ranked fifth on the European Indoor lists.

Joining Becker on the newcomers list are Carlow’s Molly Scott (St Laurence O’Tooles) and Lauren Roy (City of Lisburn) in the 60m and Sommer Lecky (Finn Valley) in the high jump.

It’s a good step up for the under-20 athletes with three members of the women’s world 4x100m silver medal-winning team running in the 60m with Ciara Neville (Emerald) also an individual qualifier. Also stepping up is world under-20 high jump silver medallist Sommer Lecky.

On the men’s side Cillin Greene (Galway City Harriers) in the 400m, Sean Tobin (Clonmel) in the 3,000m, Joseph Ojewumi (Tallaght) in the 60m, Conall Kirk (Annadale Striders) in the 800m make track debuts.

“This is a strong Irish team that is primed to put in a performance at this championship,” said Paul McNamara, Athletics Ireland High Performance Director.

“Our more high profile athletes have had stellar seasons to date with Ciara, Phil, Mark, Siofra and Thomas very well placed on the European ranking lists.

“This event will provide an excellent transitioning opportunity for our talented crop of 2018 under-20s such as Molly, Ciara, Lauren and Sommer while emerging athletes like Joseph Ojewumi, Cillin Greene and Sophie Becker have shown exciting form this season to earn their spots. This will be a good championships for Irish athletics.”

Becker will be in action on Friday afternoon when the heats of the women’s 400m are held at 1pm. If successful, she will contest the semi-finals that night (8.30pm), with the final to be held on Saturday after 8pm.

The European Indoor Athletics Championships will be broadcast on RTÉ across the weekend.