Some Limit races to victory in St James Park 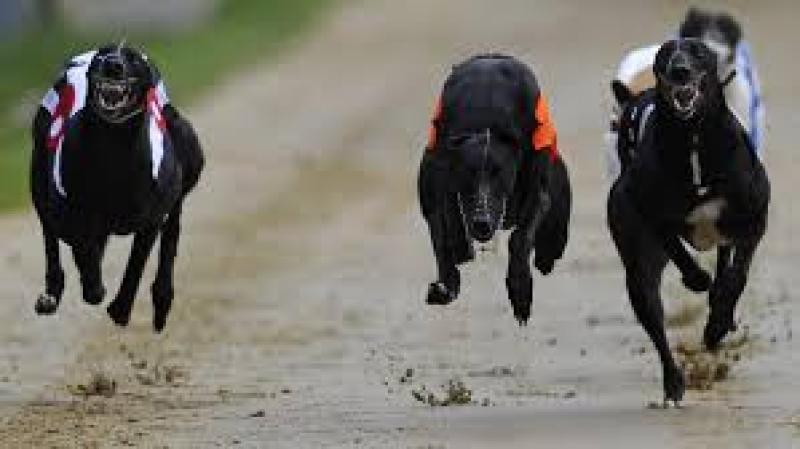 Racing at St James Park, Kilkenny greyhound track on Friday night was a test of stamina and more for all because it was a very wet track.
The track was rated .50 slow early on, and as the weather worsened as the night progressed it went to .80 slow.
It proved to be a good night to be drawn on the outer.
The 30 seconds mark was broken just once and that was by Laura Kennedy’s Some Limit in the final of the Fundraising Nights @ Kky Track Unraced stake.
The son of the Over Limit and Fahrenheit Belle dashed to the bend showing massive early pace despite the wet track as his main market rival, Finding Joy struggled to get going.
Some Limit raced five lengths clear out of the second bend as Finding Joy giving chase.
The lead remained at five lengths into the third.
Finding Joy tried to close the gap late on, but Some Limit was not for catching and took the first prize of €1,200 by five lengths in 29.89.
The a3 final was won by the brilliant Triangle Rinty, while trainer Murt Leahy recorded a double with Coconut Bay and Dutch Dream scoring.
Flew to bend
Daryanoor Orlov flew to the bend in the opener and built up an early lead.
The pace setter was raced three lengths clear of Universal Bake into the second but saw her lead reduced to just a length as she turned for home.
Universal Bake was forced to check off the third and this gave a chance to Bogger Pod.
Bogger Pod took full advantage, galloping through to win by two and a half lengths from Triangle Dasher in 30.59.
The second race saw Windsor Knot and Paulstown Oscar go to the bend together.
Paulstown Oscar swept into the lead and was four lengths to the good at the second bend.
The lead was up to six lengths by the third and the Brian Ellard trained Paulstown Oscar was in complete control.
Paulstown Oscar romped home eight and a half lengths clear of Windsor Knot in a time of 30.28.
In race four, an a7/a8 525, Boru Spud and Coconut Bay started best and went to the bend battling for supremacy.
Shading it
The former was shading it by a half a length by the second, but Coconut Bay ran into the third bend stronger to lead by two lengths.
On the run home the Murt Leahy trained Coconut Bay cleared away to win by eight lengths in 30.50 as Sunoak Hera came through for second spot.
In race five Bull Run Petal flashed from traps but was passed by Bogger Treasure and the reserve Rosshill Jet into the first.
Bogger Treasure moved a length clear of his rivals into the second. Rosshill jet powered down the far side and hit the front by the third.
There was no stopping Rosshill Jet and he won in fine style.
An Cailin Alainn chased hard but had to settle for second spot, three lengths behind Rosshill Jet in a time of 30.38.
Tough contest
The staying race (725) was a tough contest in the conditions. Naylors Jim Bob started best and tried bravely to make every yard of the running.
The leader held a lead of two lengths for much of the contest as he was tracked all the way by Kilara Lynda.
From the fifth bend home Kilara Lynda began to edged closer. Naylors Jim Bob dug deep up front, but as the line approached Kilara Lynda wore him down.
Kilara Lynda scored by a half a length in 43.11.
Race seven was the Frightful Flash a3 525 final.
The second of the night’s finals saw Trumera Quarry start best from trap five.
Trumera Quarry went on and was a length in front of Come on Irene at the second bend. Into the third Come On Irene had hit the front, but just a length behind was the strong running Triangle Rinty.
Come On Irene looked to be holding Triangle Rinty, but Rinty made light of the conditions as he stormed up the rails for the win. Triangle Rinty took the victory by a length in 30.31.
Killenane Freddy made every yard of the running in race eight to complete a double for trainer Brian Ellard.
The fast starter got across to the rail and went on to lead River Messi by three lengths coming out of the second bend.
River Messi shaved a length off racing into the third and set about reeling in the long time leader.
However, Killenane Freddy was not for catching and he saw off River Messi by two lengths in 30.47.
Race nine was a Superior Product at Stud a2 525 semi-final.
A Dutch Dream
The first of the a2 semi-finals was won by Dutch Dream. The winner did not fly out, but used his early pace to go to the bend with Me Batman.
After edging to the lead out of the second turn, Dutch Dream was a length up at the third.
Me Batman tried to battle back but in the end, Dutch Dream held that length advantage in 30.03.
Race 10 was a Superior Product at Stud a2 525 semi-final. Race void.