Numbers down, yet Mullins Cheltenham team is strong 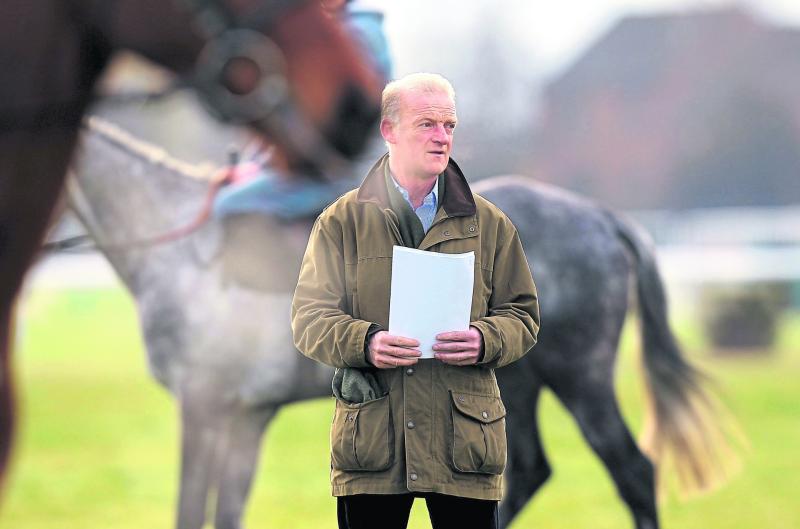 While entries may be down on previous years, Willie Mullins sends a very strong challenge to Cheltenham for the annual national hunt festival which begins next Tuesday, March 12.
Last year, about 60 horses left Closutton for the Cotswolds, but on this occasion, approximately 40 are expected to compete for the Kilkenny man.
Penhill, a winner from last year, is unfortunately one of those out but Mullins’ charges still ooze class.
“It’s been tough getting the horses out,” said Willie, explaining that the mild spell we have been enjoying is not conducive to preparing horses for the major national hunt festival.
“We haven’t had a winter really and this makes it difficult in preparing horses. Cheltenham will always have a surface great for racing, but we will have runners who will have enjoyed good going over here. You could have a horse that excels on good ground going over, and a spell of bad weather could upset his form.
“We have to be careful at looking at our winter form, and that has meant we have a smaller team than usual going over,” he added.
Going through the runners Willie is hoping for a step up in form from Melon, and revealed that Faugheen is in “good order.” Also up against Faugheen is Bacardys, who fell at the last in 2018.
Of course Willie will be hoping to finally land the Gold Cup, and with Kemboy and Bellshill in particular, he certainly has a good chance
Taking it day by day, here’s some of the horses from Willie’s stables that he feels have a good chance to make an impression at Cheltenham.
Tuesday
Sky bet Supreme Novices Hurdle - Aramon and Klassical Dream.
Racing Post Arkle Challenge Trophy Chase - Duc Des Genievres.
Unibet Champion Hurdle Challenge Trophy - Melon.
OLBG Mares Hurdle Laurina, - Stormy Ireland.
Close Brothers Novice Handicap Chase - Ballyward.
Wednesday
Ballymore Novices Hurdle - Arman and Castlebawn West.
Betway Queen Mother Champion Chase - Footpad and Min.
GlenFarclas Cross Country Chase - Ballycasey.
Boodles Fred Winter Juvenile Handical Hurdle - Maze Runner, Ceil de Neige.
Weatherbys Champion Bumper - Blue Sari.
Thursday
JLT Novices Chase - Real Steel, Voie de Reve.
Ryanair Chase - Un de Sceux, Footpad or Min.
Bet Stayers Hurdle - Faugheen, Bacardys.
Trull House Stud Mares Novices Hurdle - Sancta Simona, My Sister Sarah and Elfile.
Friday
JCB Triumph Hurdle -Tiger Tap Tap.
Albert Bartlet Novice Hurdle - Allaho.
Magners Cheltenham Gold Cup Chase - Bellshill, Kemboy, Invitation Only, Alboum Photo.
Johnny Henderson Grand Annual Handicap Chase - Cadmium
Martin Pipe Conditional Jockeys Handicap Hurdle - Get a reason and Robin de Carlow.