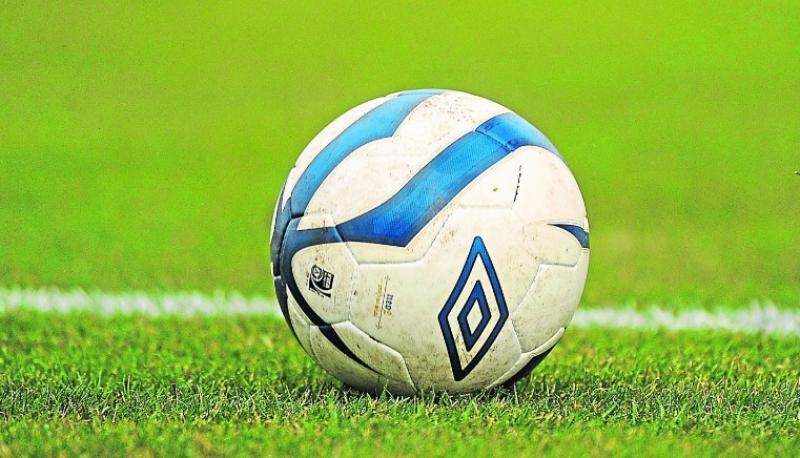 Champions Evergreen A made a winning start to the defence of their McCalmont Cup title, but had to work hard to mow down a strong challenge from Clover United A.
The city side found it tough to break down their Rathdowney counterparts for long spells when the sides met in the Premier Division earlier this season, with Sunday’s trip to Quigley Park proving just as troublesome.
Although they took an early lead through Sean Barcoe, Clover didn’t give up. The game was 2-2 midway through the second half, Davy Mulcahy on target for ’Green, but late goals from Niall Andrews and Barcoe again ensured Gary Maher’s side progressed to round two with a 4-2 win.
Decimated
The McCalmont Cup schedule was decimated by the weather, with just six of the 15 games that were down for decision going ahead.
Among the big winners were Thomastown United A, who beat Newpark B 6-0 at the Fen.
Last year’s beaten finalists were quick out of the blocks, Andy Kavanagh taking just five minutes to open his side’s account.
Rory Monks was just as swift to get on the scoresheet, making it 2-0 to United just three minutes later.
Further goals from Neil O’Mara and Kavanagh meant United were in a comfortable position when 4-0 up at break.
Thomastown were back on the charge after the restart, with Shane Molloy grabbing a quick brace to seal his side’s 6-0 win and passage into the next round.
There they will join Freebooters A, who beat Evergreen C 8-1 and River Rangers, who had a 5-3 win over Thomastown United B.
Survived Weather
One other city derby survived the weather, with Ormonde Villa beating Freebooters B 3-1.
The game, which was moved from the Fair Green to Scanlon Park, started well for the Blues as they took a 1-0 lead thanks to Danny Bolger’s goal, but it was all square when Cian Loy converted a penalty for the visitors.
A revitalised Villa took control in the second half. Dean Conlon and Nathan Cody were on target for the Garringreen side, who are enjoying a superb run of results of late.
Six Wins in a row
Currently top of Division Two Sunday’s result means they’ve now won six games in a row (a run that takes in four league games and the Division Two Cup tie with East End United), scoring 16 goals in the process.
Bridge United’s A team also advanced in this year’s Cup but needed a late rally to see off Paulstown 06.
The local derby looked like going Paulstown’s way when they led 2-0, but three goals from Evan Barcoe, Craig Wall and Eddie English helped United get the measure of their rivals.