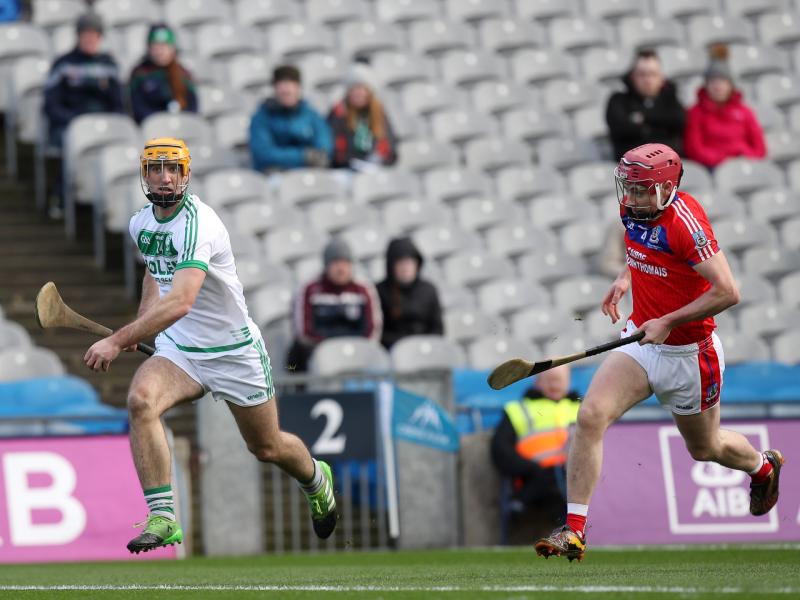 Colin Fennelly (left) was in top form in club All-Ireland

All-Ireland club final sensation, Colin Fennelly is ready to rejoin the Kilkenny senior hurling squad.
The Ballyhale Shamrocks hitman hobbled out of Croke Park on Sunday, but he should be present when the panel assembles this evening to begin training for the Leinster championship.
Fennelly was simply too hot to handle as he blasted 2-4 from play to destroy the dreams of St Thomas (Galway) in the club decider.
The 29-year-old speed merchant hurt his left knee when landing awkwardly after contesting a high ball in front of goal at the Canal End.
Fennelly punched the ground in frustration after suffering the injury, and he was unable to chase possession afterwards.
In the 64th minute he was called ashore by Shamrocks selector, Richie O’Neill.
That left the new kings of the club scene to see out normal time, plus an unexpected eight minutes of additional time, with 14 men as they had already committed five subs.
Club sources last night confirmed that Fennelly’s injury wasn’t as bad as first feared.
Show of force
He was okay, although it was unlikely he would be running at full tilt straight away.
The show of force from the former All-Star came as a timely boost to Kilkenny boss, Brian Cody, who saw his charges put in a limp performance when losing to Cork in a National League relegation play-off only 24 hours earlier.
In all, Shamrocks will contribute a magnificent seven players to the Kilkenny squad.
Fennelly will be joined by TJ Reid, the county captain for 2019, Joey Holden, Evan Shefflin, Richie Reid plus Darren and Adrian Mullen.
Incidentally, Fennelly’s take wasn’t his biggest haul of the campaign.
In the first round of the Leinster club championship he lashed home 4-4 in the demolition of Naomh Éanna (Wexford).
Brian Cody told the ’People he hoped captain of last year, Cillian Buckley, would be able to resume hurling shortly, but there was no deadline.
The Dicksboro defender, who has had surgery on a knee injury, hasn’t played with the county since last July.
He played one match with Dicksboro during 2018.
Padraig Walsh missed the Cork match with a muscle strain, and former All-Star Ger Aylward is all but ready go after picking up a hamstring injury.
Robert Lennon (Bennettsbridge) had surgery on a hip injury, so he will be out of action for a while.
Kilkenny’s Leinster Round Robin fixtures programme is - v Dublin in Nowlan Park, May 11 (7pm); Carlow v Kilkenny in Netwatch Cullen Park, May 19 (3pm); Kilkenny v Galway in Nowlan Park, June 9 (2pm); Wexford v Kilkenny in Innovate Wexford Park, June 15 (7pm).