Super Shamrocks turn Croker into their personal theatre of dreams 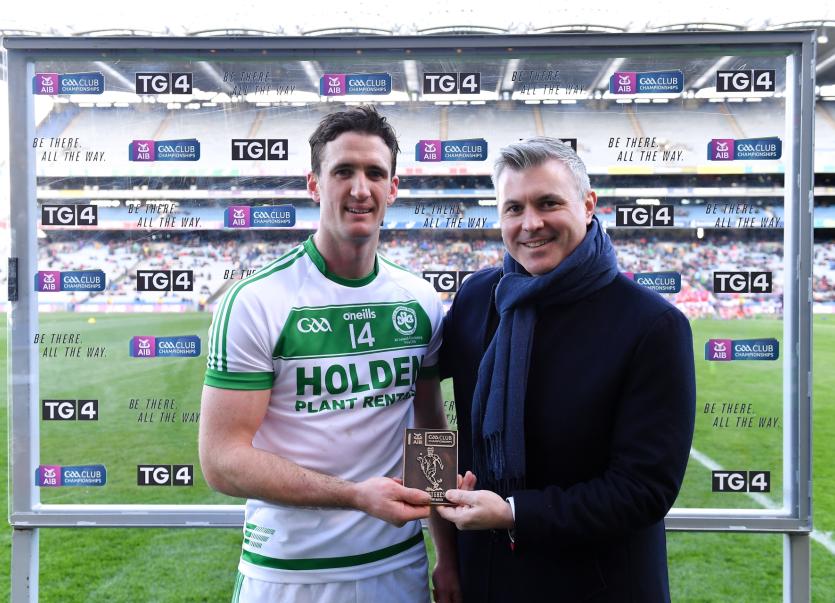 Man of the match, Colin Fennelly, who scored 2-4, is presented with his award

There was magic from man of the match, Colin Fennelly, from Adrian and Patrick Mullen and TJ Reid too as Shamrocks took home the Tommy Moore Cup they last won in 2013.

Colin Fennelly broke St Thomas hearts as he helped himself to 2-4 from play. He was simply on fire. The opposition couldn’t hold him no matter what they tried.

Fennelly didn’t finish the match. He injured his left knee and came off in the 64th minute so as not to do further damage.

As Shamrocks had committed their five subs by that time they were forced to finish out with 14 men, but there was no catching them, even when eight additional minutes were added on at the end of normal time.

St Thomas had a 65th minute goal from David Burke, but that didn’t threaten a Shamrocks party that began to take shape as early as the third quarter.

The winners turned over with use of the wind leading by 2-10 to 1-8. St Thomas tore into them early in the second half, but Shamrocks surrendered just one point to Darragh Burke before they took over and put on a scoring show.

The Shamrocks points flowed from all angles and distances, six in-a-row. Eoin Cody opened the explosion of scores, with an assist from Fennelly. T.J. Reid was next up, then Patrick Mullen at the end of a great move involving Eoin Cody and TJ Reid.

The golden scoring rush was continued by Brian Cody, TJ and Patrick Mullen again to drive Shamrocks into a winning position of 2-16 to 1-9 in the 45th minute.

It was a day for the shamrock all over the country, and the hurling Shamrocks turned Croker into an arena of celebration of the beauty of the ancient game.

Shamrocks, playing into the wind and attacking the Hill 16 end, started like an out of control express train. Within five minutes they were motoring when already 1-4 to 0-1 clear.

The game plan was obvious. Get fast ball from defence to full-forward, Colin Fennelly and let him, with speed and touch, do the rest.

Fennelly scored the first goal, scooping home a ball from the right of the square after his initial viciously struck effort was saved. The Kilkenny star continued to torment St Thomas, and by the break Cathal Burke, Sean Skehill and Fintan Burke had all seen duty against him.

St Thomas steadied after points from Darragh Burke and Bernard Burke were followed by a 10th minute goal from a penalty. A needless tackle on Damien McGlynn led to the award, and Conor Cooney drilled home the penalty to cut the gap to 1-4 to 1-3.

A wonderfully created Shamrocks point by Evan Shefflin with a cross-field pass to scorer, Adrian Mullen and then a second from a free by TJ Reid helped steady the winners, but St Thomas hit back.

Scores from Darragh Burke and Damien McGlynn were followed by a great equaliser from 70 metres by James Regan (1-6 each), but then enter Colin Fennelly again.

This time the Kilkenny attacker produced a beautiful flicking point that might have been a goal. The second goal he had threatened arrived in the 22nd minute, and it was one born out of cunning and invention.

Adrian Mullen delivered in a ball that looked to be going wide to the left of the St Thomas goal. Fennelly threw himself at the ball, and with two defenders around him, the goalie coming to cut down the angle, he dived to divert the ball across the goal and into the net.

That piece of genius took Shamrocks into a decent interval lead of 2-10 to 1-8. But the show was only beginning.