Seconds out - these Kilkenny boxers are ready to Fight into Light! 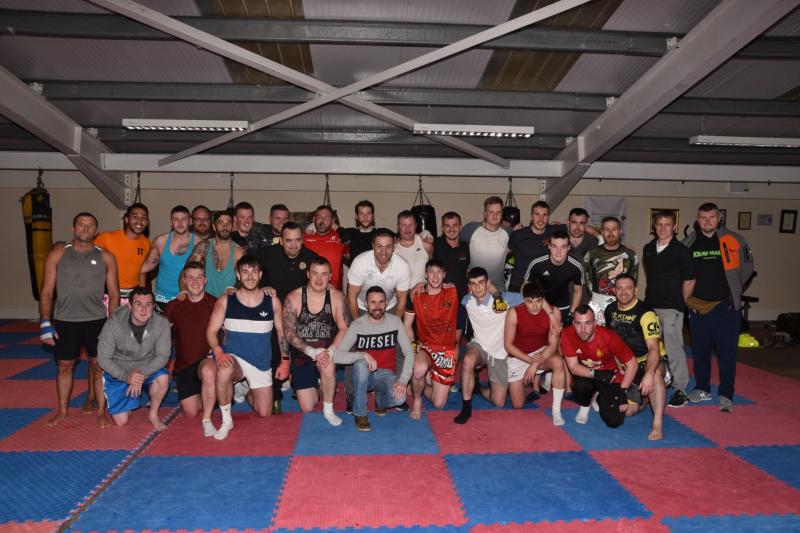 Olympic silver medallist Kenneth Egan was in the Kilkenny Combat Academy to coach the fighters for their white collar tournament in aid of Teac Tom PICTURE: HARRY REID

A group of Kilkennymen are getting ready to step into the ring for the fight of their lives.

The dedicated crew, who come from all walks of life, have signed up for the Fight Into Light boxing night, a charity event designed to raise money for Teac Tom and Cuan Mhuire.

For the last few months the group has met religiously for training at the Kilkenny Combat Academy, where Owen Doyle and his coaches have been putting them through their paces ahead of the big night this Friday. The fighters will deliver a packed card in front of friends, family and supporters at the O’Loughlin Gaels gym, with the proceeds going to help the two organisations.

The reaction has been overwhelming, with a number of boxing stars like Paddy Barnes, Carl Frampton and Michael Conlon sending on messages of support. This week the feel-good factor kicked up a notch when the locals were given a training session by Kenneth Egan, Irish Olympic silver medalist at the Beijing Games.

For one fighter, taking part in the event is a way of not just raising money but to remember two sporting friends who passed away recently.

“Mick Conville and Barry Delaney got things going before Christmas when they started organising this white collar boxing tournament,” said Damien Raggett. “I decided to get involved after we had some tragedies in Kilkenny around that time, deaths of people I would have known from sporting circles.

“That really hit me,” he said. “I decided to do something about it. Through my own experiences I’ve always been outspoken about mental health, so I felt it was time to do something to help others. I went to Mick and Barry and said I’d like to get involved - now here we are with a little over a week to go to fight night!

Raggett is better known for his soccer skills, but was drawn to the ring after injury ended his career.

“Some lads I’ve played against might say I should have been in a boxing ring,” he said with a smile, “but I got into it after tearing my cruciate playing soccer.

“I tried to come back but it didn’t feel right so I stopped playing and started coaching my son’s team. By not playing my weight went up - it wasn’t until I came up here that I saw how much I had put on, so this has been great to help get me into shape.

“Everything was new in the training - I lost two stone - so it’s been a boost and something that makes me want to keep this up once this event is finished.”

Boxing has been good for the Stoneyford native, not just from an exercise perspective but a mental angle too.

“Everyone thinks that men don’t show their feelings, but an event like this, for a good cause like Teac Tom, shows that everyone cares,” he said. “When you look around at all the lads training you know everyone has been affected by suicide in some way, whether through family or friends - they’ve all fought that battle before getting into the ring. 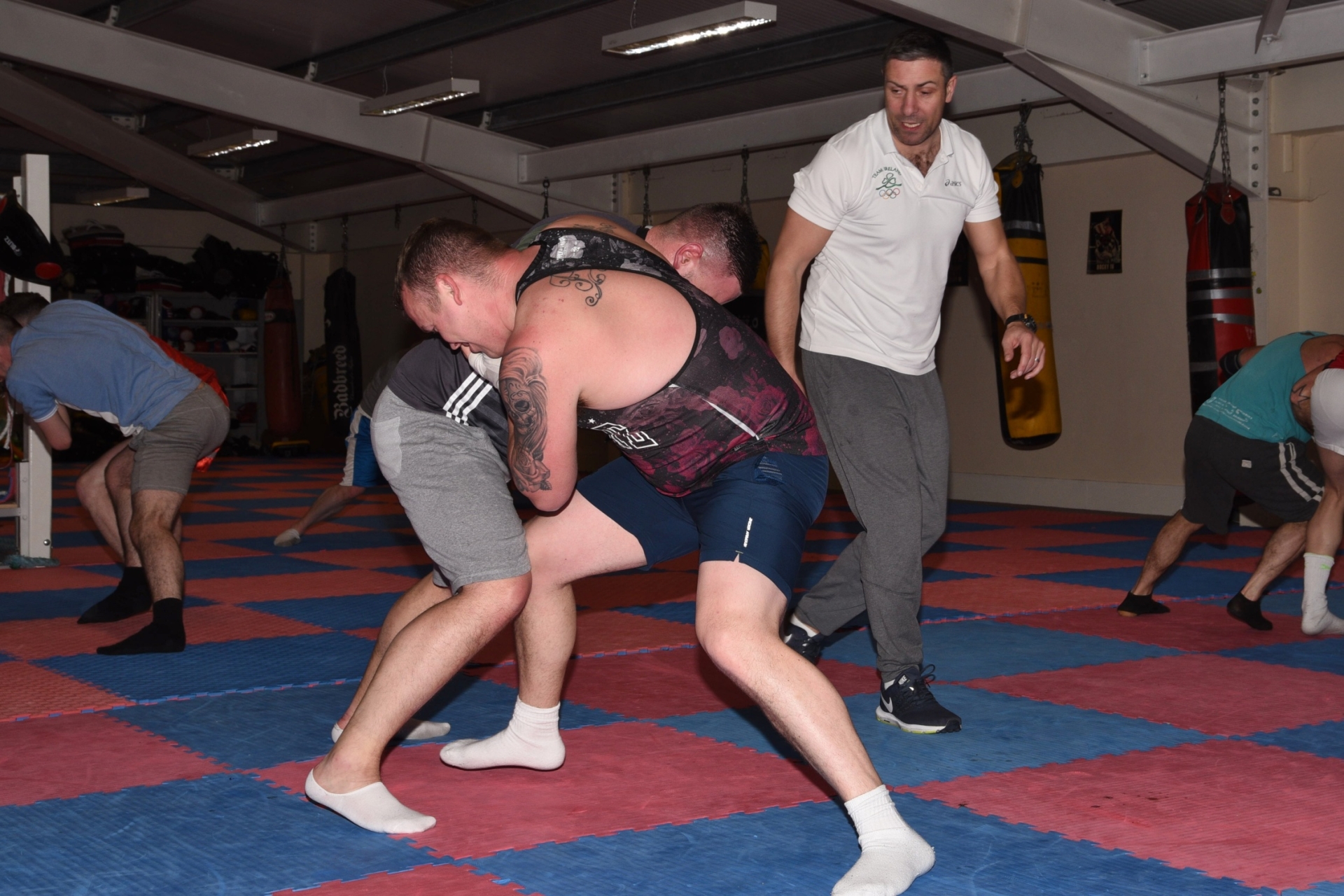 Irish Olympic boxer Kenneth Egan puts the fighters through their paces as they train for the charity boxing tournament PICTURE: HARRY REID

“You’d rarely meet people who haven’t been touched by it,” he continued. “In the 10 weeks we’ve been together training some of the lads here have lost friends through suicide. You see people going through situations like that but the big thing about this group is that everyone has looked after each other. Everyone in the group has been there to encourage them to come to training, to talk things out and to stay involved.”

The great spirit has even flowed among men who will face off against each other in the ring!

“My opponent on the night, Decky Casey, and I have been helping each other out throughout the whole experience,” he said.

“Everyone wants to win, but people have become great friends because of it."

As the fight night draws near the boxers have been overwhelmed by the level of support they’ve received.

“The support has been incredible,” said Raggett. “We’ve set up gofundme pages and have received donations from America, Australia, all over. We started out at the Kilkenny Combat Academy with Owen Doyle, who has looked after us so well, but within two days we’d sold out the venue. O’Loughlin Gaels came on board and helped us with a venue so we could have up to 700 people on the night.

“There are sponsorship cards, fight sponsors, tickets - it’s been brilliant,” he said of the experience. “I don’t think I’ll ever forget it.”

The fighters continued their build-up to the big night when Kenneth Egan came to Kilkenny to put them through their paces. Egan, who won a silver medal in the light-heavyweight boxing final at the 2008 Olympic Games in Beijing, put on a training session that went down a storm with all involved.

“I’m an advocate for mental health,” said Egan. “I’ve had my own struggles in the past so to be able to give back is great.
The commitment from the lads has been something else,” he said of the Kilkenny fighters. “They’ve worked non-stop and whatever I asked them to do in our training session they did. They showed massive interest and seemed to enjoy it.”

Egan praised the group’s spirit, highlighting the positives of their work in and out of the ring.

“Physical activity is of massive benefit to mental health,” he said. “They can work together and laugh together. It’s a positive distraction - they’re not sitting on their own, going down the wrong road. They’re here in the gym, bouncing off each other and having fun.” 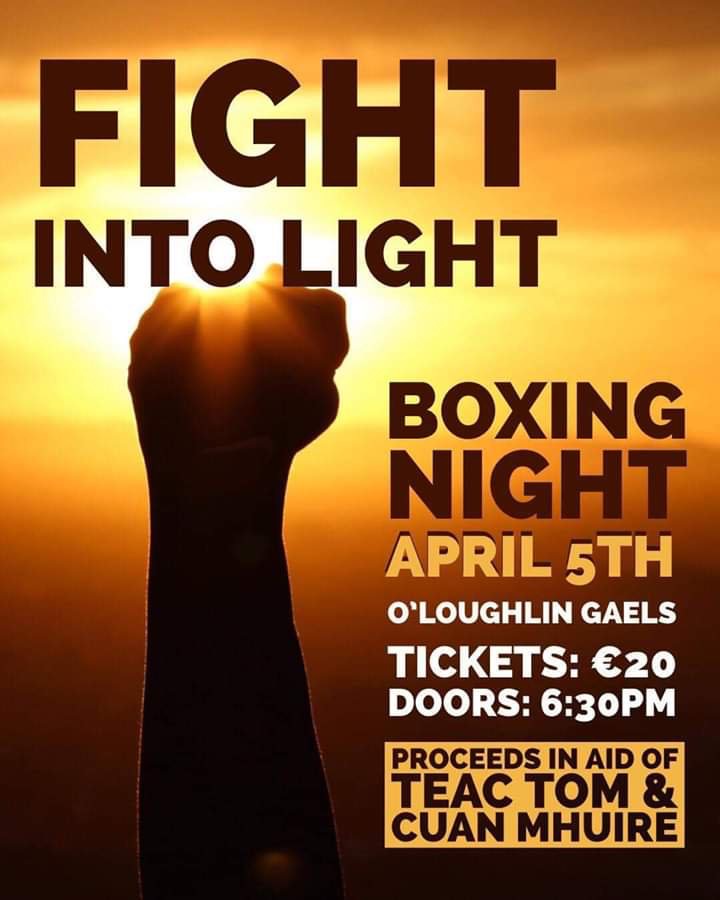 And he had plenty of advice for the group, many of whom were stepping into the ring for the first time.

“It takes great courage to step into a ring, no matter what level you’re at,” he said. “When I fought in an Olympic final my nerves were gone. I was boxing 20 years before that final so I can only imagine what they’re feeling!

“The lads are stepping out of their comfort zone but they’re putting in the work for a great cause,” he added. “I told them to enjoy this, to smile when they’re getting into the ring. Get in there and give it everything - it’s something to remember.”

The Fight Into Light boxing tournament will be held in O’Loughlin Gaels complex on Friday. Tickets are €20, with doors opening at 6.30pm. For more information visit facebook.com/fightintolight or log on to gofundme.com/fight-into-light-boxing-night to make a donation.