Carlow Kilkenny get back to winning ways 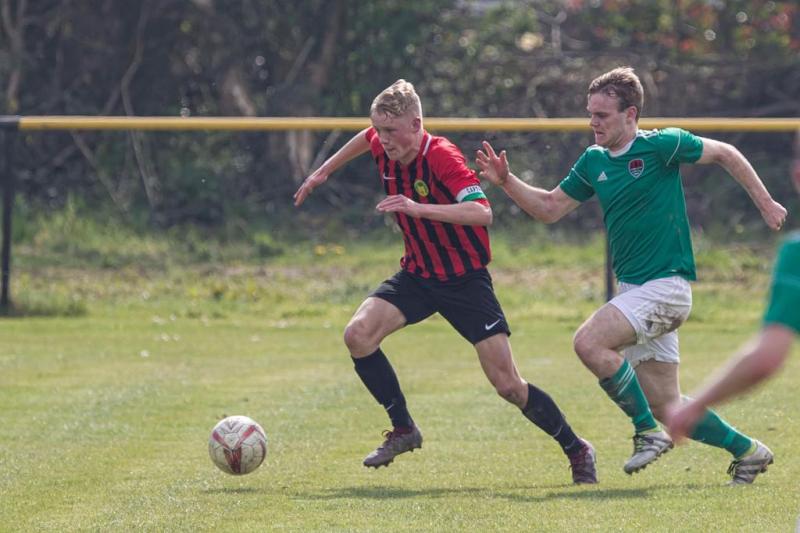 Action from the Carlow Kilkenny v Cork City game in Derdimus, which the local side won 2-1

The Carlow Kilkenny under-17s got back to winning ways when beating Cork City in Derdimus.

Having lost to UCD last time out, the locals fought hard to get the win. Cork City brought the intensity in the first half and laid siege to the home side’s goal throughout, but the hosts defended well and took their chances when they came.

The first opportunity fell to the visitors 10 minutes in. Ramon Gaspar drilled in a cross from the left, Sean McGrath getting onto the end of it, hitting the post.

Bill Hughes was called into action in the goal as Cork continued to press. He palmed over Barry McCarthy’s free kick from the left before saving from Rob Geaney-O’Brien after some good work from McGrath down the left to set him up.

Cork kept pressing and got their reward 17 minutes in thanks to a impressive solo effort from Evison Shllaki-Bramani. The goal had been coming with McGrath again going close just two minutes before, steering his shot wide after some good work to get into a scoring position.

Cork weren’t done there and kept threatening. Geaney-O’Brien burst through on goal but struggled to control the ball properly.

However, it was Carlow-Kilkenny who scored next against the run of play. Oscar Brennan jumped on a mistake in the defence down the right, teeing up Ross O’Brien to get a shot off and equalise three minutes from the break.

It was a rather lacklustre second half with Cork struggling to finish with the hosts proving difficult to get past in defence. O’Brien went close on the hour mark, getting on the end of a cross, but he couldn’t control his header.

Lee Day threatened with a cross from the right but it was deflected out, the City defender narrowly missing the back of his own net 10 minutes from time.

The period of pressure paid off when Matthew Geoghegan got onto the end of Day’s corner from the right and slotted it in seconds later.

Carlow Kilkenny continued to threaten with Geoghegan going close from Day’s free, heading across the face of the goal.
They had to survive a nervy last few minutes as Cork hunted to try and get something out of the game. With four minutes to go, Issa Kargbo found himself through on goal, a last gasp tackle denying him. Kargbo and James O’Leary both went close with efforts late on but could not finish, leaving Carlow-Kilkenny with all three points.