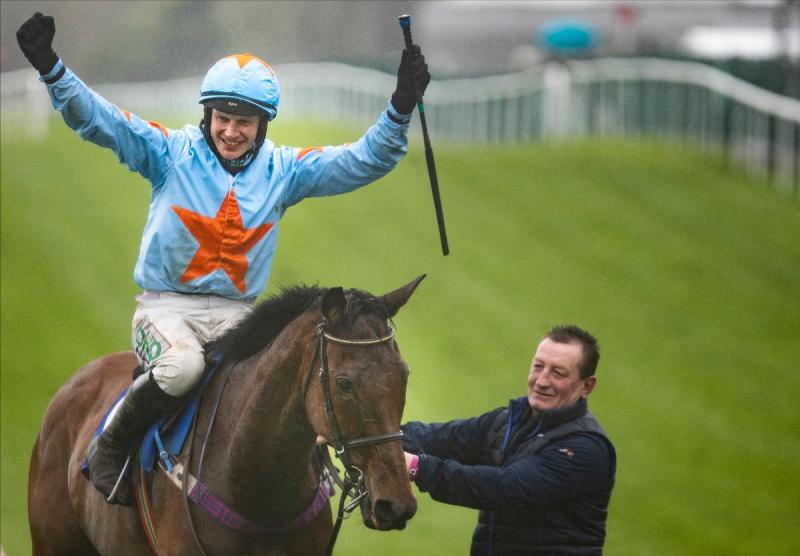 Paul Townend celebrates a popular success in the BoyleSports Champion Chase on Un De Sceaux during day one of the Punchestown Festival PICTURE: Racing Post Photos

The brilliant Un De Sceaux lit up the opening day of the Punchestown Festival with a typically brilliant display that saw him make it back to back victories in the Grade 1 BoyleSports Champion Chase.

The hugely popular 11-year-old looked to have his work cut against his stablemate Min but the Willie Mullins charge produced a thrilling display to notch up a fourth victory at this meeting. The Edward O’Connell-owned gelding did battle with Min for much of the race but that one had no answer when Paul Townend and Un De Sceaux moved on after the third last fence.

"He’s a great favourite and I thought that was just an incredible performance from an 11-year-old to do that in a race like that," said the proud trainer. "He’s a horse with incredible energy and he’s like that every morning, I just don’t know how he does it.

"Paul said he was a passenger for three quarters of the way and that’s just a great feeling for a jockey to have," added Mullins. "I thought that the ground was against Un De Sceaux but he came here a fresh horse and that’s helped him. Min was possibly a little flat after Aintree but maybe at this stage of his career he wants an extra half mile too."

The crowd favourite turned for home with a useful lead and once he cleared the last the stage was set for the eleven-year-old to record another great success. Un De Sceaux defeated Min by four lengths and there was a further 38 lengths back to third-placed Castlegrace Paddy.

"It was some adrenaline rush," said Townend. "He was brave as a lion. I asked him plenty of questions, the fuel tank was running low coming to the last and after asking a horse so many times, probably the wrong thing to do is the opposite to what you have been doing, but he figured it out himself.

"What a warrior," the rider added. "He is a horse of a lifetime. The way he races, to keep coming out and putting in performances like that – I was actually a bit worried when I got to the start, because he was a bit dead in himself doing the parade but once we lined up he came alive. That was some buzz."

The first of the week’s Grade 1s, the Herald Champion Novice Hurdle, went to the irresistible duo of Willie Mullins and Ruby Walsh as Klassical Dream followed up last month’s victory at Cheltenham. favourite took over the lead from the pace setting Felix Desjy before the straight and went on to record an impressive five and a half length success.

"He was quite hot in the preliminaries and I left the ear plugs in today," said Walsh, who won this race for the fifth time. "I took them out in Cheltenham, and I wasn’t gone a furlong today and I was wishing I had taken them out again. He jumped super most of the way. I probably took it off Jack (Kennedy, Felix Desjy) soon enough, but I never got to him at Aintree and I wanted to be sure that I would get by him and put the race to bed.

"This horse is a top-class novice, he won his maiden at Christmas, won at the Dublin Racing Festival and went to Cheltenham and has come here, what more else can he do," added Walsh. "He has a huge future. You would imagine that he should mature for a summer’s grass and should improve again."

Willie Mullins was equally impressed with the efforts of the winner and indicated that he may keep him over hurdles next season.

"He is a very good horse and maybe we will look at going down the Champion Hurdle route next season," the trainer said. "He was very good today and did everything Ruby asked him to. Ruby felt he probably was too relaxed but I was actually pleased to see him settle the way he did."

Delta Work capped a strong finish to day one for Gordon Elliott as he eased to victory in the Grade 1 Dooley Insurance Group Champion Novice Chase.

The Gigginstown House Stud-owned six-year-old lost his unbeaten record over fences when third in the RSA at Cheltenham but he ended his season a high under Davy Russell. The 13/8 favourite cruised through the race and was still on the bridle as he eased away from the field facing up to the last two fences. Delta Work finished a dozen lengths ahead of Discorama with third going to the Cheltenham winner A Plus Tard.

Earlier Elliott won the Goffs Land Rover Bumper for the third time as the €30,000 purchase Festival D’ex began his career in the best possible fashion. Top amateur Jamie Codd sent this four-year-old to the front with over a furlong to run and Festival D’ex ran right away from his rivals to win by 10 lengths.

Pearl Of The West gave locally born trainer John McConnell his first winner at this fixture in the Killashee Handicap Hurdle where she was partnered by Robbie Power. The 12/1 chance defeated Cosmo’s Moon to record the seventh victory of her career and her biggest success to date.

“She’s just such a good jumper, hurdles make a big difference to her. I was worried about the ground with the rain that fell this morning but it was fine for her and the race worked out really for her. I suppose we’ll have to consider looking at some big handicap hurdles in the future,” said McConnell.

As he has done on so many occasions in the past Enda Bolger supplied the opening winner of the week but not in the order expected as the Ray Barron-ridden Blue Templar upstaged his odds on stablemate Youcannotbeserious in the Kildare Hunt Club Fr Sean Breen Memorial Chase For The Ladies Perpetual Cup. The first two home are owned by JP McManus.

Front View rounded off the day’s action in the Sanctuary Synthetics Flat Race where he provided J P McManus with his second winner of the day. The Joseph O’Brien-trained and Derek O’Connor-ridden grey battled on bravely for the last furlong to beat Jungle Junction by a length.

The attendance on day one of the Punchestown Festival was 17,464. Racing returns on Wednesday where the Coral Punchestown Gold Cup is the feature on an eight race card which begins at 3.40pm. Ireland's two highest rated chasers, Al Boum Photo and Kemboy, will clash in the race of the season so far.