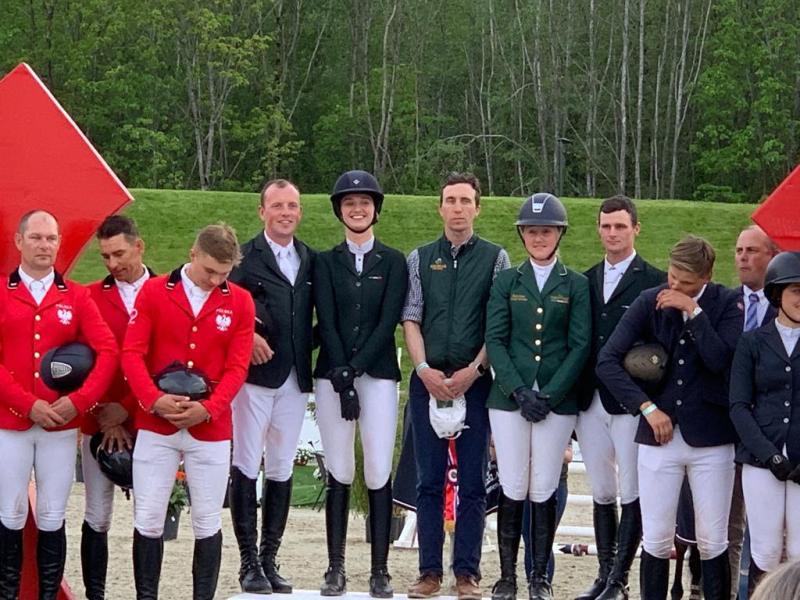 Susan Fitzpatrick and Ger O'Neill flew the flag as the Irish team stormed to success in Norway. Led by Chef d’Equipe, former Army rider Shane Carey, Ireland were in a share of the lead at the halfway stage of the 14-team competition, matched only by the home team from Norway.

Tyrone’s Jenny Rankin (23) and the Deirdre Bourns-owned Bennys Legacy got the Irish off to an excellent start, jumping clear with just a time fault. Laois’s Aidan Killeen (29) and Fair Play, owned by H.P.J. Verdellen, were the discard score in the first round with five faults, while Kilkenny’s Susan Fitzpatrick (20) with Fellow Castlefield, owned by Sharon Fitzpatrick, came home with just one fence down. Another Kilkenny rider, Ger O’Neill with the Martin Egan-owned Castlefield Vegas (ISH), jumped a perfect clear round to mean Ireland would finish the first round level with Norway on five faults.

The second round saw Rankin complete a brilliant performance by jumping clear inside the time and when Killeen and Fitzpatrick both recorded just a single fence down each, Ireland began to take control. Norway had slipped to third place at that stage however a good second round from Poland saw them finish on a two round total of 13 faults, meaning a fence down for O’Neill would result in a jump-off.

The Bennettsbridge native showed no sign of pressure and knowing he could afford a time fault but not a fence. O’Neill did just that and crossed the line with just a time fault aboard his Irish Sport Horse to leave Ireland as winners on a 10 fault total ahead of Poland in second. Norway finished third ahead of Germany in fourth, Spain in fifth and Netherlands in sixth. Japan finished seventh while France came home in eighth place of the 14 teams that took part.

Afterwards, a delighted Chef d’Equipe Shane Carey joked that the pressure of watching a Nations Cup rather than riding in one was a very different experience:

"This could be my debut as Chef d’Equipe and also my retirement at the same time!" he joked. "I must say standing on the sidelines and watching was more difficult than I thought! It was difficult here, they have a new arena and it’s a really good show. It was a strong competition and even though we had four really good horses with four very good riders, it came down to the wire. We had a pole down here and there, otherwise we maybe could have finished it off earlier on but I must say I was pretty confident that we had as good a team as any here.

"Ger’s horse is still relatively inexperienced, it won a Junior Gold medal last year with Jason Foley who rides for Ger but the horse is still only a nine-year-old and we had three nine-year-old’s on this team. It was a tough course today and they all coped very well. Ger was under a little bit more pressure as last to go as he knew he had to be better than four faults to win it for us but he didn’t look like he was under pressure the way he performed. The two girls, Jenny and Susan did a superb job and I must say Aidan too was excellent with a young horse.

"The other Nations cannot understand how we can pull out rider after rider that can ride like this, we really have outstanding riders coming through and I have no doubt that some of this team will make the breakthrough to the first team in the near future," Carey added. "I want to give a special mention to all the background team, to the owners, grooms, sponsors and trainers who made this win possible."