Davy Mulcahy the hero as Evergreen eye another Kilkenny double 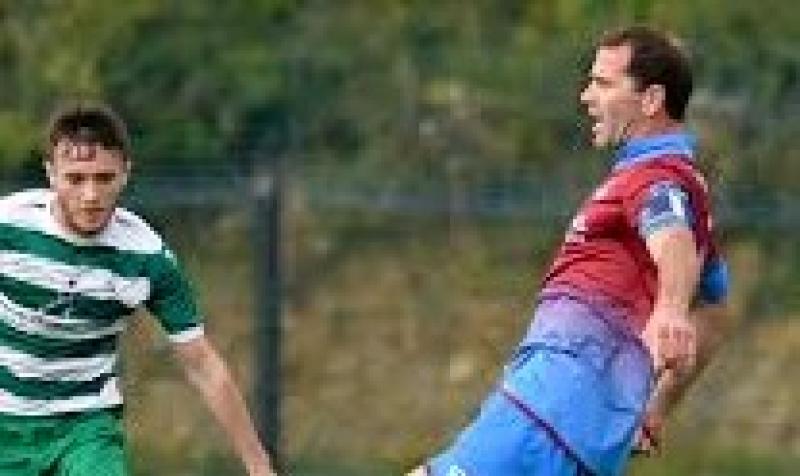 The much travelled Davy Mulcahy was the hero of the hour when Evergreen set-up a shot at another big Premier League/cup double in the Kilkenny and District League.

The 41-year-old came off the bench to shoot the winning goal in the 88th minute as Evergreen got the better of city rivals, Freebooters A in the McCalmont Cup semi-final in Derdimus this afternoon.

Mulcahy was left to merely steer the ball home from about seven yards when he got to the end of a left wing cross from Chris Whearty that laid bare the ’Booters defence.

The match looked like going to extra-time until Mulcahy and Whearty combined to win the ticket into the final against Fort Rangers. The final will be played in Derdimus on Saturday (6.30pm).

Freebooters looked the more menacing team during the opening half when they went close to scoring on two occasions. David Grincell cracked an early effort over the bar from the edge of the box and in the 19th minute their most industrious attacker, Conor English, saw a close range free kick rebound off the Evergreen wall and then the cross-bar before going over.

The winners were much more aggressive in the second half. They hit the front in spectacular style when Jamie Owens cracked home a brilliant left footed goal from 30 yards in the 56th minute.

Within three minutes Freebooters were level. A free from the left by English saw the ball evade defenders and attackers alike before it ended up in the net.

Evergreen’s Sean Barcoe did have the ball in the net in the 70th minute, but the effort was ruled out for off-side, which left Mulcahy to decide it with time running out.

Mulcahy has played over 15 seasons in the League of Ireland after starting with Kilkenny City in the 1999/00 season. His last club was Shelbourne, who he played with until August 2018.