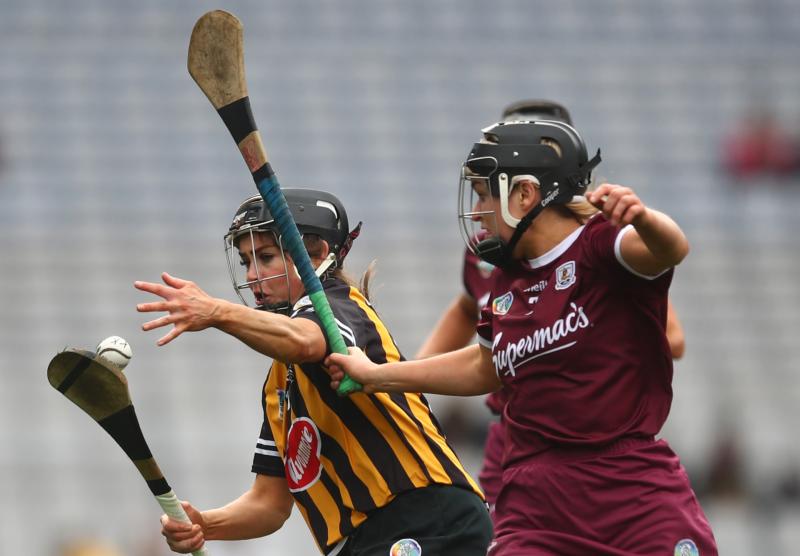 The Kilkenny camogie team enjoyed themselves in Wexford, maintaining their 100 per cent start to the Liberty Insurance All-Ireland Senior Camogie Championship thanks to a mammoth 7-28 to 0-6 win over the Model County.

Katie Power helped herself to a hat-trick of goals at Bellefield, while Miriam Walsh nabbed a brace. Anne Dalton and substitute Michelle Quilty also shook the rigging, while Aoife Doyle caught the eye with five points from play. Denise Gaule, Player of the Match in the opening round win over Galway, contributed eight.

Chloe Foxe provided one of the few bright points for Wexford manager Barry Kennedy, the St Martin’s sharpshooter providing all her team’s scores.

League champions Galway have registered their first victory of the Liberty Insurance All-Ireland Senior Camogie Championship, beating Offaly by 3-15 to 0-6.

Cathal Murray’s troops had to cede to Kilkenny last week but remain among the leading contenders for ultimate honours and though they took to the field in Lusmagh minus the services of Niamh Kilkenny and Ann Marie Starr, they still had far too much firepower for the home team.

The Maroons led by 0-7 to 0-1 at the interval. The brilliant Ailish O’Reilly opened the scoring and though Michelle Teehan equalised, it was a rare attacking contribution by Offaly, with O’Reilly in particular enjoying herself at the other end, while Niamh Hanniffy, Ciara Murphy and Aoife Donohue also contributed.

Any hopes Mike Wall would have had that his charges could turn it around in the second half were blown away by two goals straight after the restart from Catherine Finnerty and O’Reilly. There was no way back from there and Finnerty grabbed her second major before Offaly’s woes were compounded right at the death with the dismissal of Aisling Brennan.

In Group 2, Niamh Rockett supplied a captain’s in a 1-11 to 1-5 triumph over Dublin at Walsh Park. Rockett’s aerial prowess was a feature of this game, allied with a goal and two points from play, while Beth Carton shot eight points and Trish Jackman was imperious.

Rockett raced onto a delivery from Jackman directly from the throw-in and pointed from tight to the left sideline after just 16 seconds. Orla Hickey and Carton also found the target to give the hosts a three-point lead in under two and a half minutes.

The scoring rate slowed considerably as Dublin got to grips with the Déise attack. Aisling Maher got them off the mark from a ninth-minute free and when Kerrie Finnegan goaled in the 24th minute, Frank Browne’s crew held a 1-2 to 0-4 half-time advantage.

Waterford did have the benefit of a breeze in the second half but though Carton split the posts four times, Dublin remained in contention and a converted free by Maher restored parity, which is how it remained until Rockett made the definitive strike in the 52nd minute.

It came from a brilliant sideline by Jackman that Ciara Tierney batted away and the onrushing Rockett sent the sliotar to the roof of the net on the half-volley. It was all Waterford from there to the end, three points from Carton ensuring the verdict for Donal O’Rourke’s unit.

Elsewhere in the second group, All-Ireland champions Cork came good in the second half to see off a Tipperary 2-20 to 1-8 in CIT.

The sides were level at the change of ends, 0-10 to 1-7, points from Orla O’Dwyer and Grace O’Brien helping Tipp establish an early lead and though Katrina Mackey and Orla Cotter replied for Cork, a brilliant goal by Megan Ryan after a powerful run gave Bill Mullaney’s outfit the lead once more. Julia White and Cotter were on the mark for the Leesiders before Miriam Campion levelled with a wonder score from distance.

Paudie Murray got a reaction from his players and they gradually pulled clear, Linda Collins, Orla Cronin, Mackey, Cotter and Chloe Sigerson raising white flags and Sigerson goaling from a late penalty as Cork made it two out of two.

In the  late throw-in, Clare secured their first victory of the campaign by the minimum margin, 0-12 to 0-11 at Páirc Táilteann.

Eimear Kelly, Sinéad Conlon and a long-distance score from Claire Hehir on her 21st birthday pushed the Bannerwomen five clear but scores from long-serving Jane Dolan and a wondrous mid-air double by Grace Coleman reduced that and had it at 0-7 to 0-4 in favour of Ger O’Connell’s squad at half-time.

The gap was still three points when Meath lost Kristina Troy, sent off on a second yellow card in the 50th minute but Dolan brought them level on the hour with three minors, only for Mairéad Scanlon and Chloe Morey to push Clare two clear again.

Though Megan Thynne halved the deficit, they fell just short of what would have been a historic draw for the Royals in just their second season at the highest level.