Kilkenny's splendid team effort and goal from O'Sullivan down Clare 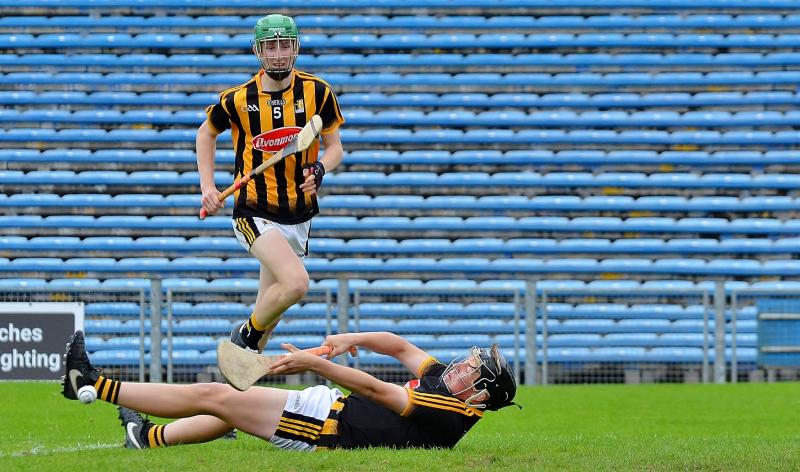 Kilkenny goalie, Aidan Tallis brings off a great save

A splendidly worked team goal in the 40th minute put Kilkenny on the way to victory over Clare in the All-Ireland minor hurling championship quarter-final, round 1, in Semple Stadium, today.

Inside forwards Billy Drennan and Timmy Clifford worked hard to steal the ball from an opponent on the ‘50’. When the sliotar was delivered smartly inside midfielder Andy Hickey produced a lovely flick to lay the losers defence bare and send Colman O’Sullivan through for a big score.

That well-worked and taken goal shot Kilkenny 2-10 to 0-10 in front, and suddenly the winners effort gained serious momentum. Billy Drennan shot a hat-trick of points to up the divide to 2-13 to 0-10 by the 48th minute, and it was game over from Clare after that.

Kilkenny play Galway in Round 2 of the quarter-final series next weekend, and if they can avoid a defeat there they will drive through to the All-Ireland semi-finals. If not, they will have to await the outcome of the Clare/Galway game the following weekend.

There was nothing between the teams during the early stages when it was step for step as the opening six scores were evenly shared. Most encouraging for Kilkenny was the fact they showed no hangover following the defeat by Wexford in the Leinster final last Sunday.

The Cats hit the front again in the ninth minute when Billy Drennan pointed. The Galmoy lad repeated the act before the end of the quarter to leave Clare 0-3 to 0-5 behind.

The biggest divide opened up in the 22nd minute after Pierce Blanchfield bagged a fine goal for Kilkenny from a tight angle on the right, and almost immediately Jack Doyle drilled over a point.

Kilkenny were 1-6 to 0-4 clear, which looked a good position to be in against a team playing a five man attack.

Clare finished the half strongly, however. They had points per Cian Galvin (65), Shane Meehan, who was deprived of a goal by ’keeper, Aidan Tallis, who turned a close range shot over the bar, and then Meehan (free) to leave the divide at 1-7 to 0-7 at the break.

Seconds into the new half Kilkenny goalie, Aidan Tallis, brought off another super stop, this time from danger man, Shane Meehan. His colleagues made good that escape, Pierce Blanchfield shooting two fine points at the other end to take them 1-9 to 0-7 clear.

Clare replied at the double through Conor Hegarty before centre-back, Cian Galvin added a third point. Kilkenny had the next score from Drennan, via a free following a foul on Liam Moore, and then came the lovely goal from O’Sullivan that decided more or less it.