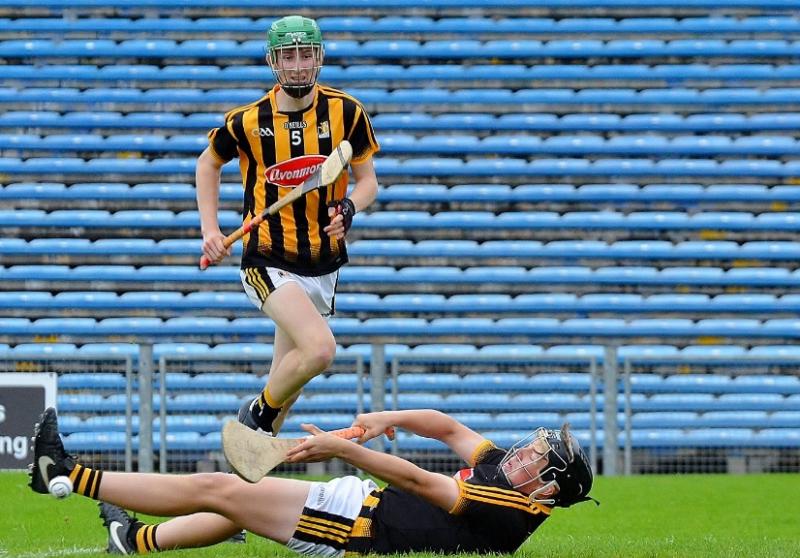 The daring young bucks who place no limits on what might or can be achieved are determined to have the black and amber flying on All-Ireland final day in Croke Park.
The Kilkenny minor hurlers, who were pitched as an ordinary lot from the throw-in at the start of the Leinster championship, have improved in leaps and bounds.
And on Saturday they will take on unbeaten Munster champions, Limerick, in the All-Ireland semi-final in Croker (4pm) with plenty of hope in their heart.
The battling youngsters have defied all the odds in climbing this high.
Although they have been beaten twice in the championship, by Wexford in the Leinster final and Galway in an All-Ireland quarter-final qualifier, they harbour hopes of making All-Ireland Sunday on August 18.
“We know how good Limerick are,” insisted Kilkenny manager, Richie Mulrooney. “There is a reason they are unbeaten. They are a very good team.
“There is a nice balance to their team, and their half forwards are particularly strong. In Cathal O’Neill they have a very, very special minor player.”
The Dicksboro clubman admitted it will take a huge, huge effort from the Cats if they are to down the Shannonsiders, but he was hopeful.
“Look, our lads have improved so much we are giving ourselves a great chance of reaching the final,” he suggested. “We are ready to go.”
The defeats were suffered in two of the last three games. In the middle tie, Kilkenny proved too good for beaten Munster finalists, Clare,
In their next outing against defending All-Ireland champions, Galway, the Noresiders were 12 points down at one stage during the first half, and 10 at the break (2-10 to 0-6).
Mr Mulrooney and his selectors - Adrian Finan, Sean Kelly, Martin Carey and Brian Ryan - switched their team about for the second half when springing attacker, Ian Byrne and defender, Zach Bay Hammond from the subs bench. Byrne proceed to shoot two goals, and Bay Hammond’s strong running from defence helped knocked back Galway.
The game swung. Kilkenny thundered back to level terms and missed a chance to go in front, but Galway regrouped and eventually won by 3-16 to 2-16.
Kilkenny outscored the Tribesmen by 2-10 to 1-6 during the closing half to clinch the ticket into the semi-finals, and in the process learned how well they could play when they got their game together.
“We are looking forward to the game,” Mr Mulrooney assured. “We played well in the second half of the last match against Galway, so if we can play to that level we would have a 50/50 chance of winning.”
This young group enjoyed no more than modest status when competing in inter-county competitions at under-14 and 15 level. But this season they have taken off as a group, and for one simple reason.
“They have worked really, really hard,” Mr Mulrooney insisted. “Every day they go out they are improving. To be in the All-Ireland semi-final is a huge achievement, and now we want to try and win it.
“This is just reward for hard work. This is a group of 33 fellows who have given absolutely everything for the jersey. They are like a club team they are so unified.
“There is great camaraderie there. Hopefully that closeness and bond, plus their hurling skill, will get them over the line.”
Saturday’s match will be Kilkenny’s eight in the competition. And the selectors insist there has been a huge improvement from the Round Robin stages in Leinster.
“We felt our performance against Wexford in the Leinster final was very good, except we didn’t put the scores on the ‘board,” Mr Mulrooney explained. “We produced a great performance against Clare in Round 1 of the quarter-final qualifying series, which also included defending champions, Galway.
“That perform was shown to be very good by the way Clare pushed Galway last Saturday. The second half against Galway was as good as anyone could have expected from any group at 16 or 17 years of age.
“They were exceptional during the second half when trying to get back into the game. If we can bring the quality of that second half play into our full game we will have a good chance.
“When you do that sort of thing once, you have to believe you can do it again.
“I think the second half against Galway has given the lads great confidence. We have seen that confidence come through in two very good training sessions since the Galway match.”
Everyone in the Kilkenny camp is fit and ready to go. The likelihood is that the selectors will stick with the XV who did duty in the second half against Galway, because during that period the team produced season high form.