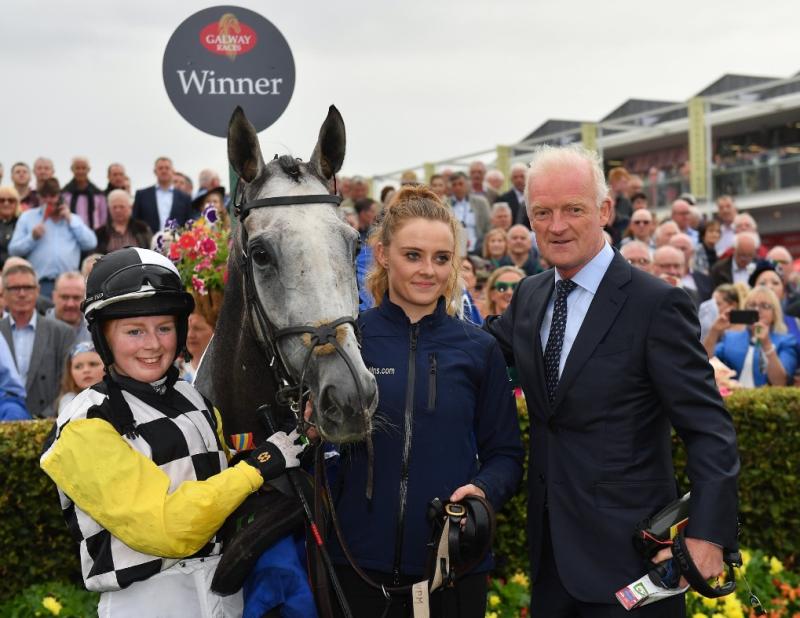 Having saddled Whiskey Sour and Uradel to victory in the last two years, Mullins fielded four this time with Mr Ajudicator sent off the 9-4 favourite for the Closutton handler.

However, it was 8-1 shot Great White Shark who triumphed in the hands of Jody Townend, sister of champion jockey Paul.
Townend had to show plenty of patience in the two-mile-one-furlong heat, with just a couple of runners behind Great White Shark turning into the straight.

However, when she gave the signal, Great White Shark finished with a flourish down the outside to grab the glory by a length and three-quarters from Dalton Highway with Litterale Ci third.

Mr Ajudicator suffered a troubled passage but eventually made late headway for fourth.

Townend was thrilled to register her first win since returning from injury in a high-profile prize.

“I can’t believe it - what a buzz,” she said. “It’s my first winner since I came back from injury so what a way to come back.

“I broke my T12 vertebrae and I had to get six screws and two rods put in. I was supposed to be back around February, but it got infected and the infection got into my spine so all the metal had to be taken out. I was nine months on the sidelines.

“She can be quite free, but wasn’t too bad today – I didn’t want to light her up and we were going a million. Willie said if I have to take it handy, then take it handy.

“Coming into the dip, we went for a gap and nearly got murdered,” added Townend. “So I said ‘we’ll go the wide route’ and once she got rolling up the hill, there was no stopping her.

“I’m with Willie from Monday to Thursday, and Ruby (Walsh) and Paul help me out whenever they can.

“I knew she had a fair chance as she had been working well at home.”

“It was fantastic for Jody,” said Mullins. “I think it was her first ride in the race. Some guys wait all their lives and never ride the winner of it, but Jody looked like an old hand, coming from off the pace.

“I just said to her ‘see how you break. If you don’t break well, wait and wait and come wide, and keep out of trouble’. And that’s what she did. Once the mare started to pass one or two horses, she found that she was liking it, and the two of them just took off.

“Jody said she couldn’t believe how well she was travelling in the dip and once she passed one or two, the mare just took off.

“I had this race in mind for her all along,” the trainer added. “She’d had a hurdle career and I thought this mare might improve on the flat.

“I said to Malcolm Denmark (owner) ‘we’ll go to Galway, there’s a nice race there’. But as things turned out, I think she would have been the outsider of our ones, but with Jody’s 7lb claim and her first run back on the flat after her little break, I thought anything could happen.

“That race is a bit like the Grand National – if you don’t get the breaks, look at our other horse, Mr Adjudicator, he got no breaks whatsoever. He had a slow break, got caught on the rails, never got out and was a fast-finishing fourth.

“Royal Illusion probably ran a bit too free at the start and Legal Spin didn’t look like he came up the hill.

“I was hoping Jody would take out a Flat licence, but she seemed determined to go point to pointing, but we’ll see now,” finished Mullins. “After watching herself on video on that race, she might change her mind. I like her – I think she would be a good rider on the flat.”