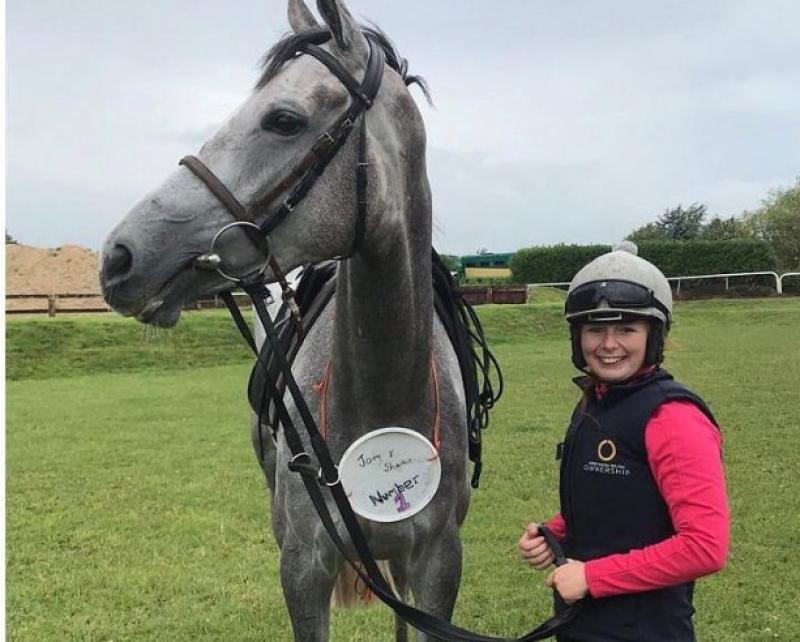 Jody Townend is the local jockey who has jumped into the national spotlight.
Her rise to prominence is thanks to a heartwarming victory on the Willie Mullins’ charge Great White Shark in a feature race at the Galway Festival.
Jody is the younger sister of Ireland’s champion jump jockey Paul Townend, but she is a star in her own right too with a gleaming future ahead of her.
After fracturing her T12 vertebrae last October — and then suffering multiple related setbacks, Jody capped a fantastic recovery with a brilliant ride on Great White Shark, in only her fourth race back in the saddle.
I met Jody last week after her fantastic win - needless to say she was still on cloud nine. I wanted to know how someone can bounce back from an injury, and the horrific infection that followed, to win the kind of big race that is a dream ride for all amateurs. So Jody took me back to that day last October when she crushed her vertebrae and needed emergency surgery.
She recalled how the mare she was riding fell at a hurdle while schooling for Willie Mullins. Her first reaction was to somehow stand up and run out of the way of the other horses racing towards her. After she reached safer ground, she let herself lie down and an ambulance was called immediately. She was rushed to Kilkenny’s St Luke’s Hospital and needed an MRI as her vertebrae was crushed. She was operated on the next day in the special spine unit at the Mater Hospital.

Six Screws, Two Rods
Townend had six screws and two rods inserted into her back to help it fuse and was told she’d be laid up for six weeks and could not ride for another six months.
Jody listened to the doctors’ orders but in February she suffered a major setback. Her wound started weeping and a big blister formed on her back. It was an infection that had been living off the metal in her back.
Townend had it washed out but was in awful pain. Three weeks later, the 21-year-old’s back literally burst open. The infection had set into her bones and the medics had to re-operate immediately. Luckily the bones had fused - but Jody had another six weeks of recuperation ahead of her.
Mentally this period was very challenging.
“Just as you think you’ll be riding out soon, something else would happen,” she told me. “There were some low days when I thought, ‘Am I only going backwards?’ I nearly drove my Dad and my sister Caroline crazy. I’d like to apologise to them now!”
That’s Jody, the redhead from Midleton, who has a great sense of humour and an incredible work ethic. But how hard was it to get back on the horse? She didn’t need much motivation.
“I was reared on National Hunt, so I have the bug,” she said. “I didn’t need much motivation, it’s in the blood!”
After three operations, Jody was back to work. She started riding out for Willie Mullins in early June and had her first race back in Roscommon on July 9.
She only found out that she would partner Great White Shark at the Galway Connacht Hotel Amateur Riders Handicap on the day before the big race.
For Jody, the news that she was in the race came as a nice surprise, but she felt she had a chance to win it.
“If Willie Mullins has picked you, you know you’re in with a chance,” she said. “It was only my second winner for him and my second year racing in Galway.”
So what was it like, that moment when she passed the winning post in front? Jody’s answer was that it was such a thrill, she had ask herself, ‘did that actually happen?’ when she was presented with the winning plate by the Taoiseach, Leo Varadkar.
“I was on such a high — I was up in the cloud somewhere,” she recalled. “Anyone could have handed me that plate!”
Jody has a wicked sense of humour and she told me the icing on the cake was when her brother Paul rode Great White Shark on the following Saturday in Galway — and came third!
Naturally, she speaks fondly about her illustrious brother Paul. As a child, she accompanied him every Sunday to every race. They’re a bit of a double act, she says — back in those early days she was like Paul’s shadow, following him everywhere.
She also credits him for the sound advice he has given her over the years — especially pointing out when she does things wrong!
We also talked about the rising number of female jockeys on the racetracks, especially in the UK. It was lovely to hear Jody say her idol is that superb jockey Rachel Blackmore.
“She is so down to earth and such a good rider,” said Townend. “She doesn’t know how good she really is.”
Jody doesn’t look at other jockeys as competition - she just goes out there to win. And win she does. To date she has four point-to-points and seven races on the track to her credit.
It’s no secret in racing circles that Mullins and Ruby Walsh would like her to go Flat racing.
“It’s their mission at the moment,” she said. “It’s something I will have to consider in the future, but you can’t beat the thrill of jumping — and I don’t know any other career that would give me such an adrenaline rush.”
Jody feels strongly that there shouldn’t be a division of the sexes in the racing world. She believes hard work and dedication will get you far. She credits some of her success to luck, too.
“It’s about being in the right place at the right time,” she added. “If I had been on my back for another couple of months I would have missed the opportunity of winning on the Great White Shark.”
She also believes that Irish racing has improved for female jockeys with the introduction of more Ladies races over the past two years.
So what’s on her bucket list of races that she’d like to win? Winning a race at the Galway Festival has already been ticked off, of course...
“I didn’t think I would win it that soon,” she said. “It’s the big race that all the amateurs want to win and she was a super ride.”
Unsurprisingly, she would also love to have a winner at Cheltenham some day, but if she goes Flat racing she may have to look further afield. A versatile horsewoman, she also plans to show jump at the Dublin Horse Show next year.
Watch this space!