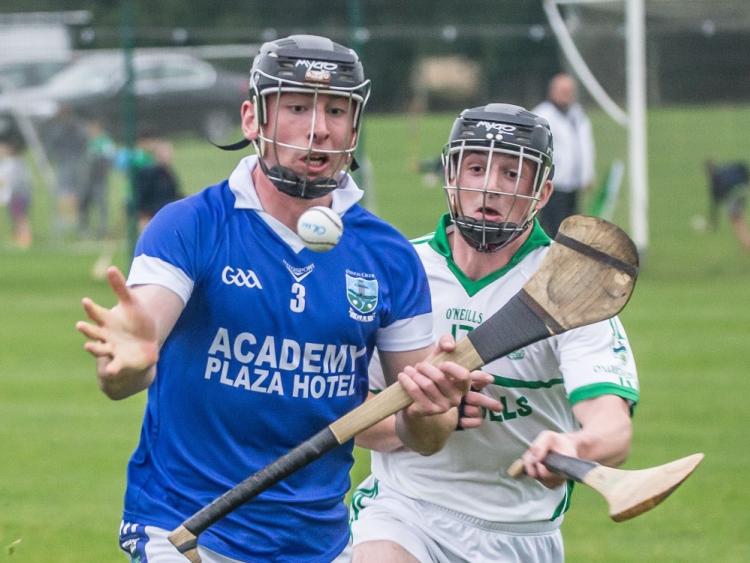 Conor Delaney in action for Erin's Own

The championship and All-Ireland final experiences are well behind us now, and it will be down to brass tacks for Kilkenny clubs this weekend and next when serious business will be decided.
It is back to local competitions and the quest for championship honours.
In real terms, one would suggest, the county got more than expected from the inter-county championship, but less than was hoped for from the final.
Let’s be honest, getting to the final wasn’t on the agenda for many until after the All-Ireland quarter-final win over Cork.
Expectations soared
However, the subsequent lashing of then flying All-Ireland champions, Limerick in the semi-final sent expectations shooting through the roof.
That was understandable, bearing in mind the strength, power and ferocity of the Kilkenny performance.
That Tipperary ended up with the MacCarthy Cup for the 28th time was down to the excellence of their play, the individual brilliance of players, their fortitude.
There are ‘perhaps and maybe’ situations attached to most games, and Kilkenny folk can spend all the time they like thinking about how the final unfolded.
The unalterable fact is that Tipp have Liam, and fair play to them.
A serious plus for Kilkenny, however, is the fact they have the bones of a fine team now after the championship.
I admit I knew nothing about the possible shape of the team after the National League campaign other than Eoin Murphy would be in goal.
Yet a formidable team and squad was shaped during the campaign.
A lot could change between now and next season, but there is no doubting the fact Kilkenny are in a far better place currently than when they exited the championship after the quarter-finals in 2018.
What could be classed as the auditions for the Kilkenny squad 2020 will commence this weekend when the action resumes in the senior, intermediate and junior leagues/championships.
Players who show form between now and the end of the championships in October won’t be missed by manager, Brian Cody - he is an avid attendee at games and until he states otherwise we class him as the Kilkenny manager - as the rebuilding process begins.
The action in the local leagues began with first round matches on Saturday, April 6.
Three rounds of games were squeeze in - see results next column - before the enforced break for the Leinster ‘Round Robin’ series.
Consequently, this weekend’s action will be in the fourth round.
These games will be followed by the all deciding fifth round ties the following weekend, when the finishing places in Group A and Group B will make up the draws for the first round of the knock-out championships.
By the way, all those matches on Saturday, September 7 will commence at the same time - senior 5.30pm and intermediate 1pm - so that no one enjoys any advantage.
No idea
After that the way will be clear for the start of the knock-out championship hurling on the weekend of September 21/22 (senior and intermediate).
Earlier, on the weekend of September 14/15 the junior championship, involving Section A and B teams, will commence the real knock-out fare.
Talking to club representatives, no one has any idea about form heading into the weekend action.
It will, more or less, be a shot in the dark for everyone because of the long break, plus the fact that a big number of young players headed to the US for the summer and most are only due home this week.
Some clubs didn't lose anyone during the summer exodus, but a big number did and reintegrating these players into the squad will be a ‘do and hope’ situation to some degree.
Anyway, the big throw-in of the season is upon us. Once the action restarts it will be relentless until three clubs are crowded as Kilkenny champions.
Beyond that there will be the Leinster and hopefully All-Ireland club championships, which threw up five titles for Kilkenny outfits last season (Ballyhale Shamrocks, Graigue-Ballycallan and Dunnamaggin in Leinster; Shamrocks and Dunnamaggin in All-Irelands).