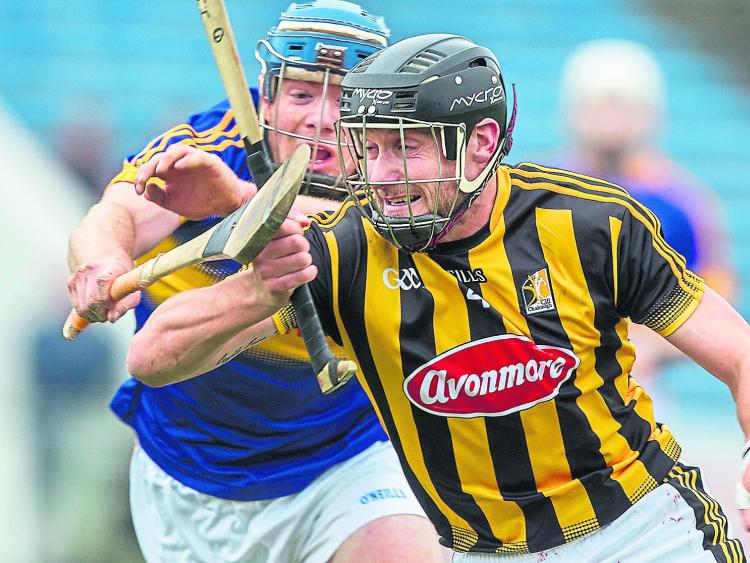 Jackie Tyrrell will be in action with James Stephens

It is a little over 14 weeks since the last games were played in the Kilkenny senior and intermediate hurling leagues.
For all the meaningful action that lies ahead, clubs know they are facing into the short end of the season.
Jump 14 weeks on from here and you would be into mid-November. That will be long past the time when most club will have kissed goodbye to season 2019.
So the next two weekends, and the weeks beyond that, are crucial.
The champions will be crowned in six games time. Those for the drop down a grade will be known in five games time - barring replays in all cases.
All the action will be crammed into an eight week period, with the county finals schedule for Sunday, October 27 (senior and intermediate).
A survey of senior clubs has revealed that no one has any real idea of where they stand, not even defending Kilkenny and All-Ireland champions, Ballyhale Shamrocks.
All are full of hope and ambition, but with training interrupted because of the inter-county action and because dozens of players spent the summer in the US, the club or clubs who can get a run going now could end up anywhere.
Every club has scored at least one win, which leaves the scope for achievement wide open.
The games
St Patrick’s v Dicksboro - The ’Boro, champions of 2017, are hoping to have former All-Star, Cillian Buckley and Bill Sheehan available after nursing injuries.
They will need to be have them against a St Pat’s side with an attack that can sting with Kevin Kelly, Michael and Joe Brennan, Jack Morrissey and Seoirse Kenny all capable of running up scores.
St Pat’s opened well against the Rower but then lost their buzz. Their defence has been weak.
Verdict - Dicksboro.
Rower-Inistioge v Erin’s Own - The teams at No. 1 and 2 in Group A. Erin’s Own appear to be enjoying a bounce after last year’s good championship run.
The Rower picked up things after a sluggish and timid opening against St Pat’s.
The Rower showed a nice edge last time out when they beat Graigue-Ballycallan. With the same ‘cutting’ they can do it.
Verdict - Rower-Inistioge.
Danesfort v Graigue-Ballycallan - Great rivals over the years, even going back to their days in the junior ranks.
Danesfort need to have former Hurler of the Year, Richie Hogan available. That is not a certainty because of a knee problem.
With additional big games coming up over the following weeks, his case might have to be managed.
Graigue are the biggest scores to date in the group with 7-35. They ran hot - v Dicksboro - and cold - v the Rower - so they need to find a happy medium.
On their day they have an attack that can destroy.
Verdict - Graigue-Ballycallan
Clara v James Stephens - What an interesting clash. The Village were awful in their opening match, but their only win was over champions, Shamrocks.
How do you marry the two of those results?
Clara beat 2018 finalists, Shamrocks and Bennettsbridge to get the season off to a flying start.
Hard to know, but if The Village play to the value of their individual parts, they can do it.
Verdict - James Stephens
Ballyhale Shamrocks v Mullinavat - Shamrocks have concerns over defender, Joey Holden (knee injury). He is a massive player for them. Even at this stage last year Shamrocks hadn’t begun to show their promise. The season changed when Michael Fennelly returned for the championship.
There is hope for Mullinavat, who will enjoy home advantage.
To turn that hope into victory they will need to stifle TJ Reid, Colin Fennelly, Adrian Mullen (an injury concern), Eoin Cody and company.
We wish them well.
Verdict - Shamrocks.
Bennettsbridge v O’Loughlin Gaels - The St John’s Park outfit are expected to be without veteran attacker, Martin Comerford, who is recovering after breaking a finger.
If the early season experiment of playing Paddy Deegan in attack is over, then they can drive on and add to their last win, a fine effort against Clara.
The ’Bridge have a way to go to find the form that shot them into last year’s county final.
Yet, around this time last season they found an effort that carried them to a great victory over Shamrocks, and so much further after that.
Results can be fortune changers at this time in a season. The ’Bridge should remember that.
Verdict - O’Loughlin Gaels.

The results to date