Rugby World Cup: it is time to deliver 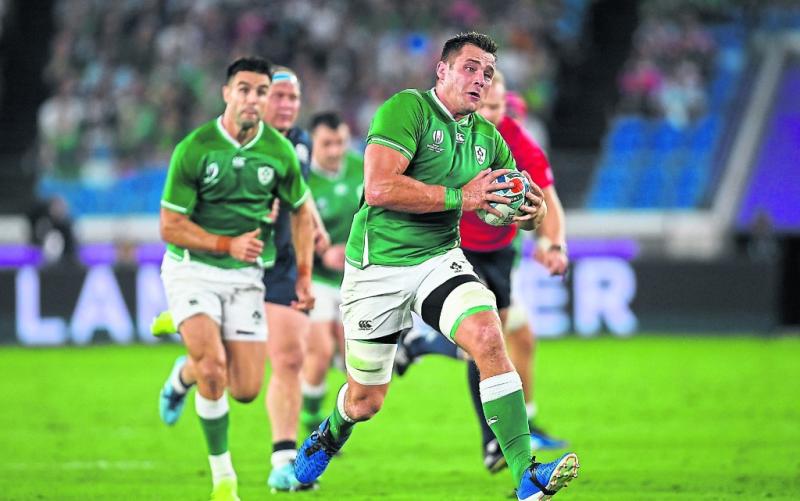 “Promising much and delivering little,” Donal Lenihan remarked midway through the second half in Yokohama last Sunday.
He was talking about Scotland at the Rugby World Cup. He might as well have been talking about Ireland at the Rugby World Cup.
All those trips to the far end of the planet. All those high hopes and good intentions. All those quarter-final exits, as inevitable as death and taxes and Japanese rain.
Is this the year Ireland finally do something more than talk a good game? Is this the year Ireland, entering the tournament under a small cloud following an underwhelming Six Nations performance topped off by last month’s hammering in Twickenham, have kept their powder dry for the supreme moment? Is this the year that Ireland at long last reach the last four or even – let’s say it aloud – the World Cup final?
We have lived through a golden era for Irish rugby. Number one in the current world rankings. Two Grand Slams, innumerable Six Nations titles and so many Triple Crowns that nobody can remember them all. Older readers, in contrast, will remember the Triple Crown triumphs of 1982 and ’85, and the outpourings of national rejoicing they triggered, only too well.
We have also lived through a golden era for hype about Irish rugby. Therein lies the challenge when it comes to forming a measured assessment of the team’s place in the greater scheme of things.
Remember: rugby is a game cultivated by Dublin 4 types, largely because they’re crap at every other sport. And: Dublin 4 and its environs are full of media and marketing folk.
Therefore: sometimes with Irish rugby it’s hard to tell the signal from the noise.
Hence the marketing baggage, clever and imaginative, that comes attached. Team of Us. This is Rugby Country.
Hence the transmogrification of the Irish Independent, formerly a solidly GAA paper as befitted the voice of middle Ireland, into the little brother of The Irish Times.
Hence Daire O’Brien’s bizarre claim on RTE that rugby “is the national game”, an assertion instantly and automatically undercut by his next-breath acknowledgement that “you see people at the Aviva who’d never go to an All-Ireland final”.
Hence the lavish coverage afforded to the Leinster Schools Senior Cup, the western world’s most preposterously overhyped sporting competition. And no, Neil Francis, being in the dressing room beforehand is not like preparing to over the top at the Somme.
Hence the readiness of so many apparently normal people to believe that the two recent, long overdue victories against the All Blacks were among the finest moments in Irish sporting history. They were challenge matches, people.
Great Sporting Moment
If Ireland beat the All Blacks in Japan over the coming weeks – in, y’know, an actual competitive scenario, and better still in the World Cup final – then that will count as a great Irish sporting moment. But not till then.
Another consequence is the relatively easy ride the men in green receive. When the Irish soccer team play badly they get slaughtered, which is fair enough.
Two years ago, however, Joe Schmidt’s side lost 27-22 in Murrayfield after trailing Scotland 21-8 at half-time. Too many outlets who should have known better waxed on afterwards about Ireland’s “brave fightback” when they should have been asking questions about that ruinous first-half display. Let’s not damage the brand, eh?
What would Willie Duggan have said? Exactly.
At least Schmidt did not figure among the ranks of the mealy mouthed. Ireland have come too far over the past 15 years to be in the business of moral victories any more and the manager was quick to say as much.
All of which leaves us with Schmidt’s team needing to – no, make that “absolutely obliged to” – progress past the quarter-final stage in Japan. Otherwise what has been the point of all the hype?
Up to last week my man in the know assured me that South Africa would be trickier opponents than New Zealand, on the basis that the latter are no longer the force they were whereas South Africa play a game much like Ireland’s but are bigger and appeared to be coming to the boil at the right time.
On the evidence of the All Blacks’ dismissal of the Springboks last Saturday I suspect he may have changed his mind. One would like to imagine Ireland possessing too much variety and imagination for South Africa in a putative quarter-final as long as they’re not overwhelmed by the opposition’s power and physique in the opening quarter.
Beating Scotland has given Ireland the luxury of taking a breather, resting some key players and waiting for others to regain full fitness. Come the quarter-final they ought to be pitch perfect.
The time to deliver is at hand. No more excuses.