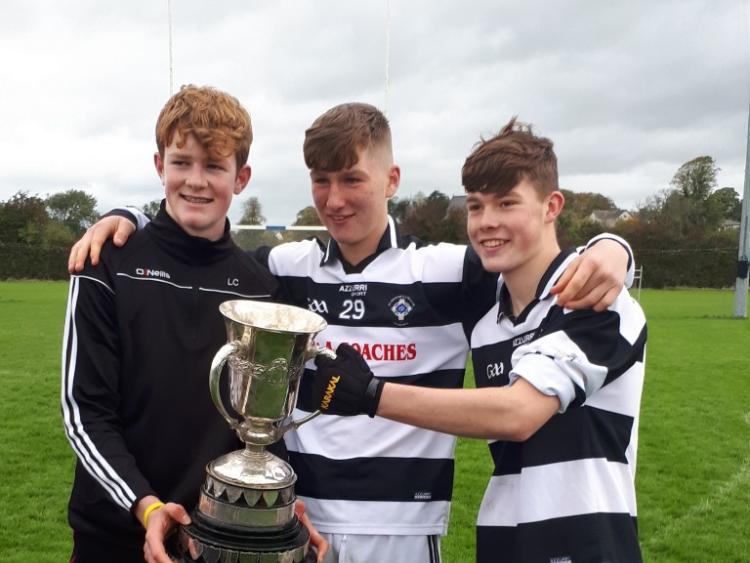 Defending champions, St Kieran’s College, Kilkenny met fire with fire during a particularly competitive opening quarter but after that they took control before roaring on to a fine victory in the Leinster post primary schools junior A hurling final in Thomastown today.

Good Counsel (New Ross), who had beaten St Kieran’s in the league a few weeks ago, gave as good as they got during the opening quarter when they faced the strong wind.

Actually, it was a contest between deadly free takers, Harry Shine (St K) and John Redmond (GC) during this period. Neither of them blinked; both recording a 100% success rate on the set plays.

The hugely talented and deadly striking Shine was the star man for the winners. The scores had been level on three occasions before Shine found the target for the fifth time in the 16th minute to regain the lead for St Kieran’s (0-7 to 0-6).

The Cats drove on smartly from there, Nick Doheny and Killian Carey adding quickly to their gains.

When Padraig Naddy charged through for the first of his two goals in the 25th minute it was a big score for St Kieran’s, who ended up leading by a commanding 1-15 to 0-8 at the break.

Good Counsel put in a stout effort afterwards, driven on by the powerful Conor Foley, who had been re-sited from centre-forward to centre-back. However, a tenacious St Kieran’s defence just refused to cough up scores.

Nine minutes from the end lively sub Paul Mulligan put the ball across the face of the Good Counsel goal, and there on the edge of the square to flick it home was Naddy. The gap jumped to 2-20 to 0-14, and that was it.

St Kieran’s College go straight through to the All-Ireland final which will be played in late November, apparently.