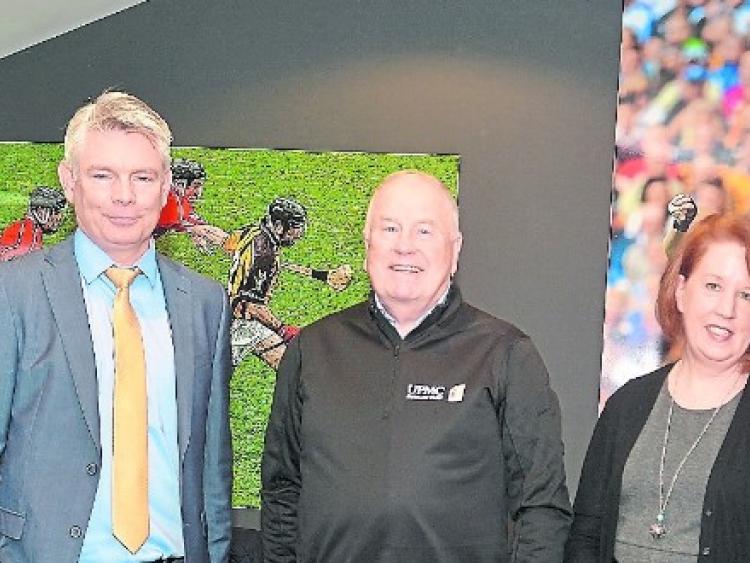 Pictured at the launch of the UPMC renaming of Nowlan Park are (from left) David Beirne (MD UPMC), Noel Skehan, Mary Worden (UPMC)

The new deal on the naming rights of Kilkenny GAA headquarters at Nowlan Park may have been big business and a groundbreaking move for the County Board, but it was all done and dusted in an hour or so.
The initials UPMC (University of Pittsburgh Medical Center) will precede the name Nowlan Park for the next 10 years at least in a deal that will be worth a “seven figure sum” to the ’Board with all add-ons included, it was revealed at the official launch of the partnership.
“If life were only so easy all the time,” quipped County Board chairman, Jimmy Walsh, when revealing the ease and speed at which the deal was done with UPMC through their Managing Director in Ireland and international senior Vice-President, David Beirne.
“We pay so much for naming rights, but this is a partnership,” explained Mr Beirne when asked about the overall figure he suggested during his address when he spoke to the ’People afterwards.
Other initiatives
“We expect to be working on other initiatives with Kilkenny GAA in the future. The whole thing is a partnership.
“You pay for naming rights as in any deal, but thereafter there is a commitment to work together in areas on player welfare, health and wellness. We will carry our weight in those areas.
“It is a commitment, a commitment to our relationship with Kilkenny GAA. It is over 10 years. It is a big commitment, a big partnership. Kilkenny GAA is a big organisation, a big brand. We are a big global healthcare company.”
It was announced recently that UPMC are now the official healthcare partners of the GAA and GPA.
The company also sponsors WIT GAA teams at all levels and codes, plus the Ashbourne Cup (camogie) for next year as well.
“We have a commitment to community, a commitment to investment in the community and to sport,” insisted Mr Beirne, who played with Dicksboro and Glenmore and represented Kilkenny at senior, minor and under-21 level during a distinguished career.
The UPMC partnership goes way beyond the naming rights of the ’Park and could involve Gaelic players benefitting from the expertise of giants of sport in America.
UPMC, an international not for profit healthcare provider and insurer, have partnerships with the Pittsburgh Steelers America football and the Pittsburgh Penguins ice hockey teams in America.
It is possible down the road that Kilkenny hurlers could benefit from expertise in the area of strength and conditioning at either or both outfits, it was suggested.
“Everything is possible,” suggested David Beirne. “With something like this, as the partnership develops, if people come with ideas we will look at them.
“Everything is on the table. It is a partnership. We are very open to working as partners,” he added.
“We didn’t sign this deal lightly. Pittsburgh approved the deal. They understand sporting partnerships like they have with the Steelers and Penguins.”
Nowlan Park was opened in 1955 and was named after James Nowlan, the longest serving President of the GAA. Mr Nowlan also served as an Alderman on Kilkenny Corporation.
The capacity of the ’Park is in excess of 27,500 with seating for over 18,000, which is the biggest in Leinster outside of Croke Park.
Mr Beirne heard the County Board was considering renaming the grounds and he put in a ’phone call to treasurer, Barry Hickey. A quick chat was followed by a quick meeting with a group representing the County Board, which was followed by the new deal.
“We sat and talked for about an hour,” Mr Beirne explained when asked about the approach. “The people around the table knew each other. I asked them what they were looking for. I went away and got it.”
Deal done! UPMC Nowlan Park entered the lexicon of the GAA and sport in Ireland.
Croke Park had no problem signing off on the deal which was finalised in September, suggesting it was “a perfect fit” for the county.
“UPMC has a history of working with leading sporting organisations to support excellence on and off the pitch,” Mr Beirne said at the time.
“Through our sponsorship of UPMC Nowlan Park we look forward to supporting the GAA and Gaelic games in Kilkenny and the South East in the years ahead, from top inter-county players to the grass roots club level.”
During the press conference, Mr Beirne, was presented with a medal he won in an inter-firms championship 22 years ago while working with Avonmore Creameries.
Apparently he had to rush away on the day of the final and Avonmore team officials never got round to getting the medal to him. An official with that team, 73-year-old Paddy Butler from Freshford, attended the press conference and presented the medal from the 1997 championship to Mr Beirne.
“That was a lovely touch,” Mr Beirne said afterwards. “I never even knew I didn’t get the medal. Imagine? I thank Mr Butler for going to the trouble of getting the medal to me.”