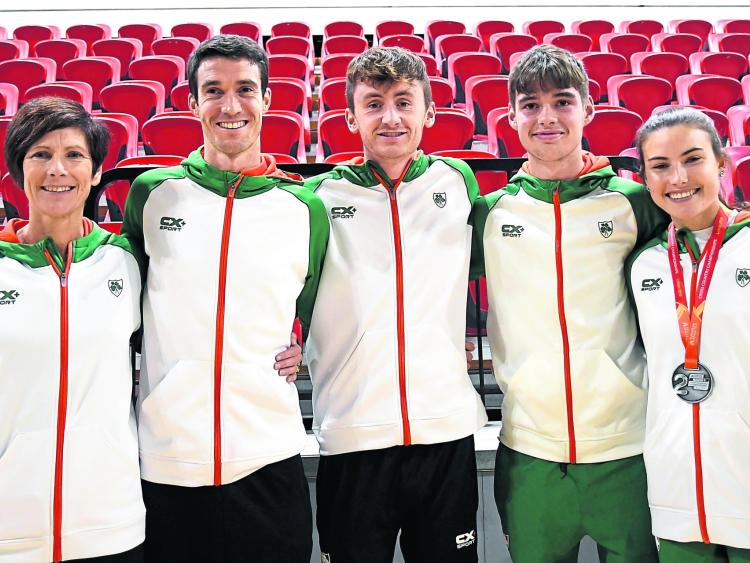 A world class welcome greeted a group of European athletes on their return to the Marble City.

The Watershed was a wall of noise as five members of the Kilkenny City Harriers club - Niamh Richardson, Eoin Everard, Aoibhe Richardson, Peter Lynch and Shay McEvoy - were hailed for their heroics at the cross-country championships in Portugal.

Despite reaching new heights on the international stage the group showed that their bond with the club is as strong as ever.

“How exciting it is to have these five people representing our club in Europe,” KCH chairman John Maye told a packed auditorium.

“It was a really special day for us.”

The quintet were given a raucous welcome as they were introduced to the crowd, with a special greeting for Aoibhe Richardson.

A silver medal winner with the Irish senior women’s team, she was given a standing ovation as she walked into the centre of the room.

Aoibhe’s mother Niamh, who coached the Irish women’s under-23 team to silver medals, hailed the four athletes for their efforts - not just in Portugal but from the beginning of their athletic careers.

“This has been one of the most incredible weeks, but it all started on a night like this,” she said. “These guys started by doing the ordinary things, with their coaches helping get them to where they are now.”

And the coach had some words of advice for the many juvenile athletes who were in the room to be presented with medals for their cross-country endeavours.

“Enjoy the people you are with and respect your coaches,” she said. “Doing these training sessions is how you get to the level these guys are at.

“Everyone talks about Kilkenny City Harriers, the legends and the club’s legacy,” she added, paying tribute to many of the club’s greats like Sinead Delahunty, Grace and Fiona Norwood and Cliodhna Manning, who were present for the ceremony.

“Keep going and you could be the next Eoin, Aoibhe, Peter or Shay.”

“This has been a proud night for the club,” the chairman added.

“We could be involved in athletics for another 40 years and we might not see five representatives in an European cross-country.

“To have all five represent us so well was incredible,” he added, “but Aoibhe winning the silver medal was the icing on the cake.

“How brilliant it is for everyone in our club to have outstanding role models like these guys,” he added, before spreading the praise to people working behind the scene.

“We have worked so hard on the club structures and are blessed with so many great coaches,” he continued, adding an invitation for more to get involved.

“You want to do athletics at any level, this is the club for you.”