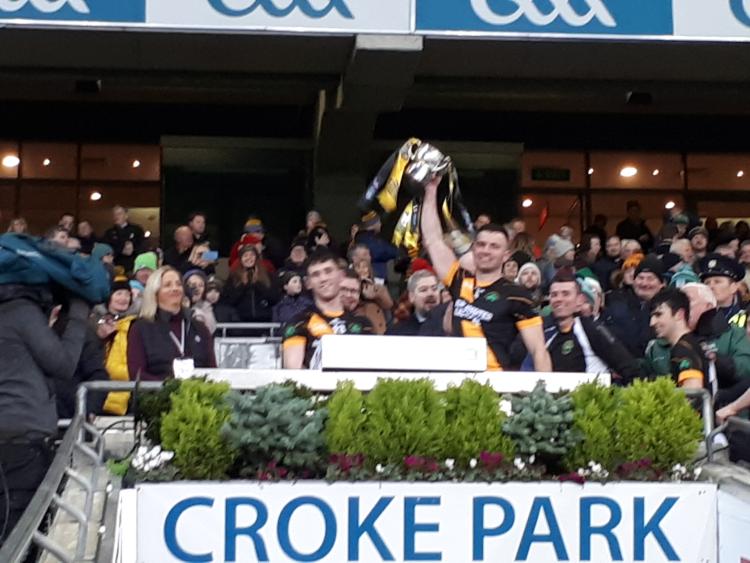 After a topsy-turvy year, Conahy Shamrocks are All-Ireland champions!

The Kilkenny club ended their season on a high when they eased past Cork’s Russell Rovers to once again secure the junior club All-Ireland honours.

Captain James Bergin led Conahy’s charge, chipping in with 0-12 as they added to their 2008 success with a dominant display in Croke Park on Saturday evening.

As the captain said, playing a Kilkenny style of fast and direct hurling led the Shamrocks to glory. Their clever use of the ball and space left Russell Rovers chasing shadows at times.

Conahy made a fine start to the game, opening up a four-point lead (0-6 to 0-2) by the 13th minute thanks to good scores from Kieran Mooney (0-2), Eoin Cahill and Bill Murphy.

Russell Rovers rallied and, with the help of full-forward Josh Beausang, clawed the gap back. Three Beausang frees in quick succession brought them to within two points of the leaders by the 21st minute, but Conahy wouldn’t be caught. Bergin fired over the next three scores, all from frees, to stretch the lead again. Although Beausang did reply with a 65, the Shamrocks were four clear at the break (0-11 to 0-7).

The Kilkenny side were quick out of the blocks in the second half, moving seven points clear thanks to Mooney (0-2) and Bergin. From there they never looked back, posting a reply every time Russell Rovers managed a score of their own in the third quarter. With Bergin taking his tally into double figures they held on for a comfortable victory.