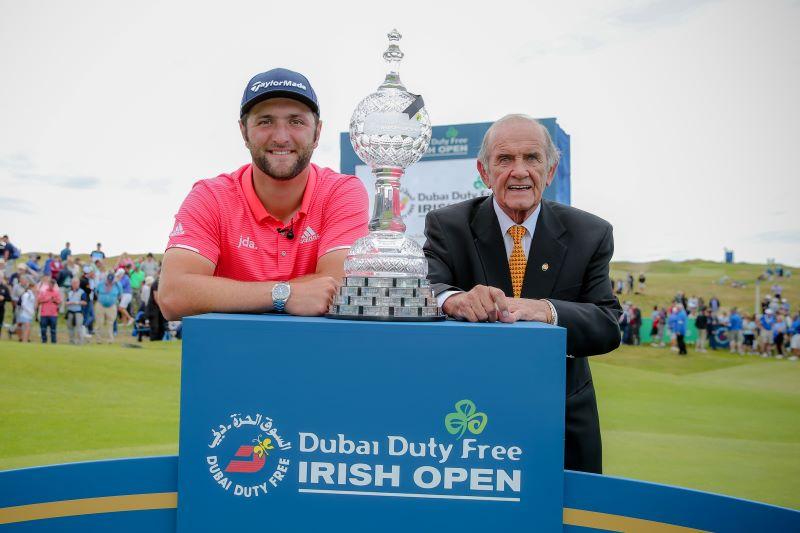 Dubai Duty Free was founded in 1983, when Galwayman Colm McLoughlin was asked to travel to Dubai and set up a world class duty free. Dubai Duty Free which was founded on 20th December 1983, with recorded first-year sales of US$20 million. It has grown into one of the biggest travel retail operators in the world with sales turnover of US$2.029 billion in 2019. It now employs around 6,100 people.

His Highness Sheikh Mohammed bin Rashid Al Maktoum, Vice President and Prime Minister of the UAE and Ruler of Dubai at the time of its opening 37 years ago wanted to promote Dubai Duty Free through supporting sporting events, and many years on we are delighted to have them as the headline sponsor of the Dubai Duty Free Irish Open this May in Mount Juliet.

Dubai Duty Free first started supporting the Men’s and Women’s Dubai Tennis Tournament 28 years ago and were the first in the world to give equal prize money to both genders. Today this tournament brings in US$1.3 billion media coverage for Dubai Duty Free.

So when I asked Executive Vice Chairman & CEO of Dubai Duty Free Colm McLoughlin why get involved in world golf tournaments, he told me “when I moved to Dubai, we played golf on sand for the Dubai Desert Classic. Dubai Duty Free became involved and in turn we were able to attract the best golfers. We became part of the Rolex Series and prize money increased from US$1 million to US$7million dollars. We are proud to say Dubai is now home to some of the top golf courses in the world.”

So the big investment, draws the big names and the big prize money. No wonder the European Tour are happy with Dubai Duty Free’s sponsorship. Colm said he is looking forward to visiting Mount Juliet again this May as he hasn’t seen the course in many years but he tells me his people have been keeping him updated and assure him the facility is top notch.

Colm, who is originally from Ballinasloe in County Galway, headed to Dubai 37 years ago on a six month contract and has stayed there ever since. He said the ‘positive attitude’ is what attracted him, “In 1984 there was three million passengers going through Dubai airport, today there is 88 million. We are the biggest in the world in terms of international traffic and the third for any type of traffic.”

Colm came to Dubai with a lot of experience; he was former General Manager of Shannon Airport Duty Free which was incidentally the first ever airport duty free in the world, founded in 1947. He now lives in Dubai with his wife Breeda and has three adult children and two grandchildren. Colm is looking forward to returning to Ireland this May and having professional golfer and long-time friend of Dubai Duty Free, Des Smith on board as the official Dubai Duty Free Irish Open Golf Ambassador.