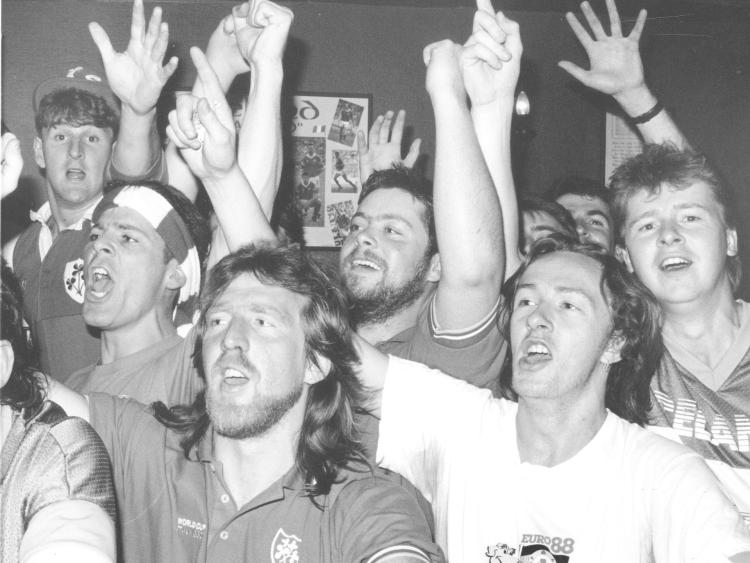 Familiar faces from Maggie Holland's during Italia 90. The Boys In Green programme looked back on these great days of Irish soccer history.PICTURE: MICHAEL BROPHY

In these unprecedented and unsettling times, there’s nothing to beat some old-fashioned feelgood television.

No surprise then that The Boys in Green, RTE’s recent two-parter about the Jack Charlton era, received such audiences (over a million viewers and counting on various platforms) and such acclaim.

To those of us who lived through the period, the programmes brought back memories of glorious days and even the occasional good goal. To others who were too young to remember or hadn’t been born, it was – presumably – all fresh and new and some kind of hard proof of what they’d long been hearing from their elders.

Some chap, clearly not old enough to know any better, even got so excited as to suggest that RTE should use the current sporting hiatus to screen Ireland’s games from Italia ’90 again. Oh dear.

Nothing could be likelier to let the light in on the grimy reality and thereby banish the magic than having to watch paint dry all over again 30 years later. Only insomniacs could welcome such a step.

Let’s recap, shall we?

Ireland v Egypt in Palermo - Possibly the worst match in the history of civilisation. Ireland were facing a mirror image of themselves and were absolutely clueless in trying to open up a resolute opposition defence.

Ireland v Holland in Palermo - Hans Van Breukelen’s error allowed Niall Quinn to equalise, after which – with both sides now guaranteed a place in the next phase – proceedings carried on at walking pace ’til the final whistle.

Ireland v Romania in Genoa - In the fuss over the penalty shootout, the preceding 120 minutes of tedium have long and conveniently been forgotten.

Ireland v Italy in Rome - The hosts went 1-0 up and that was that. Ireland could have stayed at it for another week and they still wouldn’t have scored.

Add it up. Two goals, both of them the result of opposition mistakes, in 480 minutes. Not until they were appearing in their third tournament finals of the era would Ireland score a goal they’d actually crafted themselves (John Aldridge against Mexico in Orlando).

But what of it? A nation that didn’t know any better lost its mind over nine years of almost uniformly dull and unambitious soccer. Nothing wrong with that either.

In retrospect it’s clear that Ireland hit their peak in 1992. Had they reached the Euro finals that summer instead of being squeezed out by England in the qualifiers they might well have won the competition. Really. After all, Denmark did.

Most of the footage from the series was terrific, with half-forgotten faces like the late Vere Wynne Jones popping up all over the place. Tony Cascarino and John Aldridge made for engaging interviewees, while the decision to avoid overdosing on Giles and Dunphy was a wise one.

Personally I could have done without the regurgitation of David McWilliams’s theory that Jack Charlton was the midwife of the Celtic Tiger. Yawn. I’d also have liked an exploration of the collective London-Irish experience of the era; a significant proportion of Ireland’s away support were second-generationers, the offspring of the emigrants of the 1950s.

A more analytical documentary, moreover, might have explored why Charlton’s approach never evolved, the upshot being that Ireland were doomed to labour in the heat and humidity of Orlando.

Great fun. Cheerful and cheering. Perfectly timed. What more could the viewer have asked for?

Intriguing correspondence this week from New Luffany in Mooncoin, where John Cuddihy has implored the authorities in Croke Park to acknowledge the giant contribution of Dick ‘Drug’ Walsh to the GAA.

John describes him as “the first prince of hurling”, the winner of seven All-Ireland medals with Kilkenny during the county’s initial golden era (1904-13) and captain in three of the finals. Walsh hit the winning point in 1904, captained Leinster to win the Railway Shield and in afterlife trained Laois to their one and only All-Ireland triumph in 1915.

Drug Walsh and his colleagues on what we might call the first great Kilkenny team subsequently received the freedom of the city and were even awarded £18 apiece by the civic authorities in honour of their achievements.

How different would the history of Kilkenny hurling look had it not been for Drug Walsh? Well done to John Cuddihy for keeping his memory alive.

There won’t be an Olympics this summer, the National Leagues will go unfinished, the Grand National(s) unraced and heaven knows when the Premier League will recommence. But…

Who’ll win the All-Ireland (could it be a straight knockout affair)? Can’t wait to see.

Who’ll be the first player to score for Kilkenny post-pandemic? Can’t wait to see that either.

Some day a kind of normality will resume. Absence having made the heart grow fonder, sport will be back and it’ll be more important to us than ever.