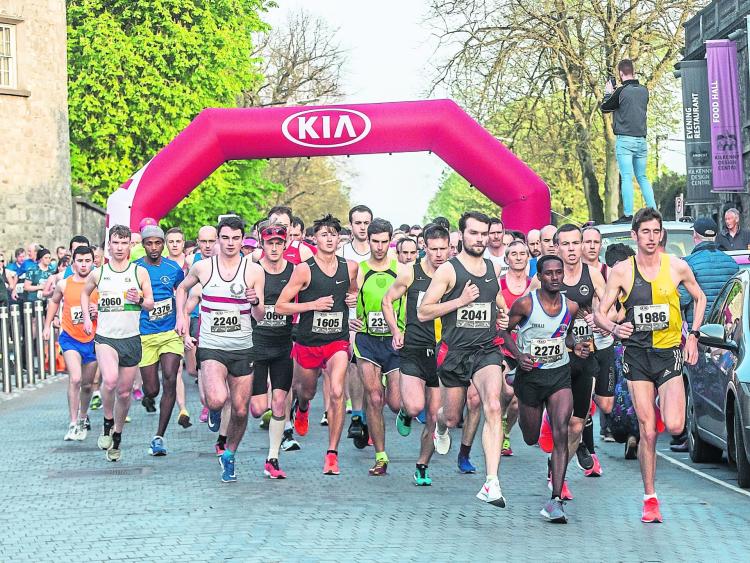 The starting line at last year's Streets of Kilkenny

The Streets of Kilkenny 5K may have suffered a false start, but the Marble City will echo to the sound of runners’ footsteps this summer.
Organisers Kilkenny City Harriers have announced a new date for their annual road race, which has quickly become a firm favourite with local and international runners alike, of Thursday, August 6.
The move came after the race, part of the Kia Road Race Series, was cancelled due to the ongoing threat of the coronavirus pandemic. The Streets was due to be run on April 9, but organisers moved quickly to postpone the race in light of recent developments in relation to Covid-19.
“Postponing the event was the only call to make,” Harriers PRO Nicholas Dunphy told the People.
“While we had hoped it would go ahead on the original date, news of the outbreak of coronavirus in Ireland meant we were always uncertain about that happening.”
Alternative date
The Streets was the second event on the Kia Race Series calendar to be postponed - the Streets of Portlaoise, scheduled for St Patrick’s Day was first - but the Harriers were quickest out of the blocks when it came to finding an alternative date.
“While race organisers have had to juggle dates we quickly decided on August 6,” said Dunphy. “We are hopeful that with all regulations and recommendations followed it will be far enough ahead to ensure the virus has gone. The date is also a Thursday, a traditional day of the week for our races.”
Whether the new date suits all the participants remains to be seen. A high number of entrants had signed up for the original run, but the Harriers are hoping all can make it to Kilkenny in August.
“Date on date the numbers had been up on last year’s figures,” said Dunphy. “We had hoped to break the 1,000 figure for participants, so we’re hoping we’ll have a great crowd come out on the night in August.”
Post-Race party
The Harriers will be working with race management company Pop Up Races to rearrange bookings but while the race will go through a number of changes one thing remains the same - the post-race party!
“Langton’s will still be the place to be after the race,” said Dunphy. “We will all be ready for one big party when all of this over.”