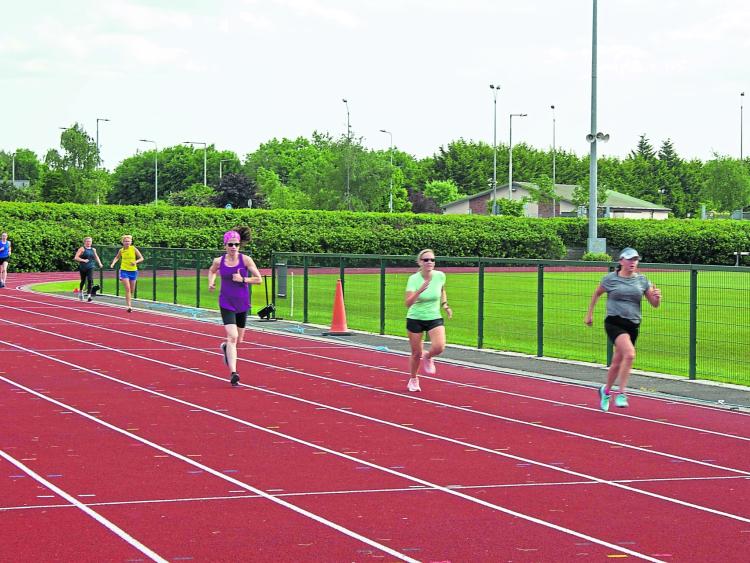 The rhythmic sound of feet clocking up the miles as they move around the running track at the Watershed shouldn’t be out of the ordinary – but this hasn’t been an ordinary year.
Usually runners are part of a very busy scene at a venue which is known for being a hive of activity. Instead the grass and artificial playing pitches, indoor gym, basketball court and swimming pool are all silent, closed as Ireland gets to grips with the coronavirus pandemic.
However, this group of athletes from the Kilkenny City Harriers may have brought the first signs of a sporting recovery to life.
After more than two months of lockdown, the senior Harriers are embracing the ‘new normal’ – training while following social distancing guidelines. They look the part as they glide around the rubber track at the Loughboy venue as part of their training.
For these runners it’s a well-worn routine, but there’s no hiding the smiles on their faces as they chat while racking up the laps as they go around and around on a glorious May evening.
The athletes are the forerunners on the roadway to recovery and may be good news messengers for other sporting organisations across Kilkenny and the country.
While sports clubs have had to ensure months of non-activity and locked gates, the Harriers have been the first out of the blocks and kickstarted their own road to recovery with organised training sessions for adult members.
“It’s great to see such a reaction to training,” said coach Pat Purcell as he puts the group through their paces. “It’s great to be back.”
Watching on as this group of Harriers, one of the first back in action in Kilkenny, break the silence at an otherwise empty Watershed, their coach explains the story behind what got the club back on track.
“We were told that we could train in groups of four, but we didn’t know the Watershed was open or what Athletics Ireland’s guidelines were on training,” he said as a happy group of runners move past on another lap.
“People on the club’s committee were working hard in the background, along with the Watershed, to come up with a protocol where we could bring three groups of four athletes out on the track. 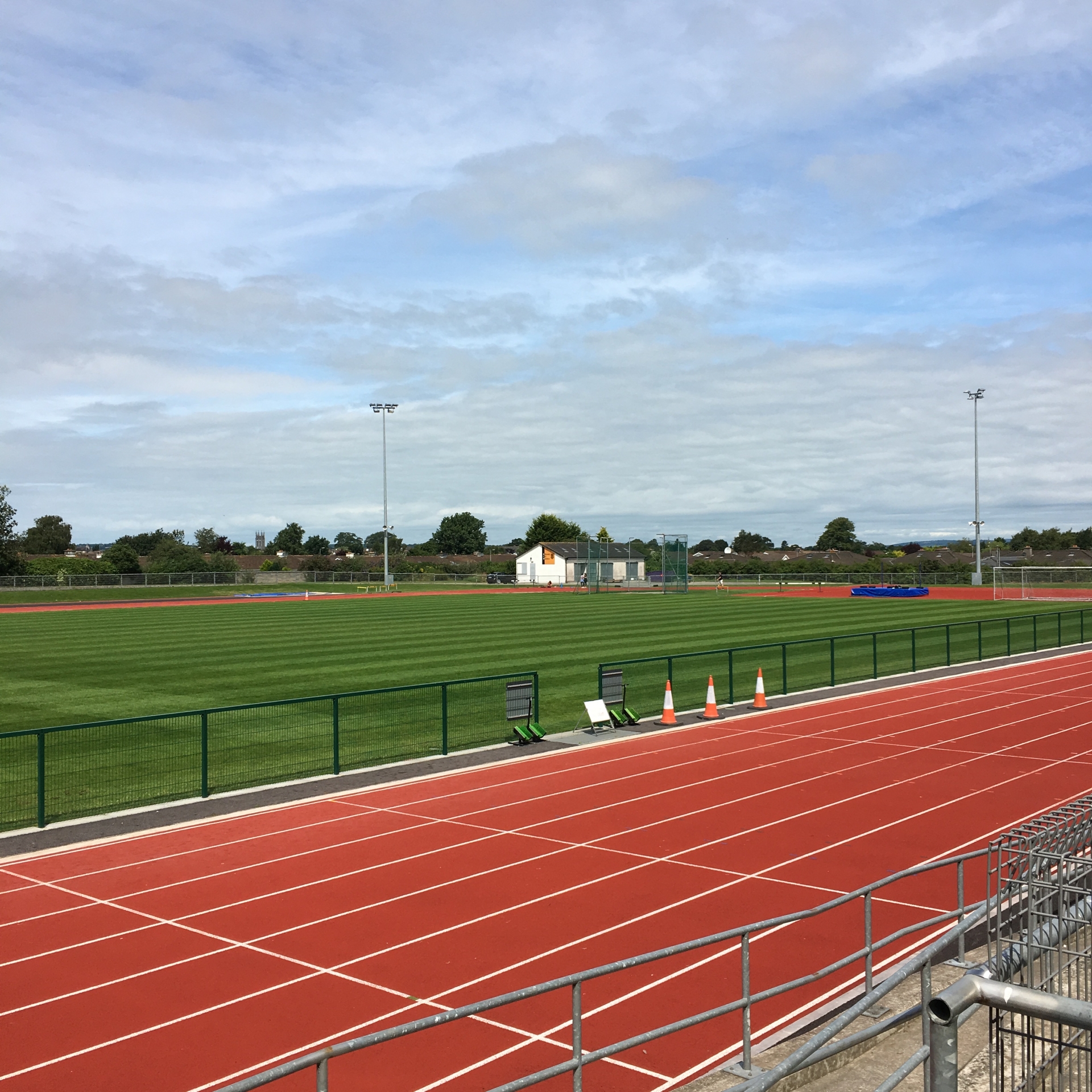 “Our group was asked if we wanted to take one of the slots,” he recalled. “I thought we’d struggle to get enough people to fill one of the hour slots, but straight away we had 18 people booked in!”
INSTANT RESPONSE
The instant response was a huge boost for the club, who jumped at the chance to get back into something of a sporting normality.
“We had to take two hours and divide them into two groups, but the following week we had more people interested to join in,” he added. “Right now we have 21 people booked in between the two slots.”
And it is hoped that number will grow as the lockdown measures are eased.
“We have other people who want to get involved but because they live further away they can’t travel in,” he said. “Once the restrictions are lifted (people will be able to travel 20km from June 8) they have indicated they will be back.”
While organised training is the main goal, an added element comes with the social aspect.
“The social side of this training is massive,” Purcell said. “People have been able to get out and meet other people in a safe setting, to get out and see each other. And to be able to get some exercise on a beautiful summer’s evening? It’s just fantastic.”
While the weather has been, by and large, good during this time of lockdown, the measures put in place to combat the pandemic has spelled the end for a number of organised athletic events up and down the country – not least Kilkenny, which has seen the cancellation of the Streets of Kilkenny, Mile Marker and JJ Reddy Run in recent weeks.
“It’s been good that we haven’t been stuck indoors looking out at the freezing cold, but it’s also been frustrating with all the events cancelled,” he said.
“Things like the Road Race Series, which had been going for so many years, while the county track and field championships were also to be held in May and June.
“You also had kids who had qualified for the national indoor track and field championships who didn’t get the chance to compete in their events. It’s been very hard on athletes of all ages.”
MAINTAIN STRUCTURES
While the Harriers would love to have everyone back in action, logistics and protocol have dictated who can return. For them, even getting one section of the club moving has been a victory.
“Getting the group in here for training, even with nothing to aim for, has been great,” he said. “There are no races to compete in. For them it’s a chance to get out of the house, get a bit of fitness and just talk to other people from the club. You can see they are loving it.”
The club have worked hard to maintain the structure put in place, with runners divided into groups with a maximum of four. In a quartet two run in lane one (the inside track) while two others take up spots in lane three, thereby keeping distance between runners. All arrive at the track ready for their session and, once they sign in, off they go. Each runner also brings their own waterbottle and, more importantly, their own bottle of hand sanitiser.
It’s odd to see them arranged in socially distant gaps on the side of the track, but taking such precautions means the Harriers can continue to keep their new method of training going.
“We make sure there is a two-metre distance between each of the athletes at all times,” he said. “If you have a faster pod overtaking a slower pod they have to move out to the outside lanes to get past to make sure everyone has space.
“There’s more to it than meets the eye,” he said. “Everyone has their hand sanitiser and must sign in for every training session. We also have their details in case contact tracing is required should anyone get sick. A lot goes on in the background to make sure this can take place as everyone adheres to all Government, Athletics Ireland, KCH and Watershed guidelines.
“You have to make sure all the boxes are ticked 100%,” he added. “It’s most important as we’re the first ones back – we’re testing the waters for everyone else.
Bigger clubs and teams will look to do something like this with their facilities – if a team had two pitches there’s no reason you couldn’t spread players out.”
The flow of conversation is broken as a pod of runners filters past, the sound of footsteps matched by a gentle conversation. Although they’re putting in the laps, there are plenty of smiles on faces.
“This is vital for headspace,” Purcell observed. “Like most people I’m sure this group were trying to get out for exercise on their own every day but it just gets tiresome. At first people were probably running the same route within the 2km guideline every day. Things got better when that was extended to 5km, but here they have a safe environment to run in.” 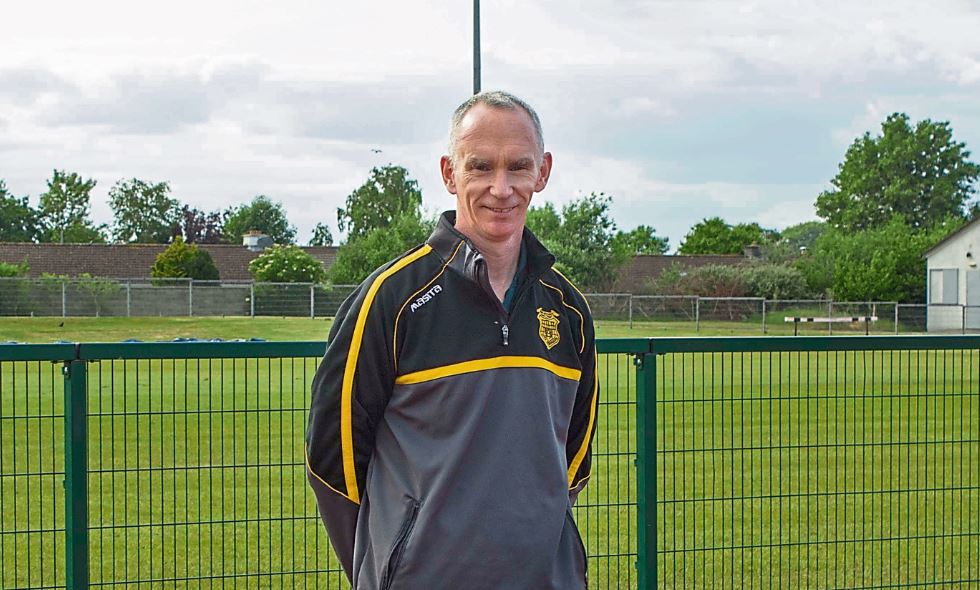 And it’s not just these athletes who are benefitting from being able to train on the track again.
“There are other groups training who would normally be involved in competitive events, kids home from university,” he said. “They have a session they can do – we have people in here Tuesdays and Thursdays at lunch-time and again in the evenings – with other national and international level athletes.
“Here they can get a dedicated session in with people of the same ability without having to worry about the crowds you might have in shared spaces like the Park or on the roads. It allows them to get the most out of themselves and each other.”
While some athletes have hit the ground running, the message for most has been to take a slow and steady approach.
“We’ve been careful not to push people because we don’t know what kind of training they’ve been doing on their own,” said Pat.
“Most people have been getting out over the past two months but you’re never sure how much they’ve done. You don’t want to push them too hard. For the first few weeks it’s all about getting out and boosting the head and the body, but don’t overdo it.”
When Government guidelines allow for an extension to the distance people can travel from their homes a third hour of training could be accommodated, but for now the Harriers are living in the moment, running in their own little oasis. On a night like this where would you rather be?
“Nowhere,” came Purcell’s reply with a smile. “There’s nowhere you’d rather be. It’s perfect.”