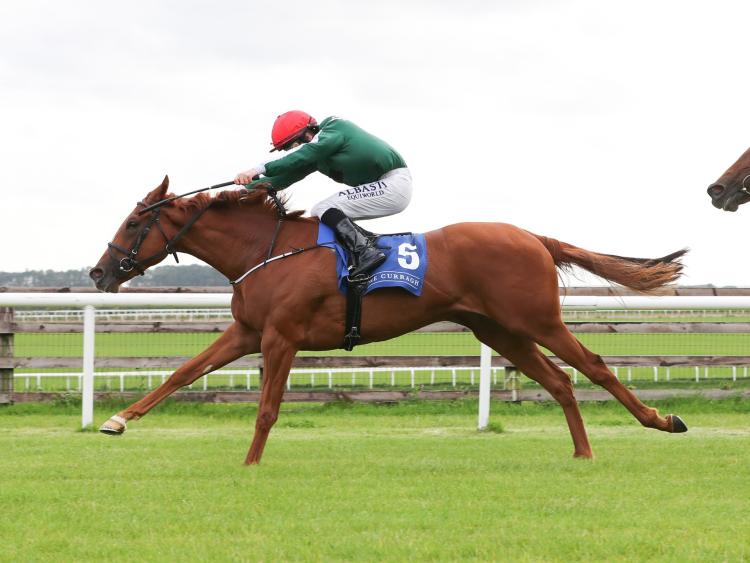 Cayenne Pepper and Kilkenny jockey Shane Foley winning The Flame Of Tara Irish EBF Stakes. Cayenne Pepper is one of eight fillies declared for the Juddmonte Irish Oaks at the Curragh

Eight fillies will line up in the Juddmonte Irish Oaks taking place at the Curragh on Saturday, following today’s declaration of runners.

Epsom Oaks runner-up Ennistymon, together with Snow, Laburnum and Passion will represent trainer Aidan O’Brien, while recent Alwasmiyah Pretty Polly Stakes runner-up Cayenne Pepper, trained by Jessica Harrington, the Joseph O’Brien-trained New York Girl and the Ger Lyons-trained pair of Yaxeni and Even So feature among the fillies who will face the starter in the 12-furlong  Classic.

There is a top-class support programme to the Group 1 Classic. Seven two-year-olds will contest the prestigious Group 2 GAIN Railway Stakes with Merchants Quay, Law Of Indices, Lucky Vega and To Glory among the contenders.

The Joseph O’Brien-trained pair of Master Of Reality and Twilight Payment feature among the six runners in the Comer Group International Curragh Cup with the Aidan O’Brien-trained Memorabilis, Camphor, trained by Jessica Harrington and the Luke Comer-trained pair of Cypress Creek and Giuseppe Garibaldi also contesting the Group 2 race.

Classic and Group 1 winner Romanised is one of seven runners and a leading fancy in the Paddy Power Minstrel Stakes, with Aidan O’Brien’s Lancaster House among the opposition as Ken Condon’s charge looks to win the Group 2 race for the second successive year.

Seventeen runners will face the starter in the Kildare Village Ladies Derby, while there are also 17 runners in the  Paddy Power Scurry including four trained in Britain, nine two-year-olds will line up in the Irish Stallion Farms Maiden and 12 contest the Sentinel Ireland Equine Products Handicap.

The Curragh also hosts an eight-race programme on day two of Juddmonte Irish Oaks Weekend on Sunday. Declarations for that meeting will be published shortly after 10am tomorrow.