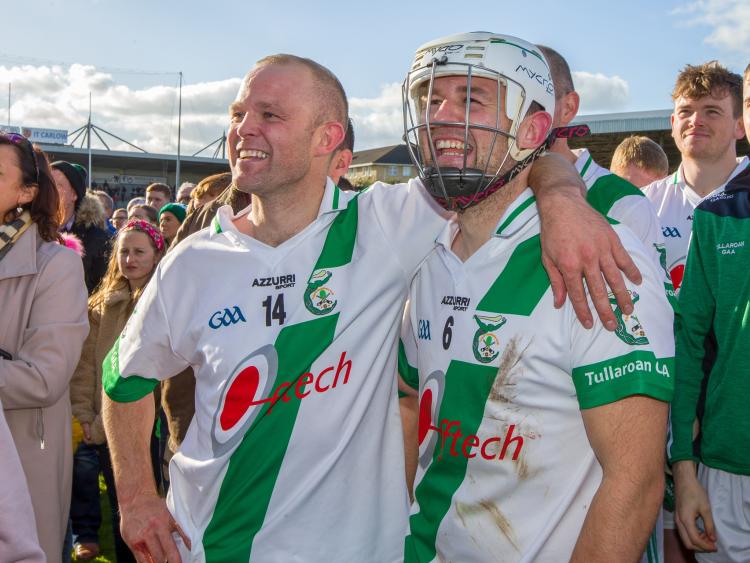 Tullaroan brothers Tommy and Padraig Walsh. Their club’s game in the opening round of the senior hurling league against Shamrocks at UPMC Nowlan Park will be broadcast live by TG4 on July 31

The introduction of a streaming service could rescue the Kilkenny GAA club season.
With championships delayed through the coronavirus pandemic, plans to play the opening round of games in front of game-hungry spectators were thrown into disarray after a maximum figure of 200 people was set for outdoor gatherings.
“We were disappointed, but we respected the decision,” said Kilkenny Co Board secretary Conor Denieffe. “We had planned that there would be a limited number of spectators at games but now that the figure has been made even lower, there’ll be even fewer people at matches. Clubs will get tickets to cover their panel, management team and medics and people working at the games but I can’t imagine there will be a lot of tickets left over.”
With low limits set for gatherings, news of a streaming service for games will come as a welcome relief for supporters.
While some details still have to been ironed out, the Co Board has struck a deal with Nemeton, producers for TG4’s match coverage, to cover a selection of local games in the coming weeks.
Although the service may not come in time for the opening round of senior and intermediate games on the Bank Holiday Weekend, locals who fail to get access to games will get the chance to see some action. The match between Shamrocks and Tullaroan, a clash of club All-Ireland champions, will be broadcast on TG4 from UPMC Nowlan Park on Friday, July 31 at 7.30pm.
The Co Board are hopeful that streaming games will help ease the disappointment many will feel when they can’t get to see games live.
“It’s going to be a disappointing time for supporters,” said Paul Fitzgerald, Co Board PRO.
“For many the light at the end of the tunnel for the past few months was the return of games and that people could attend.
“Unfortunately events have overshadowed that,” he continued. “It’s been deferred for two weeks but we’re still hopeful that, for the third round, restrictions will have lifted back to 500.”
News of the dramatic cutting of crowds from 500 to 200 came at the worst possible time for the Board, who were putting the finishing touches to their plans for the safe return to action of clubs and spectators.
“A huge amount of work, from meetings to man hours, went into getting things in place for our original plans,” said Fitzgerald. “People might find it hard to believe the scale of plans that go into place for something like this, but just as we were getting ready to roll it out, it was pulled.”
RISK ASSESSMENT
“Working on the figure of 500 spectators, a risk assessment of every ground in the county was carried out by PJ Kenny of the CCC and Seamus Reade, event control officer with the Co Board so we knew where we could host games safely,” added Mr Denieffe. “A lot of work went into that plan, but we will be able to use that information when the limit on crowds is increased again in the future.”
For now the figures are set at 200 people per venue -a figure that includes players, spectators, media and match officials. With tickets in short supply, the Board has appealed to people not to turn out without having secured the precious passes first.
“Admission will be by ticket only,” added Mr Denieffe. “There’ll be no walk-ups and we would appeal to people not to put clubs hosting games under pressure by arriving at the game looking to get in when they don’t have a ticket.”
People will also be asked to maintain social distancing guidelines, with reminders in place throughout games.
“Most of the directives were common sense, things we had already been applying,” added Mr Denieffe. “We will have cards printed that will be issued along with tickets, outlining the most important points for people attending games to follow. We will also have the use of PA systems in grounds to remind people to observe social distancing guidelines.”
Dressing-rooms will not be available for the opening games, while there will be no shops or concession outlets in operation at match venues. Physical programmes will not be available, but the Co Board are exploring the possibility of electronic delivery of programmes.
The alterations all add up to a much-changed scenario for local games, but the Co Board prefer to remain upbeat - getting games was always their goal.
“We’re focusing on the positive,” finished Mr Denieffe . “Games are going to be played.
“Numbers will be restricted initially, but hopefully that will change. We’re just delighted that clubs are back in action and that people are playing games - that’s what it’s all about.”