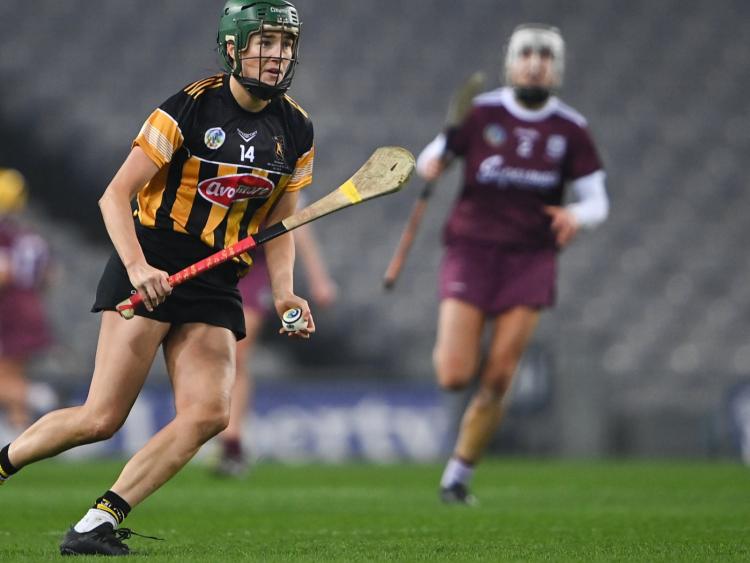 The Croke Park clock had just passed the 57 minute mark and the scoreboard showed Galway and Kilkenny locked together for the eighth time. A replay looked a big possibility - but not on Kilkenny’s watch.

After Anna Farrell and Collette Dormer combined the ball was in the right player’s hand.

Denise Gaule could have easily taken her point to edge the Cats in front but that was never in the Windgap star’s mind.

She powered towards the square before being brought down by Galway skipper Sarah Dervan.

Gaule confidently dispatched the shot to the bottom corner and while the effort looked confident in the extreme, the full-forward admitted she was still anxious as she stood over what proved to be the game-winning shot.

“I was practicing penalties but I must have hit every single one of them wide on Thursday evening,” she said.

“I’d say our goalkeeper Aoife Norris was nervous enough of me stepping up! I was nearly back at the 45 I was so afraid to step over the line and i probably had a few yards to spare on it.

“I took a penalty during the league against Clare and it was disallowed as I stepped over the line so there was a bit of hit and hope about it.

“I just tried to pick my spot,” she said. “Sometimes it doesn’t work out but thankfully it did tonight - I’m delighted.

“I don’t think the lack of a crowd makes much difference as you are focussed so everything else is just external noise really.”

The 29 year old stood out for the Cats with a finishing tally of 1-6 and it was the second half where she really came to the fore including converting a number of long distance frees.

The lack of a crowd didn’t alter things overly when it came to taking frees either with Gaule adding that she likes to blacken out any external noise if at all possible.

“I probably missed the easiest free of the lot but the younger girls like Aoife Doyle, Mary O’Connell and Katie Nolan really stepped it up to show us what they are really about and it’s just brilliant,” she said.

“You don’t really mind how you play once you win at the end of the day so I’m just delighted.”

If the lack of any spectators didn’t change much when it came to taking frees or penalties in the general play, it was very different when the game was over.

After travelling to games without a number of their panel present it was great to see the full Kilkenny squad celebrating at the end of the game but the absence of any family members really hit home for a number of players including Gaule who couldn’t wait to go home and celebrate.

“I was on Facetime to my mother and father after the match as well as my sister who are at home and they are all delighted,” she said.

“I can’t wait to go home and celebrate with them really as the support they give us all year in Kilkenny is just brilliant. It is weird that there is no supporters but we got the job done so I’m happy enough.”

Of all the Kilkenny players it was very noticeable throughout the year, and in the build up to the final, that a couple of the older stars were keen to lean on past disappointments to drive them on.

With Cork and Galway hotly fancied to upset them it worked a treat with them coming in under the radar.

“We didn’t want to go out of Croke Park with more bad memories,” Gaule admitted.

“We seemed to be written off everywhere so it’s an extra sweet victory in a way and that was the relief after the Cork match as everyone thought Kilkenny were dead and buried as we were missing a few players, but it took the girls tonight to get us over the line and it just shows the strength of the panel in Kilkenny.

“Everyone was raving about the Galway squad but our girls showed up tonight and I’m just delighted to be honest with you.”

It was a repeat of the 2019 decider in which Galway came out on top after scoring three goals but the tables were flipped a bit and despite only netting once Kilkenny created a number of scoring opportunities.

“Galway were the better team against us last year - they deserved to win, but we didn’t look at it as a revenge mission or anything like that.

“We’d know a lot of the Galway girls from trips away and get on very well so I think it really wasn’t about Galway; it was about us showing up and doing what we do and we are just happy out to come away with the win.

The big thing for us this year is that we were scoring goals. Last year we didn’t really create anything and it was their goals that really killed us.

“They say goals win matches and we were getting into the positions to score tonight which was very pleasing.”

Galway were leading at different stages of the game but they couldn’t shake off a resilient Kilkenny outfit and once they were within touch the Cats were always confident of reeling their opponents in.

“The game opened up a bit more in the second half when we ran at them and Grace Walsh got through a couple of times and it seemed more open,” said Gaule.

“I don’t know what it was but we knew if we could stick with them until half-time we might be able to pull it back.

“We knew we were on top when the ball was going inside and to be fair we probably didn’t get it in enough during that opening half but Galway are a serious side and it’s always good to come out on the good end of the result.”

While the Kilkenny attack and Gaule herself took the headlines it was the work of the defence behind her that gave the forwards the platform to cause untold trouble in the Galway ranks.

A mean defence and a potent attack makes for a deadly mix.

“The defence was unreal , I think Philly Larkin and Pat O’Neill coming in gave them a bit of a bite that they were missing in the last few years,” she said.

“You would have been walking away from training the last few weeks with belts on you whereas before you probably wouldn’t have minded marking them, so credit to the lads involved but the girls were unbelievable and the workrate out of everyone just showed how much we wanted it so it’s happy days.”