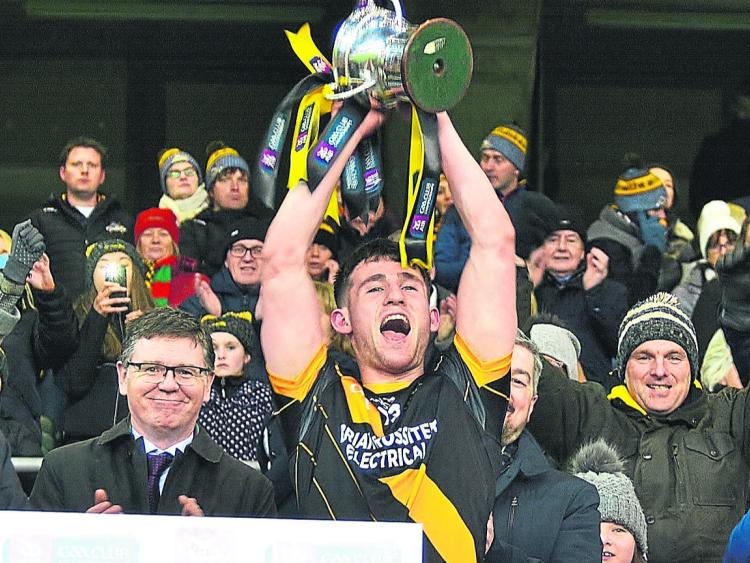 Despite only winning an All-Ireland junior hurling title at the beginning of 2020, Conahy Shamrocks main aim was to win a county championship in Kilkenny and that ambition finally came through this year.

Despite the national title, missing out on the county crown was an itch they were determined to scratch.

“These lads have shown they can perform on the big stage,” said manager Paul Buggy in the aftermath of their Croke Park victory. “Now they will have to go back and try and do it all again in Kilkenny. The junior hurling championship in Kilkenny is a melting pot.

“Junior hurling is a fantastic grade,” he added. “The fact we won this title, and we didn’t win the Kilkenny championship, shows the strength of junior hurling in the county.

“This is the end of one championship. Thankfully we have won it. There will be another championship starting in a few months time. There is a lot of hard work to be done.”

The hard work started with Conahy installed as favourites to go far in the championship, but they had strong contenders in Tullogher-Rosbercon, who had just been relegated from the intermediate grade, in the race for the title.

For the second year running they came face to face with a club’s second team in the final with Dicksboro this time standing in their way.

Despite a patchy run in to the decider Conahy weren't to be denied with goals from James Bergin and Kieran Mooney sealing an extra-time 3-14 to 0-19 success.

Dicksboro were many people’s favourites going into the game after a big victory over Piltown in the last four and for long spells of the final they looked the more likely winners.

The credit always goes to the winners and city club Dicksboro are probably still wondering how they didn’t wrap up the victory as they hit 20 wides throughout the game including 12 in the opening period and it was that carelessness in front of goal that Conahy pounced upon to reign supreme.

James Bergin and Kieran Mooney netted in the first half for Shamrocks but Dicksboro fought back and they were in the lead entering the final few minutes.

Back to back county final defeats wasn’t on the Shamrocks agenda however and a late Alan Healy point ensured the game went to extra-time.

It was in the extra period that the men from Conahy took command with James Bergin’s second goal in a tally of 2-7 pushing Shamrocks into a lead they would never relinquish as they wrapped up their third ever junior hurling championship.

The way Conahy won their Kilkenny and All-Ireland titles will mean that they venture into the intermediate grade with plenty of confidence and optimism.