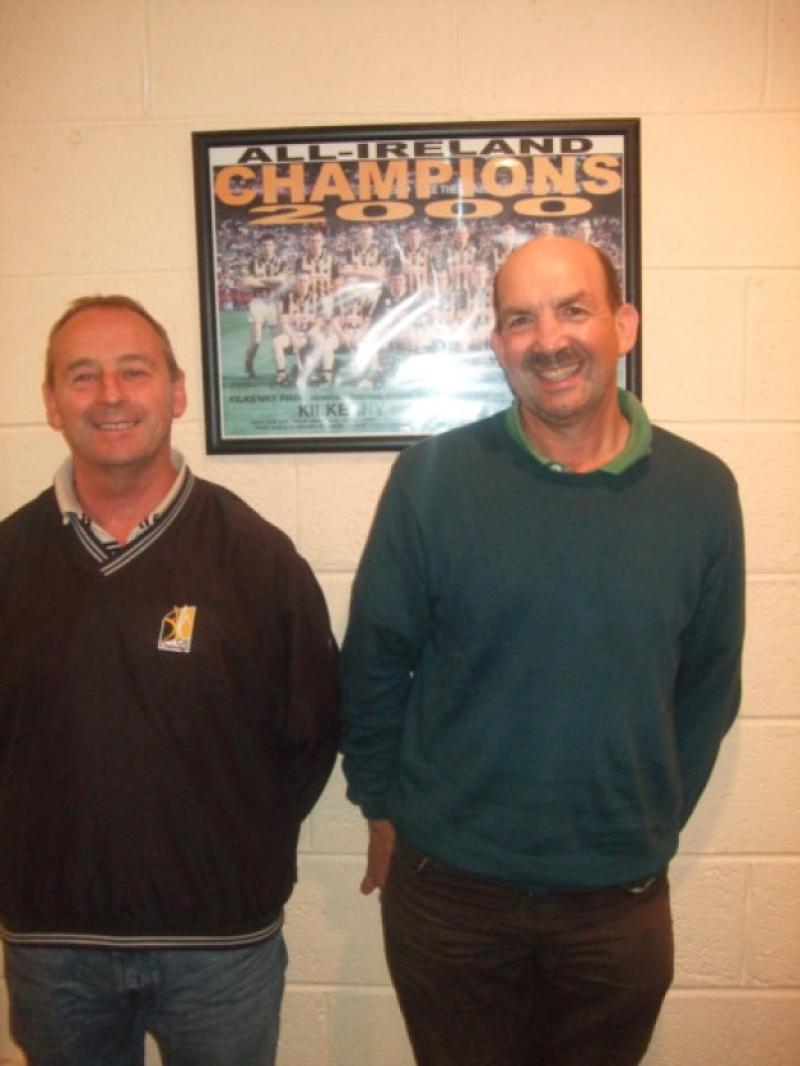 It was the same weekend as their clubs faced off in the quarter-finals of the senior hurling championship here in Kilkenny.

In fact, their final kicked off at exactly the same hour as the local hurling game, but “tough as it was to avoid the hurling encounter there was only one place that either Johnny and myself were destined to be, and unfortunately it was not in Freshford,” explained Joe, one half of the dynamic duo.

The pair have been playing together in the alley for nigh on eight years or so, and they have won plenty of golden acclaim. So Garryhill was the pinnacle as far as our heroes were concerned. Their story is worth the telling.

Aware of each other

Joe Hennessy, the multi-medalled James Stephens and Kilkenny All-Star hurler, hooked up with St Martin’s Johnny Brennan, himself a senior club and All-Ireland winner with his beloved Martin’s hurling and Muckalee (very important to make the distinction) football club.

As hurlers and footballers with their respective clubs they would have been closely aware of each other on the field in both codes. Joe, of course, was a superb defender with The Village, primarily as a half back, while Johnny Brennan oozed class as a St Martin’s half forward.

In fact, Johnny captained his club in that never-to-be-forgotten All-Ireland club final against famed Castlegar from Galway in the Centenary year of the GAA in Semple Stadium, Thurles.

When did the handball interest manifest itself?

“Everybody in Kilkenny played handball of a kind one way or another,” Joe said when he began the explanation. “If it wasn’t in an alley, it was against a gable end, the wall of a shed, even a low wall around someones garden until you would be hunted.

“We played with all sorts of handballs. I played until I was 16 years of age.

“Janey Joe, you have a great memory to remember back that far,” smiled Johnny.

It was one of those interviews that one feared might not come to any practical conclusion.

“Before I was rudely interrupted,” smiled Joe, “when I reached sixteen, I had to make a major decision. Hurling was my life. I was in line for the Kilkenny minor panel so something had to give, and the hurling won that battle.

“So I threw my lot completely behind the Village hurling club.”

So Joe, why did you come back into the game?

“I suppose it was something to do really,” he offered. “I loved being fit. Even after the senior level finished, an awful lot of us like Richie Power, Murty Kennedy, Frank Houlihan, Billy Fitzpatrick, Kevin and Ger Fennelly, and others played Masters hurling for a few years.

“I loved the cut and thrust of a sport that satisfied my demands for competitive action. I hurled well into my forties, finishing at special junior level. But I loved it. I was looking for something to do with my spare time, something to fill the void, so I thought, why not play a bit of handball?

“So that’s what I did, and I am absolutely delighted that I did. I started to tip around, and I then came into contact with Johnny.”

Did you play Masters hurling, Johnny? “No I didn’t,” he emphasised. “I had played handball at my club, Motel, on a regular basis, but like Joe, hurling was my sport. I played the handball to a degree of competitiveness, but hurling was king.”

Then, of course, St Martin’s battled for and won the Holy Grail - the All-Ireland club championship against Castlegar.

Many factors made the team

Whatever interest you had in handball around that time, I would suggest, was pushed to the back burner as a consequence of that historic win?

“It certainly was,” he said.

What made them a county championship team, we wondered?

“There were many factors really,” Johnny replied. “A country team like ours will only come once in a blue moon. We won the county junior and intermediate titles in successive years in 1974 (beat Mullinavat) and 1975 (beat Graignamanagh).

“Practically the same bunch of fellows were there when we were beaten by the Shamrocks in the senior final, after drawing the first day in 1980. We were known as Muckalee/Ballyfoyle Rangers then.

“We were then joined by Coon under the St Martin’s banner, winning the senior title for the only time in our history, beating the Shamrocks. We gained a few from that link-up which helped. Paddy Johnson (manager) had done a great job with us before 1984, and then we got Tom Neville.

“A marvellous man, he broke down psychological hang-ups, brought in expert coaching and discipline and sure the rest is history,” Johnny smiled.

Joe, they would have to be, pound for pound the strongest collection - physically - of hurlers ever put together in this county?

“As Johnny said, they practically all came together, and there were no weak links, nor weaklings on the team,” Hennessy concurred. “They had an awesome following, and when you would play a team like St Martin’s in a place like Ballyraggett, you had some job on your hands. Johnny has a medal that I, nor thousands others have not won.”

What one is that Joe?

“A Centenary All-Ireland club medal,” he declared without having to think. “Only 30 odd of them were given out in all of our lifetimes, and the sturdy proud men from St Martin’s are the only men in God’s creation with them for hurling.”

The fact Joe has two such medals didn’t appear to be a factor.

“I know, but there is none of them a Centenary one. That’s the big difference,” he said solemnly.

“As a consequence, it was unusual that the county team did not have a member of the county champions on the panel. It’s all water under the bridge now,” said Johnny.

So when did this handball partnership start?

The partnership started some seven years ago, and it really was a marriage between two supreme, focussed handballers.

“I was looking for a partner,” Johnny recalloed, “because the lads that I had been playing with were a few years younger than I, and as I had just passed the 50 mark, I was forced to look for a lad about my own age or so. Well at least 50 or over.”

“He was looking for an ould lad really,” laughed Joe, “and he approached me, the only ould lad he could find around the place.”

So Johnny, why did you pick a Village lad?

“No,” said Johnny, as quick as a pick-pocket, “ in handball he is a member of O’Loughlin’s.”

“No Johnny, yer wrong there. I am a member of Talbot’s Inch,” Joe fired back.

I felt privy to something akin to a marital breakdown.

“Jay, I wouldn’t have played with a Village man anyway,” smirked Johnny. The interview broke up in laughter and mayhem.