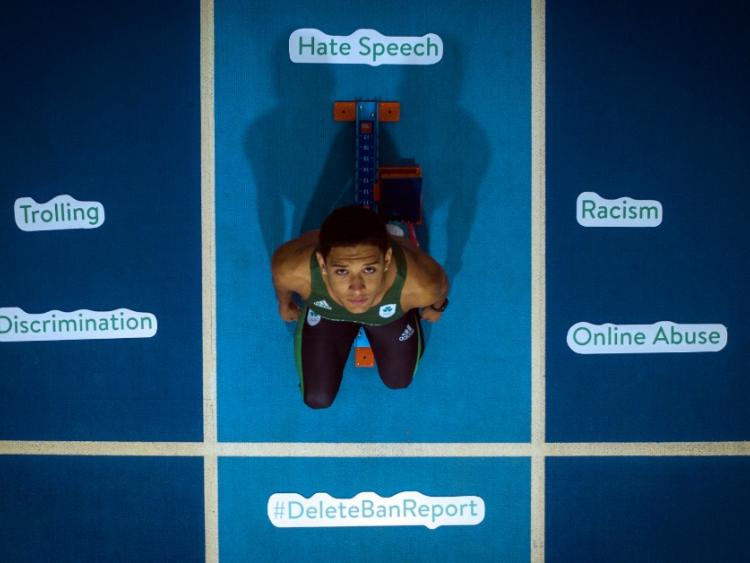 Team Ireland athletes have collectively taken a stand against online hate speech this week as the Olympic Federation of Ireland launched their new campaign ‘Don’t Scroll By’.

The campaign is an initiative of the Olympic Federation of Ireland’s Athletes’ Commission and has been launched with the support of Indeed, an official partner of the Irish Olympic team. It calls on the public and sporting stakeholders nationwide to adopt a zero-tolerance approach to online abuse, discrimination and hate speech, and to #DeleteBanReport any of this type of commentary they witness online.

‘Don’t Scroll By’ is a clear and strong statement by Team Ireland that there is no place for online abuse, discriminatory comments or hate speech on social media channels in Irish sport. They are calling on the Irish public and sporting stakeholders nationwide to join together as one to actively oppose hate speech and online abuse, and to react purposefully whenever they see it.

The OFI is asking everyone involved at all touchpoints of Irish sport to take action and make a public stance by showing that as a nation, we are anti-racism, anti-discrimination and anti-hate speech.

Speaking following the launch, Chair of the Olympic Federation of Ireland’s Athletes’ Commission, Shane O’Connor stated: “We are extremely proud to launch ‘Don’t Scroll By’ today. Irish Olympic athletes have already overcome many hurdles and challenges to reach the top of their sport. As role models, they are in the public eye, and their performances are under scrutiny.

"However, they should never be targeted based on their identity or cultural background. Team Ireland athletes want to make a very strong statement that there is no place for online abuse, discriminatory comments or hate speech on social media channels. We know that the majority of Ireland does not agree with the small minority, and we are calling on that majority to stand up and play a role in tackling online hate. Together, we can tackle it.”

The campaign was launched this morning with a new video, in which Team Ireland uses the Olympic Values of Striving for Excellence and Respect to highlight the power that people collectively have to eliminate hate speech from social media channels, to make online sport a hate free zone. You can view the launch video below:

At #TeamIreland we are calling for zero tolerance to online hate speech.

Don't Scroll By when you say hate online. Call it out and #deletebanreport it.

Our strength comes from togetherness, make sport online a safe place for everyone. pic.twitter.com/ODRg76reem

As part of the new initiative, the OFI will also officially become members of the Irish Network Against Racism (INAR) and will support their ‘Love Not Hate’ campaign and their lobby to government for the introduction of appropriate Hate Crime Legislation. They have also launched a new booklet with the support of Indeed, to support sport Social Media managers to #DeleteBanReport any type of hate commentary they witness online.

Speaking at the launch, Irish sprinter Leon Reid said: “‘Don’t Scroll By’ is a key message for all Irish athletes. I use social media a lot but there is a very dark side to it. Social media gives everyone a platform to be whoever they want to be, but you can make a fake account in 30 seconds and can make all these negative comments and hide behind a screen. We all hope that everyone will get behind us to support us for this campaign and help us to take action and control.”

Minister for Tourism, Culture, Arts, Gaeltacht, Sport and Media, Catherine Martin TD stated: “The ‘Don’t Scroll By’ campaign that has been launched today by the Olympic Federation of Ireland is an extremely important initiative for all of us involved in Irish sport and across the wider Irish society. As a society, we must come together to adopt a zero-tolerance approach to online abuse and hate speech and ensure that this type of language and commentary is eradicated and dealt with.

Government Chief Whip & Minister of State for Sport, the Gaeltacht & Defence, Jack Chambers TD, said: “This new campaign from the Olympic Federation of Ireland is a really important campaign for all of us in Irish sport and across Irish society. ‘Don’t Scroll By’ highlights how important it is for all of us to support each other, regardless of background or culture. We are proud to join the OFI today in supporting a zero-tolerance approach to online abuse, discrimination and hate speech, and to call on everyone to #DeleteBanReport any of this type of commentary they witness online.”