People Sporting Memories: This week we look back at the Towns Cup win in 2002, when Kilkenny beat neighbours Carlow to retain the title

Kilkenny 33, Carlow 13
It was a day to remember for Kilkenny rugby as the First XV proudly retained their Towns Cup title with a powerful win over neighbours Carlow.
The game was only two minutes old when, from Kilkenny’s first attack, they scored a try. Carlow outhalf Hayden Pitcher was blocked down and Kilkenny stormed forward.
The ball was picked up by fullback Denis Brennan and he look it close to the Carlow line. A lineout followed with Lee Selmon winning possession and passing to Scott Norton. A ruck was formed and from it Pat Holden made the break. He passed to Dave McMahon and the outhalf was in for the try. It was just the start Kilkenny needed.
McMahon was off target in the 14th minute before try number two came Kilkenny’s way. A kick ahead by Carlow fullback Barry Dillon was once again caught by Denis Brennan, who sent centre Ian Dowling away on a scorching run along the left touchline.
Dowling was inside the 22 metre line before Carlow could get a hand on him to halt his progress but he passed to Frederick De Villiers as he fell to earth and the ball was kept alive. The big South African passed to Pat Holden and the 6’5” mighty motivator sized up the two centres in his way.

With a burst of speed befitting a champion sprinter, Holden sailed across the line for a try which Dave McMahon converted.
Kilkenny did have a penalty chance after some good work by Scott Norton and Niall O’Gorman but the kick sailed the wrong side of the posts.
A kick by McMahon was more successful in the 31st minute and Kilkenny were 15-0 ahead. Pitcher made it 15-3 in the 35th minute from a penalty after Lennie Peavoy had been brought down by a high tackle. But Kilkenny would finish the half on a high note.

There was a lightning start from Kilkenny who, within two minutes, had scored their first try of the Towns Cup final

With time just up Kilkenny won a scrum inside the Carlow 22 metre line. No 8 Willie O’Mahony picked and drew in the cover before releasing Scott Norton to run in for the try. Half-time and Kilkenny were in front, 20-3.
They were rocked somewhat in the second minute of the second half when, after some good work by Carlow backs and forwards, second row John Roche got in for a try which Hayden Pitcher converted.
There was to be no reprieve however as McMahon made it 23-10 with a penalty in the fourth minute. The Carlow outhalf made it 23-13 with a penalty in the 56th minute, but it was to be their last score. In the 70th minute Carlow were awarded a penalty in front of their own posts but the decision was reversed for retaliation and McMahon had no difficulty with the kick.
Now leading 26-13, Kilkenny were strolling to victory - but they were not finished scoring. With full time approaching Kilkenny were awarded a scrum 20 metres from the Carlow line.
Captain and No 8 Willie O’Mahony picked swiftly and, as the Carlow defence waited for him to pass, he confidently ran behind the posts for a try.
With McMahon converting it was 33-13, with just injury-time to play out. It was fitting that Kilkenny’s most influential player should finish off the game in such style. O’Mahony was a captain who led and played by example.
The Man of the Match award went to scrum half Scott Norton, but it was a close call with so many players playing well.
Norton completely outshone his opposite number, Lennie Peavoy, Carlow’s most influential player. Once again, the back row of O’Gorman and Duggan stood out while Pat Holden was just sheer mighty in the lineouts and rucks and mauls.
Lee Selmon also had his moments while in the front row Jason Delaney and Tenari Fagalima stood firm.
Hooker Ivor O’Brien gave Pat Holden good ball to work with, wingers Stuart and George Williams kept busy, while centres De Villiers and Dowling kept the Carlow centres busy.
Simon Manuel came on at half-time for the injured Denis Brennan and played solidly.
It was a great win to end a great campaign. The Towns Cup was back in Kilkenny for another year.
Kilkenny - Denis Brennan, George Williams, Frederick De Villiers, Ian Dowling, Stuart Williams, Scott Norton, Dave McMahon, Tenari Fagalima, Ivor O’Brien, Jason Delaney, Pat Holden, Lee Selmon, Niall O’Gorman, Willie Duggan, Willie O’Mahony, Sean Byrne, Brendan Corbett, Niall Tyrrell, Paul Hanrahan, Simon Manuel, Gavin Knaggs.
Backroom Team - Coach: Ger McDonald. Manager: Ray Mannion. Technical Director: Willie Duggan. Medics: Teresa McGinn, Shirley Johnston. Doctor: Paddy McEneaney. Kit man: Benjy Lawlor. Advisor: Jim Langton.
Brilliant Cats win the battle of the neighbours
The build-up to the Greencore Provincial Towns Cup final between great rivals Kilkenny and Carlow was unforeseen in recent times.
Defending champions Kilkenny, against Carlow who had found great success in this competition over the years and had reached AIL Division One status last season. 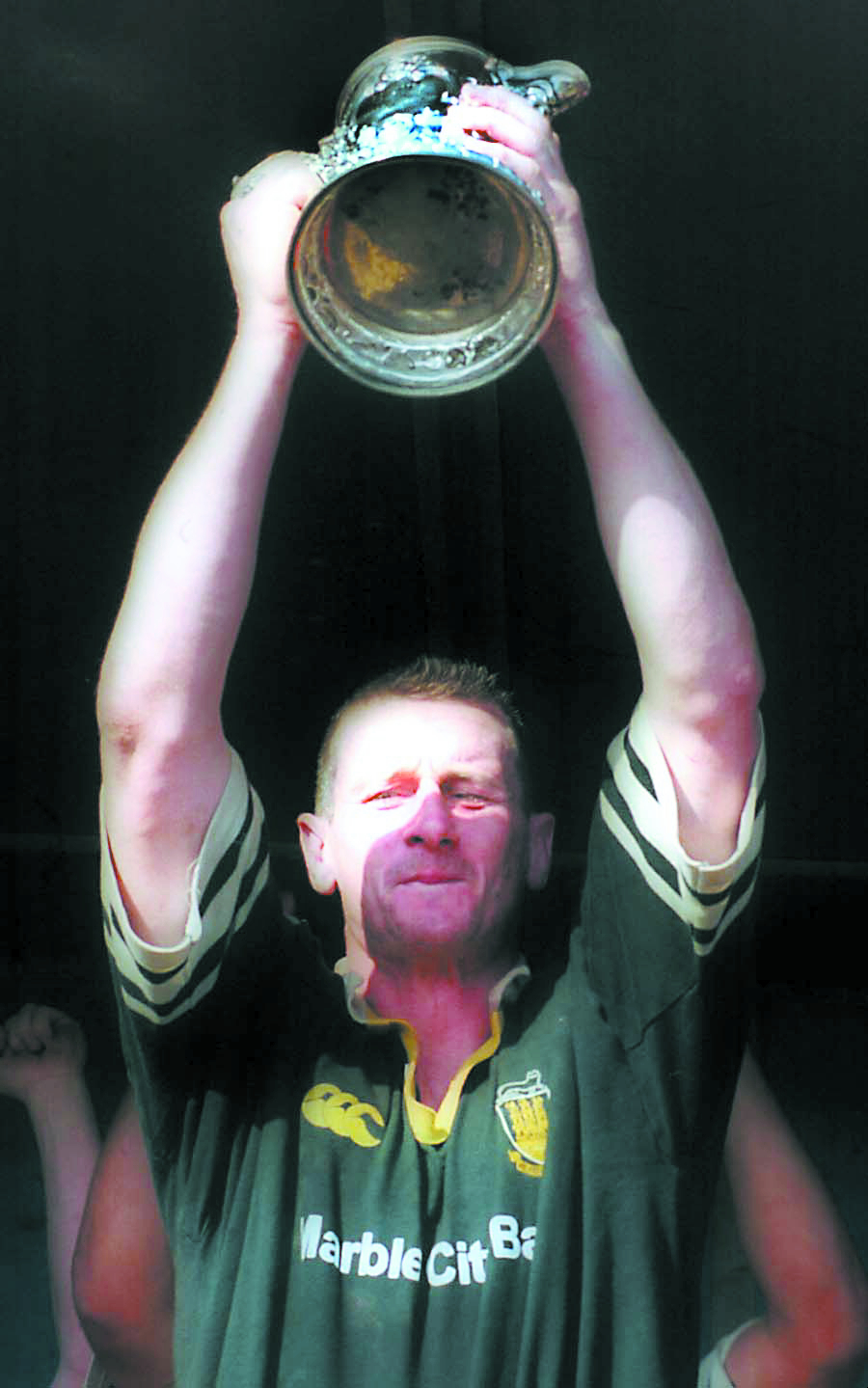 Were Kilkenny to be the fall guys against Carlow who had a number of former senior players in their side?
Kilkenny had kept faith in the panel which almost got them to the AIL and had given them great success in recent years.
The question of whether the Foulkstown-based outfit had the strength and character to overcome a side which had a strong sprinkling of AIL players would have to be answered.
It could, in one sense, be hailed as minnows against the giants with the result expected to go to the latter.
When referee Tony Redmond got the game underway we expected both sides to test each other’s skills in the opening stages.
What we got instead was a lightning start from Kilkenny. Within two minutes they had scored a try. Before half-time Kilkenny had scored two more tries and a penalty with Carlow’s sole reply being a penalty in the 35th minute. Half-time and Kilkenny had raced into a 20-3 lead.
In the league play-offs against Queen’s University the same approach had brought about almost similar results. That game, however, saw Kilkenny flitter away a good lead and a disastrous second half display.
This time, however, Kilkenny had learned from their expensive lesson and they showed the true character we had all come to expect.
They set about retaining the Cup in true tradition.
The Cup was on its way back to the Marble City, held high by the mighty No 8 and captain, Willie O’Mahony.
It was O’Mahony’s third Towns Cup medal, the first coming way back in 1986.
It was a fitting tribute to a player who has served the club so well over the years.
Successful
The club would have the most successful season in their history in 2002.
While they retained the Towns Cup the all-conquering First XV also won the South East League and the Leinster League for the first time.
Winning the Leinster League gave Kilkenny the chance to play-off for promotion to the AIL. Kilkenny beat Highfield and Westport in the play offs but lost narrowly to Queens University Belfast to lose out on promotion.
The Second XV also captured the Leinster League in 2002 to round off a fantastic year for the club.
TOWNS CUP CAPTAINS
1955 - Ned Mitchell
1959 - Jack Notley (capped for Ireland)
1986 - Mick McGrath
2001 - Simon Manuel
2002 - Willie O’Mahony