This week’s sporting lookback goes back to May 1990, when the Cats travelled to the Big Apple for the National Hurling League final 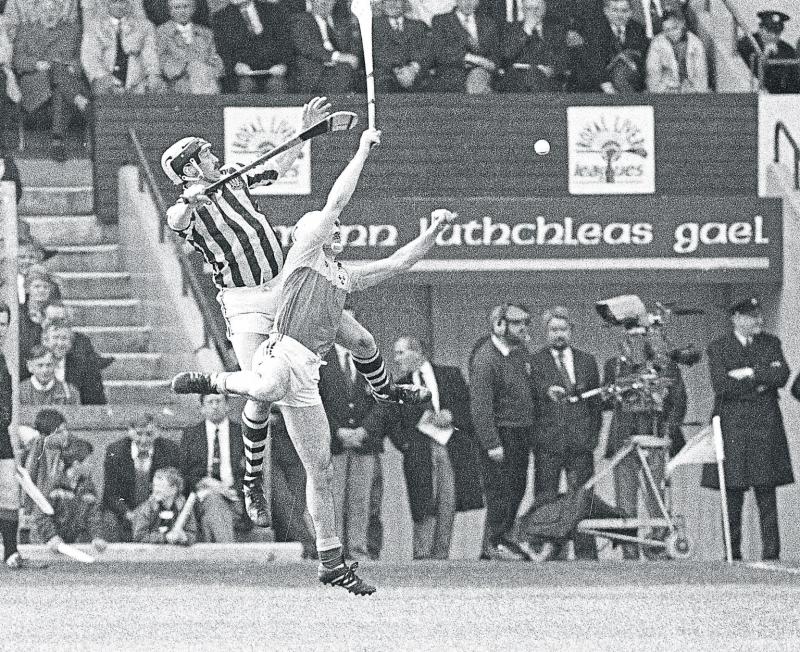 Michael Cleere (Kilkenny) in action against Martin Storey (Wexford) during the Royal Liver Assurance National Hurling League Final in Croke Park which earned the Cats a trip to New York.

It simply wasn’t the same!

Kilkenny had every reason to celebrate another famous victory, but the excitement was confined to a few players throwing their hands in the air to mark the achievement.

It was a very sober occasion when Kilkenny subdued robust New York to win the National Hurling League final proper at sweltering Gaelic Park on Sunday, and the excitement engendered by adoring fans mobbing the players simply wasn’t there.

And far from what folks back home might want to believe, this final was no soft touch, or the trip in general a ’junket’ for the players.

New York really believed they could win. They trained hard. Their preparations went well. They got it together on the day, and the closing scoreline did scant justice to their dogged efforts.

Kilkenny knew the score, and the players looked after themselves before the game. They reckoned all along they had the class to complete the job and take their eighth League title, but there were other factors that could have destroyed the quest for glory.

There was all the travelling, and trying to adjust to the hustle-and-bustle of life in New York. But above everything else, there was the Gaelic Park pitch, that quite honestly, is not fit to host an important hurling game of this nature.

The New York pitch is over-used and as a result, the playing surface is dreadful. The grassy wings lend themselves to performing skills of the game like lifting the ball at full speed, things which are impossible in a large body of the field right up the middle.

The pitch is also short and narrow - something like 150 yards by 90 yards - and too often this leads to crowding around the midfield/half back sectors.

The ball bounces awkwardly most of the time, and players were constantly checking their stride and slowing down when going to take possession and this gave opponents time to get in crushing tackles.

Football finals may have a future at Gaelic Park, but unless the pitch can be upgraded, the GAA authorities will have to seriously consider further hurling fixtures there.

There will be those who will argue that the pitch is as good for one team as the other, but that is a hollow argument in relation to an important match like the League final.

On a better pitch this could have been a really good game. New York would even have benefitted. As it was, it was close, tense and tough, the latter because of the crowded nature of things more than any malicious intent by either side.

The losers game plan was strictly man-to-man marking. It was amusing on one occasion to see Christy Heffernan back on the Kilkenny 40 looking for a break from the close-marking Tom Canty, but he didn’t get it. Everywhere the Glenmore giant went, so too did Canty. That was the plan.

New York kept pace with their opponents during the opening 26 minutes when 14 points were shared equally. They were 0-7 to 0-10 down at the break, and they were still posing a serious threat when centre-back John Fleming (Wexford) was dismissed in the 53rd minute for pulling across John McDonald. Fleming had been booked earlier. The score then was 0-14 to 0-9.

After that Kilkenny opened the game up much better, and during the closing five minutes they flashed over points by the very effective Liam McCarthy (2), one a great score after winning a clearance from ’keeper Kevin Fennelly and rounding two men, and the daring DJ Carey (2) to finish more handsome winners than they really deserved.

With a bit of luck, New York could have had a goal during the first half, which would really have put the pressure on their opponents.

In the near 70 degree temperature (21 Celsius) it was tough going for the players. Kilkenny employed safety first tactics, and no one delayed on the ball.

Eamon Morrissey, who arrived in New York less than 24 hours before the start of the match, and Roy Sampson swapped points in the opening minute, and the trend was set for a close opening half. Six times afterwards like scores were landed, and twice, in the fourth (0-2 to 0-1) and 15th (0-5 to 0-4) minutes, the losers showed in front.

In the fifth minute Christy Heffernan had a Kilkenny goal disallowed when he fielded a free from Carey, but he forgot himself and palmed into the net. In the 16th minute Ian Conroy had a great chance of a goal for New York when the winners defence was split wide open, but his reactions were a split second too slow.

It wasn’t until the closing minutes of the half that Kilkenny opened up and then quick scores from Carey (2) and John McDonald gave them an interval lead of 0-10 to 0-7.

Kilkenny’s Harry Ryan, looking as fit and well as he has for years, cut the difference to a pair of points within minutes of the restart. Again in the 40th minute the deficit was the same.

But all the time the Kilkenny pressure was getting more intense. Liam McCarthy once got the ball within an inch of the line. Then Eamonn Morrissey sent a rocket across the face of the goal and wide. And at the end of the third quarter the dependable Jim Lyons saved on the line from McDonald.

With Michael Phelan battling well at centreforward, and Carey at last getting space on the wing, the Noresiders began to get the upperhand when they moved 0-14 to 0-9 clear.

Then came the sending-off and the 3,500 crowd let the referee know in no uncertain terms that he wasn’t a friend of theirs. It was all over after that, and Kilkenny’s superior numbers and fitness made all the difference.

Taking all factors into account, this was a huge test of character and resolve for Kilkenny. They passed with honours, but there was still the feeling that the ‘real’ League Final had been against Wexford.

DJ Carey delighted with a showing of courage and unshakeable confidence. He missed a free or two, but it didn’t bother him.

Pat Dwyer was powerful at centreback during the opening half, and his point from an 80 yards free was one of the best of the hour. Bill Hennessy was utterly dependable, as was Kevin Fennelly, John Power, Michael Phelan and reserve, Liam McCarthy were also very, very good.

New York had a hungry outfit, and in ’keeper Jimmy Duggan, Jim Lyons, John Fleming and Sean O’Donoghue, who took a lot of ball from midfield in the opening half, they had classy performers. Kilkenny’s own Harry Ryan, created a buzz every time he gained possession, and he took careful watching. 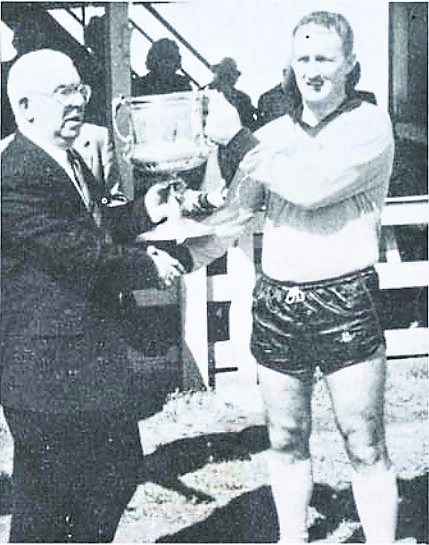 Kilkennyman Harry Ryan may have done all in his power to bring his native county down in the National League final, but when the hurling battle was over he was the first to congratulate his old comrades.

Fifteen months ago Harry, his wife Mary and their two children moved to live in New York, and they are doing very well.

But no matter what, the heart of the former Clara player is still with Kilkenny.7

“I thought this new Kilkenny team looked very well,” he enthused. “The team is certainly coming along. It looks as if it could win the All-Ireland championship, maybe even this year.”

Harry said he wouldn’t mind being on the current Noreside team, and laughed that he mightn’t get his place.

“I was very impressed,” he went on. “Young players like Eamon Morrissey, DJ Carey, Bill Hennessy, John McDonald and Pat Dwyer all seem to have slotted in nicely. They definitely have a lot going for them.”

Harry revealed that New York were full sure they were going to win the final. After being beaten they were very disappointed.
“We were sure we were going to win,” he revealed. “We knew we had the advantage of the pitch, and Kilkenny would be tired after travelling. We felt these factors would help swing it for us.”

He said New York had trained for six weeks before the match, but it was a definite disadvantage that they had only one competitive game before going into action.