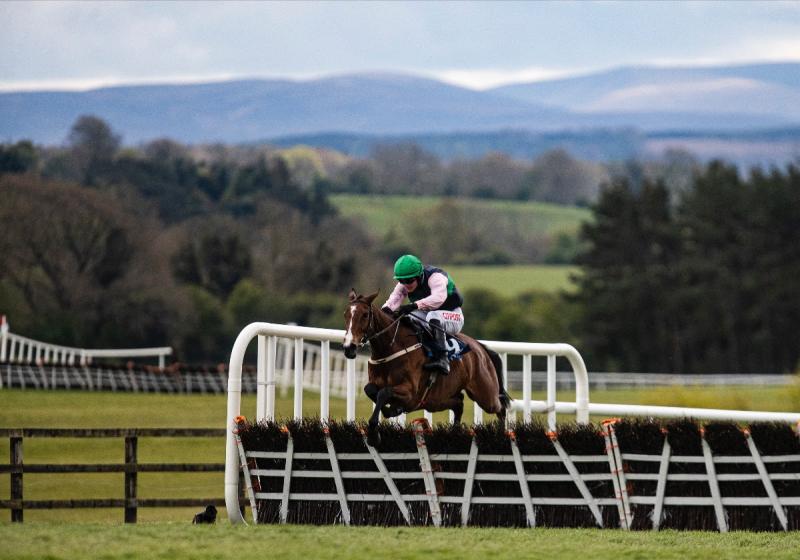 On a day when he was crowned champion trainer for the 15th time, Willie Mullins recorded a final Grade 1 success of the season with his ninth of the Punchestown Festival as Stormy Ireland made all the running to win the €120,000 Coolmore Kew Gardens Irish EBF Mares Champion Hurdle.

Backing up her Easter success at Fairyhouse, Stormy Ireland was arguably posting a career best here at Punchestown as she claimed the richest ever hurdle race run for mares in Ireland the the UK.

Carrying the colours of the FB Racing Club, Stormy Ireland was a 17th winner of the 2021 Punchestown Festival for the trainer, who was remarkably reached that feat by training winners for 15 different owners over the five days. He would later go on to make that a record-breaking 19 winners.

Stormy Ireland's victory was another big race success for Danny Mullins, one of 11 jockeys to ride a winner for Mullins this week, and a second leg of a double after he won the Colm Quinn BMW. Group Handicap Chase on Mister Fogpatches for Pat Fahy.

The winning rider said afterwards: “Ruth rides her out at home and she said to me this morning she thought she’d improved. I got that feeling there. Before, we’d won on heavy ground and she’d always been a real slogger but she proved she’s just as good on a bit of nice ground there today. She jumped from hurdle to hurdle.

“I love this little mare. She’s a dinger. If Carlsberg did racehorses, they did Stormy Ireland!"

The final Grade 1 of the season went the way of the rapidly improving Jeff Kidder who won the Ballymore Champion Four Year Old Hurdle under Sean Flanagan.

Jeff Kidder was recording a memorable treble for her connections as he followed his wins at Cheltenham and Fairyhouse to land the spoils in this €100,000 contest in fine style, seeing off the late challenge of Zanahiyr back in second.

When Jeff Kidder won at Cheltenham he was an unheralded 80/1 shot and while not quite those odds today, at 22/1 he was relatively unexpected to land Grade 1 honours at this stage.

"He’s a little dinger so he is. We needed that this week. We were having a lonely week to be honest with you. He’s just kept improving and his jumping was superb today. In Fairyhouse, he missed every second hurdle, today he was brilliant."

There was notable English success throughout the week and Harry Fry continued his love affair with the Punchestown Festival as he landed the penultimate race of the season, the Colm Quinn BMW Group Mares Handicap Hurdle with Pure Bliss.

Reflecting on a Punchestown Festival with a difference, Punchestown Racecourse CEO, Conor O'Neill, said: "As the curtain draws to a close on the 2021 Punchestown Festival it has obviously been a very different year, it is often said around here that it is the people that make Punchestown and as we see the stands, bars, enclosures and restaurants empty throughout the week, it is certainly further testament to that.

"It has made my team here at Punchestown all the more determined to ensure that when we all gather again to celebrate the 2022 Punchestown Festival that it will be a party not to be missed. Thankfully, the one thing that didn't change was the calibre of racing and the action on the track."

O'Neill continued: "There was so many highlights, from Clan Des Obeaux to Honeysucke and the remarkable achievements over the five days of Willie Mullins and it certainly provided a fitting showcase for what has been a fantastic season. Finally, I am so proud of my team in Punchestown whom despite all have ensured that we have staged another memorable Punchestown Festival. In particular I must mention Sean Ryan and his team on the track, overseen by Clerk of the Course, Brendan Sheridan, who have been widely complimented on producing perfect ground throughout the week."