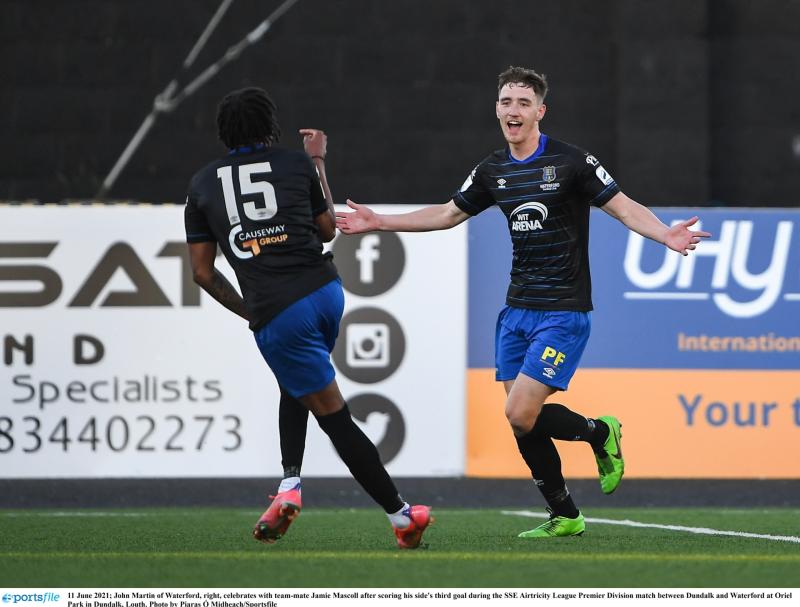 John Martin got his weekend off to the best possible start after his two goals helped Waterford sink Dundalk.

The Paulstown native was on target as the Blues picked up all three points on the road in the SSE Airtricity League Premier Division game at Oriel Park.

Fresh from their takeover by new owner Richard Forrest, Waterford suffered a setback when a Patrick Hoban penalty put Dundalk in front after the half hour, but Martin's first goal saw the sides go in all square at the break.

The evening got even better for Waterford when Shane Griffin put them ahead after the hour, before Martin's second sealed an impressive win on the road for new manager Marc Bircham.

It was a great night for Martin who, with his twin brother Paul, joined the club in 2017. He made his senior debut that year while playing for the club's under-19s. Paul, a goalkeeper, was on the bench for last night's game but has vied with Brian Murphy for the number one spot this season.

It wasn't such a good weekend for Colm Whelan, as his UCD team lost 2-1 at home to Cobh Ramblers. Whelan did get on the scoresheet, but it was a late consolation after two goals in as many minutes from Jake Hegarty gave Ramblers a lead they would not lose.

Elsewhere Killian Cantwell was forced to miss Athlone Town's game in Galway. Cantwell was picked to start, but a late change saw Scott Delaney take his place in the starting side. It was a bad night all round for Athlone, as an injury-time strike from Padraic Cunningham gave Galway United all three points in a 2-1 win.