With the DDF Irish Open returning to Mount Juliet, Trevor Spillane looks back at the Estate’s sporting highlights 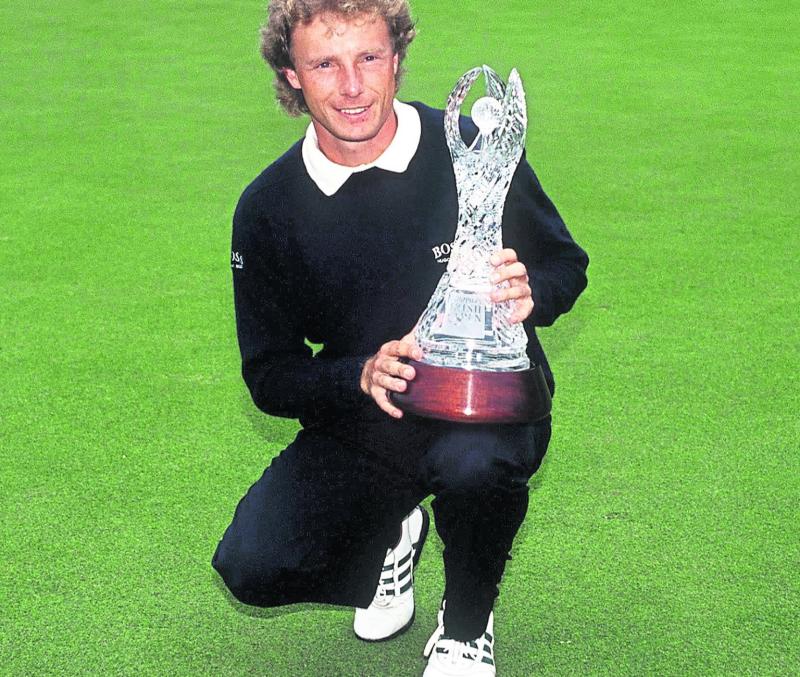 Bernhard Langer of Germany is pictured with the trophy after winning the 1994 Murphy’s Irish Open at Mount Juliet Golf Club in Thomastown, Kilkenny. Pic: Ray McManus/Sportsfile

It may have taken a year longer than expected, but the eyes of the international golfing world will finally focus on Mount Juliet again this July.

The DDF Irish Open will swing into action at the famous Kilkenny course for a fourth time on July 1, with a stellar field leading the chase for the title and a large slice of the €3 million prizefund.

While the rise of the Covid-19 pandemic and subsequent restrictions forced organisers to move the Open from the Kilkenny venue to Galgorm Castle in 2020, having it back at Mount Juliet has proved to be a case of perfect timing for the local course, which celebrates its 30th anniversary this year.

It was an event which, as reported in the Kilkenny People in June 1993, would catch the attention of the globe:

The world will watch as Kilkenny swings next week. It will be our greatest public relations exercise ever.

Kilkenny and the South-East will be beamed into the homes of over 200 million people as the television networks of the globe zoom in on priceless Mount Juliet.

And enjoying the dramatic live show that is the Carrolls Irish Open will be over 100,000 golfing enthusiasts who will jam-pack every hotel and guesthouse in the region.

Kilkenny will be en fete with the centrepiece, the stunningly beautiful and frustratingly challenging Mount Juliet golf course, designed by the great golf master Jack Nicklaus.

Nothing in the Irish golfing calendar enjoys so much popular acclaim. Or commands such respect. Or draws so many internationally renowned competitors. It is the competition of the megastars, the millionaire golfers who burn up the courses of the world.

The picturesque environs of Thomastown proudly presents a top class show which oozes of high standards, bursts with charisma and will extend an open door hospitality for which Ireland and its people are famous.

Ahead of the big tee-off there will be great expectations. The agony and the ecstasy of a swinging power game. And 180 acres of Kilkenny golfing wonderland will take its place among the elite courses in the golfing nations of the world.

The 1993 Carroll’s Irish Open was a huge success for Kilkenny and golf fans alike. In a thrilling finale, Nick Faldo took the spoils when he beat Jose Maria Olazabal after a play-off to take the title for a record-setting third year in a row and pocket the winner’s cheque of £96,630 (€135,282 in today’s money).

Such was the success of 1993’s Open, it was no surprise that Mount Juliet found itself hosting the 1994 event.

Although it boasted a new sponsor in Murphy’s, the Irish Open remained a top class attraction. This time it was Bernhard Langer who made off with the spoils, his final score of -13 seeing him finish a stroke ahead of American John Daly and Australia’s Robert Allenby, earning £98,765.43 (€138,271) in the process.

While 1994’s event had to do battle with the World Cup in the US it was still, nonetheless, a smash. The drive to bring it back to Kilkenny for a third straight year was given the backing of Government officials.

The Murphy’s Brewery sponsored event staged for the second year running at the exquisite Mount Juliet course over the weekend was another outstanding success, reported the Kilkenny People from July 1994:

And now the Jack Nicklaus designed course at Thomastown is the hot tip to stage the Open again in 1995. The people at Mount Juliet have more or less been told the event is theirs, if they want it.

“Don’t think twice, go for it”, was the enthusiastic response from Minister for Sport, Liam Aylward when he learned the international event could be in Kilkenny again next summer.

“Here is a first class opportunity to project ourselves, both Kilkenny and Ireland, to a worldwide audience. It would be a sin if anyone in Kilkenny let such a magnificent opportunity slip by without at least working hard to keep it,” he insisted.

The bid was successful, as the world’s best players returned to Mount Juliet for the 1995 Irish Open.

This time Sam Torrance was the winner, beating Stuart Cage and Howard Clark in a playoff. Cage’s interest ended after the first playoff hole when his second shot on the 18th hit the water.

Torrance and Clark moved on to the second playoff hole, the par five 17th, where Torrance hit what he claimed was the best shot of his life -a three-wood second shot 243 yards on to the green - where a nine-foot putt saw him score an eagle and with it his second Irish Open title.

While Mount Juliet would not host the Open again for another 26 years, it has brought the world’s best golfers back to its greens. In 1997 Mount Juliet hosted Shell’s Wonderful World of Golf, a challenge match between Tom Watson and Fred Couples, while it was also the home for the WGC-American Express Championship in 2002 and 2004.

Tiger Woods grabbed the headlines in 2002 when he beat Retief Goosen by one stroke (Goosen has a share of the course record at Mount Juliet with Sergio Garcia - both carded rounds of 62 within 24 hours of each other at the Championships). In 2004 the title was won by Ernie Els, who beat Thomas Bjørn by one shot.

Will Mount Juliet see a seventh Irish winner of the Open?

Although the competition was first played in 1927 it wasn’t until 1947 when Harry Bradshaw had a two stroke victory over Belgium’s Flory Van Donck at Royal Portrush that an Irish golfer claimed the spoils.

Bradshaw claimed his second title in 1949, this time at Belvoir Park, before Christy O’Connor jnr put his name on the trophy in 1975 - however, the competition was only played once between 1950 and 1975, in 1953. O’Connor beat Harry Bannerman by one stroke at Woodbrook GC.

The 1982 Irish Open was won by John O’Leary, who had a one stroke victory over Maurice Bembridge at Portmarnock, but there was a 25-year gap for the next Irish winner. Padraig Harrington ended the drought when he beat Bradley Dredge in a playoff at Adare.

The most famous Irish winner arrived on the scene two years later, when a then-amateur Shane Lowry saw off Robert Rock in a playoff, sparking great scenes of celebration at Co Louth GC in Baltray in 2009.

The last Irish winner was Rory McIlroy in 2016. In contrast to Bradshaw’s purse of €400 he won in 1949, McIlroy collected €666,660 for finishing three strokes ahead of Bradley Dredge and Russell Knox at the K Club.

With the Rory Foundation hosting the tournament, McIlroy donated his winnings to children’s charities.