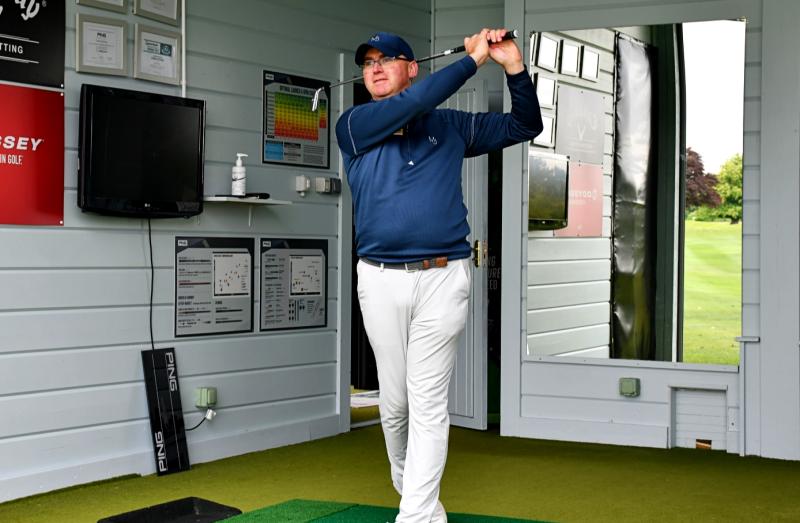 It’s the week everyone in Kilkenny golfing circles has been waiting for as the Dubai Duty Free Irish Open returns to Mount Juliet.

All eyes will be on the iconic Kilkenny venue after the first tee shot this morning as the event takes place on Noreside for the first time since 1993.

It all means it will be an exceptionally busy week for all of the staff at the course, including PGA Golf Professional Sean Cotter.
Cotter is in his role almost 20 years at this stage and he explains the job he does on a daily basis.

“I’ve been the club professional since 2002 so I’ve been here 19 years,” he said. “I’m also involved with the Academy which coaches members, visitors and juniors as well as the ladies.

“I’m also involved as competition secretary which means I look after members’ competitions, organising them with results and stuff so it’s a very busy role. I’m kept going at this time of the year.

Each member of staff will have a different role over the course of the Irish Open Week. For Cotter it will mean taking care of the Academy Driving Range as all 140 players warm up to go into competitive action.

Being so close to some of the best players in Europe will also be an added bonus for the golf professional.

“I’m in charge of the driving range for the week. The players involved in the tournament will hit golf balls for an hour and a half before they tee off - that’s about 140 players in total. My job will be to have the range open, have the golf balls collected and sorted as they are all different makes - Titleist, Taylormade and Callaway are the three main ones - so we have to have them picked, washed and sorted for when the players arrive,” he added. “There will be volunteers involved too so it will be a big team effort.

“From my own point of view I will be in the environment of the players so as a coach I will be on the lookout as to what drills the players are using,” he continued. “Their coaches will be with them so I might even learn a few tips myself.
“As a teaching pro, seeing the calibre of players on the driving range here is like my dream,” he added. “It will be heaven really.”

As Cotter gave his views from the driving range on a beautiful Friday morning in Mount Juliet it was clear to see what the true magnitude of hosting such an event is like. After missing out in 2020, Team Mount Juliet are ready to put on a show.

“We had the Irish Open for three years in 1993, 1994 and 1995 and then the World Championship so to have the Irish Open back now is really exciting,” said Cotter.

“The course is going to look amazing on television with the rolling hills of the countryside showing off the trees, fairways and greens at Mount Juliet.

“Sky Sports and RTE will have a field day with some of the pictures they’ll be able to portray. We are really looking forward to it all getting started.”

“The tournament was originally scheduled to take place over the June Bank Holiday Weekend last year but that didn’t happen. That caused a few issues but we are delighted to have it back this year.”

There’s also the added boost of the return of crowds to the tournament after it was revealed last month that the Dubai Duty Free Irish Open would act as a test event for spectators.

Some 5,000 people will be allowed through the gates on each of the four days but only half of them will be paying customers. The demand to attend the event was there for all to see when tickets sold out in mere minutes.

“We are limited to 5,000 spectators a day, which will be 20,000 for the week, but normally with the demand you could have that 20,000 in one day so it is disappointing that we can’t accommodate everyone,” said Cotter. “However we are thrilled to have our members and some guests in.

“The European Tour and Mount Juliet are working together to be on top of the protocols that are needed and it will be a very safe environment with the golf course being an open area.”

On the playing side of things it’s set to be a sparkling few days of action with all the main Irish stars appearing in Mount Juliet and hopes are high of a home grown winner with the likes of Rory McIlroy, British Open champion Shane Lowry and even Kilkenny’s own Mark Power all set to make their mark.

“With all the travel restrictions over the last few months we weren’t really sure what Irish contingent we would get but the likes of Rory McIlroy, Shane Lowry, Padraig Harrington and Graeme McDowell have all got the go ahead to compete so it’s a very good field.

“All the Irish players wanted to be here - for them it’s like a fifth major. They are looking forward to it.

“The course is in great shape and the fairways are good,” he finished. “While the players will love the greens and they will hole loads of putts so there will be plenty of birdies which will only add to the excitement