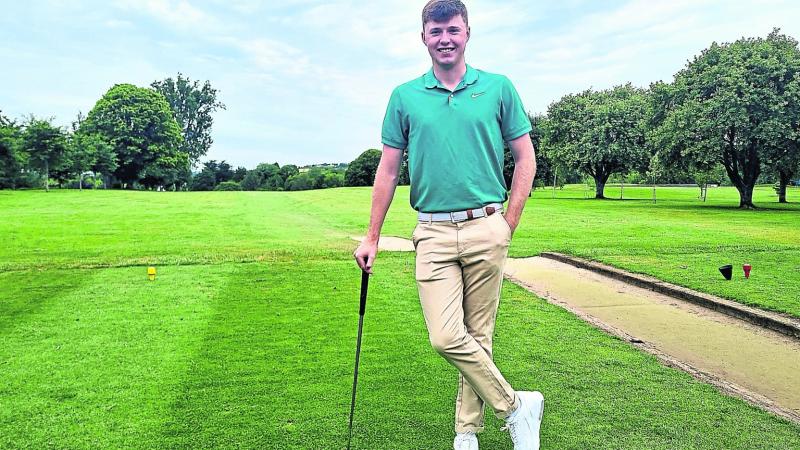 Kilkenny golfer Mark Power is all set to play with professionals at the Dubai Duty Free (DDF) Irish Open this week.

The 21-year-old amateur golfer, who was part of the Great Britain & Ireland Walker Cup team, was invited to join the field by the European Tour for the big event at Mount Juliet Estate - could we see a repeat of Shane Lowry’s amateur win at the Irish Open in Baltray back in 2016?

Whatever happens, Power will be able to call on his family for support when he steps up to the first today - his father Eddie will be his caddy! Having his father by his side is the obvious caddy choice as both Mark’s parents, Eddie and Eileen Rose, were Irish International golfers. The young golfer couldn’t have asked better parentage!

So how nervous is Mark about his DDF Irish Open debut? Not one bit is the answer, this young fellow is rearing to go and as he heads into the ‘bubble’ he can’t wait to push on after his practice round with Shane Lowry.

“It’s going to be a great week,” he said. “To play in Mount Juliet is incredible, it’s only 10 minutes down the road!”

Having the world’s best golfers come to what is essentially a home tournament is a thrill for Power, but going up against some of the game’s big hitters won’t bring too much pressure.

“The only pressure on me is from myself,” he said. “When you get out there, it’s easy to get locked up in the crowd, but I am going to get out there and focus and keep myself relaxed. I’m just going to enjoy it because I have nothing to lose.”

The levelheaded young golfer hopes to make the cut this week and take it from there.

“If I get four rounds in, it’s four days of experience playing with the best guys in the world. I know the course well. You never know, I could do a Shane Lowry on it!”

Power is no stranger with major tournaments and played in the Walker Cup in May. While the GB&I side were beaten by the top amateur’s players in the USA it was a week the Kilkenny man will never forget.

“The Walker Cup is the pinnacle of amateur golf,” he said. “There was huge relief and excitement once I got the chance to play in it. It couldn’t have gone much better, apart from getting the win! To get three out of four points was great personally.”

As one of the top amateurs in Europe, the expectation is that Power will turn professional, but he is in no rush.

“I still have two more years in college in America,” he said. “I love it out there, it’s a really good set up and I’ve definitely progressed. When I’m finished college, I hope to play one more Walker Cup and turn pro. That’s the plan.”

Golf has always been the big draw for Power - he was the first eight year old to become a member of Kilkenny Golf Club!

As his coach Jimmy Bolger said, there was always something special about Mark and his game.

“I knew from the start Mark was always a little bit better than the rest,” said Bolger, the club professional at Kilkenny GC. “If you look to his parents, they are both exceptional golfers. So if you wanted to produce a golfer with the perfect golfer DNA, then Eddie and Eileen are the perfect pair.”

The DDF Irish Open has already kicked off with Power hitting his first tee shot at 2.20pm this afternoon. The all-ticket event is sold out, but RTÉ will have coverage across the four days.