Past disappointments a real driving force for Padraig Walsh 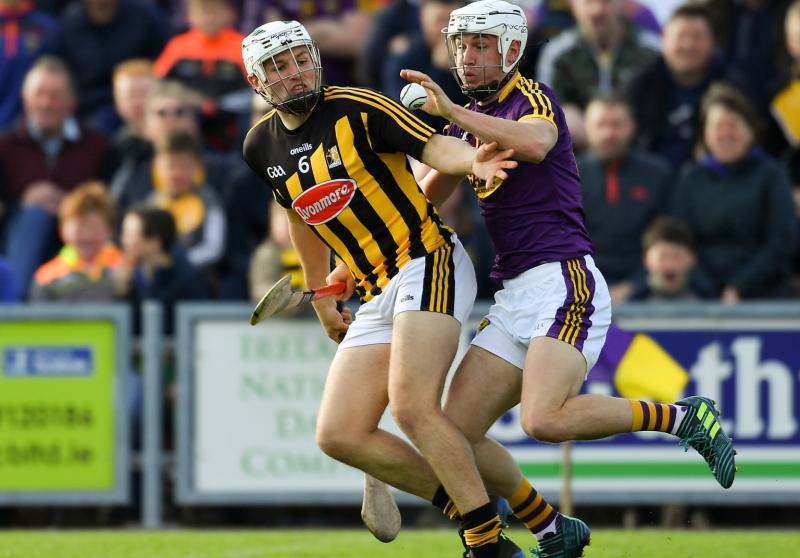 Padraig Walsh in action against Wexford during the 2019 championship

As is normally the case all eyes will be on Kilkenny when they take to the field for their Leinster semi-final meeting with Wexford in Croke Park on Saturday evening.

The Cats will begin their campaign as the defending Leinster champions and, after undertaking a promising league campaign for the most part, hopes remain high of a productive summer on Noreside.

One player that will be key to Kilkenny’s exploits on the pitch will be Padraig Walsh. Whether it’s at centre back or elsewhere the Tullaroan man is just delighted to have a championship to play in after an unsettling couple of months.

“It’s been great to be back hurling the last few months and even from a social side of things it’s nice to be meeting people again so hopefully more people can come to the games as the summer develops,” Walsh said at the launch of the Littlewoods senior hurling championship.

“Playing matches is all you want to do as a player and during the league it was great to get the games week on week and we love that as players.

“Even the way the championship is it’s nearly a game every two weeks this year so it’s something we are really looking forward to and we can’t wait to get started.”

Kilkenny last achieved All-Ireland success in 2015 and while it’s not something that plays on the players’ minds it’s something they’d love to change over the next few months.

“Every year we go out, we want to get as far as we can – your aim is to win an All-Ireland but it’s obviously very competitive at the moment,” the Tullaroan man said.

“There’s positive things to take from the last few years as well – we’ve got to a few All-Irelands, we’ve got to semi-finals and stuff. It’s just trying to improve our game and trying to drive it on, and get to that further step.

“Look, it’s been difficult alright but that’s the challenge that’s there for us,” he added. “The team before us were a very special team with all the All-Irelands they won, but teams like that don’t come around too often. We just have to do our very best to try to win an All-Ireland.

“The longer it goes on, the harder it would be alright but we just look forward to the challenge every year.”

Brian Cody never looks past the task at hand though and after failing to beat Wexford in a number of recent championship clashes Kilkenny eyes will be firmly fixed on the upcoming Leinster semi-final.

There was, however, a bit of a change on both the playing and management sides for Kilkenny over the winter. One of the big alterations was DJ Carey leaving as selector with former player Conor Phelan replacing him.

Walsh has admitted that Phelan has played a very prominent role in their fortunes thus far.

“Conor has been brilliant with us,” he said. “He takes a lot of the drills during training and he keeps everything nice and fresh.
“He brings a new style to training and changes up everything every week. As well as being very vocal he’s easy to talk to so everyone is very fond of him,” he added. “We are delighted to have him with us.”

On the playing side there has also been change with the retirement of Paul Murphy and Ger Aylward while Colin Fennelly is unavailable in 2021 but that has given a couple of new players a chance to stake their claim on the side.

Darragh Corcoran and James Bergin are two of those players to seize the chance as they played a part in all five of Kilkenny’s league games.

“The two lads have settled in really well and they have done a great job, they are young but they are flying at the moment,” Walsh added.

“It’s great to see fresh lads coming in and looking comfortable. They are big strong lads who are well able to hold their own and you’d be delighted with what they have done so far. It’s not just them two either that are pushing hard for a place on the team and that can only be a good thing.”

Kilkenny finished last year’s championship with a 2-27 to 2-23 loss in the All-Ireland semi-final against Waterford but, after leading at half-time, the way the Cats faded out of the contest was noticeable.

Something similar also happened in the Leinster semi-final when they almost threw away a huge lead against Dublin so you can be sure that it’s something Kilkenny have spoken about over the last few months.

“Our aim has been to improve on the areas where we let ourselves down last year,” said Walsh. “Hopefully we can use that in the championship, but as you saw from the league there are so many teams competing at the top with sides taking points off each other so it’s going to be very competitive. We will have to be at our very best if we want to beat any of the teams out there really.

“Hopefully we’ve learned a few things from last year though and it wasn’t too long ago so it’s still fresh in the memory,” he finished. “We’ll do our best to drive it on for the summer ahead.”