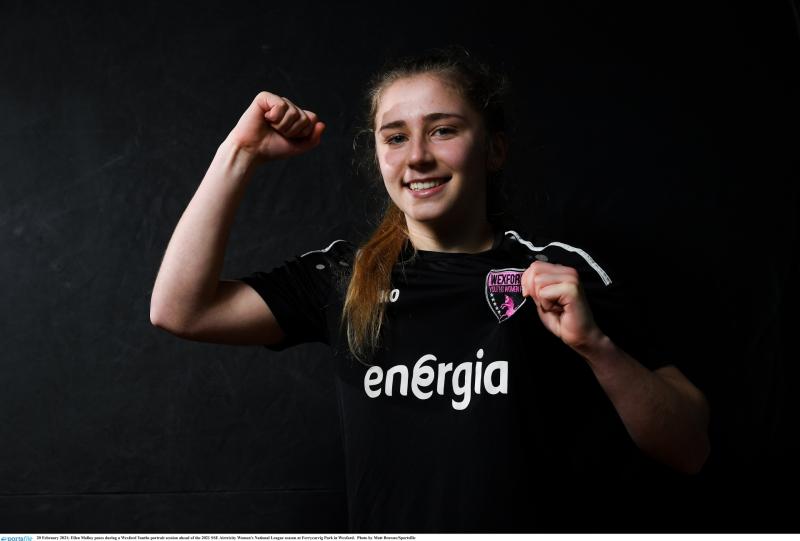 Ellen Molloy struck twice for Wexford Youths at the weekend - her haul included a stunning free-kick!

Ellen Molloy is always a joy to watch when in full flow but some of her performances are utterly jaw-dropping and this was one of those.

The Kilkenny native scored twice as the Youths beat Athlone 3-1 and generally dictated the tempo of this encounter, but it was the quality of her second goal - a free-kick that she earned that should go viral.

Wexford remain unbeaten since Stephen Quinn stepped in to replace Tom Elmes but they made hard work of this win after Katelyn Keogh pulled one back for Athlone.

Molloy had put the visitors in front and it required a sprinkling of her magic plus a goal from Ciara Rossiter to see off a battling Athlone side.

The clock was ticking into its 88th minute when Ciara Maher produced a fine finish that lobbed Cork goalkeeper Abby McCarthy to gift the three points to the hosts.

Up to that point it wasn't clear if either team could emerge victorious. DLR registered 15 shots on goal, Cork unloaded 12. DLR had 44 per cent possession, Cork had 56 per cent. So this was a close game.

McCarthy, who was recalled to the starting line-up, pulled off several excellent saves while she had the crossbar to thank for keeping out Jess Gleeson's shot.

Cork will feel that they deserved at least a point from this game but they could not find a breakthrough with Sarah McKevitt and Sophie Liston wreaking havoc for them.

After losing to rivals Shelbourne last week, Peamount were determined not to slip up for a second week running and that was bad news for Bohemians, who did push them hard.

The champions went into this one without defender Della Doherty, who completed a surprise switch to Wexford Youths, but she wasn't needed as Peamount took control early on.

Captain Áine O'Gorman headed them in front before the interval and then wrapped things up with a left-footed finish late on - bringing her personal tally to eight goals for the season.

Bohs huffed and puffed but rarely had their opponents panicking in spite of some spirited performances. The Gypsies are simply missing a clinical edge that will ultimately reward their good play.

There is a resilient streak being developed by this Treaty United squad and they showcased it in Jackman Park for this Sunday afternoon clash.

Late goals from Gillian Keenan and Jenna Slattery ensured that they shared the spoils with Galway but it was their overall effort, from the first whistle to the last, that really made the difference.

The away team struck first through Lynsey McKey and they looked to be in control when Meabh de Burca converted a second-half penalty. But Treaty were not about to give up.

Galway had Republic of Ireland Women's international Julie-Ann Russell in their line-up and they looked good in patches, but their rhythm will come in time under new boss Stephen Lally.