From injury to the Olympics - Cliodhna Manning's incredible comeback

Kilkenny athlete talks about the 'unbelievable dream' of going to Tokyo 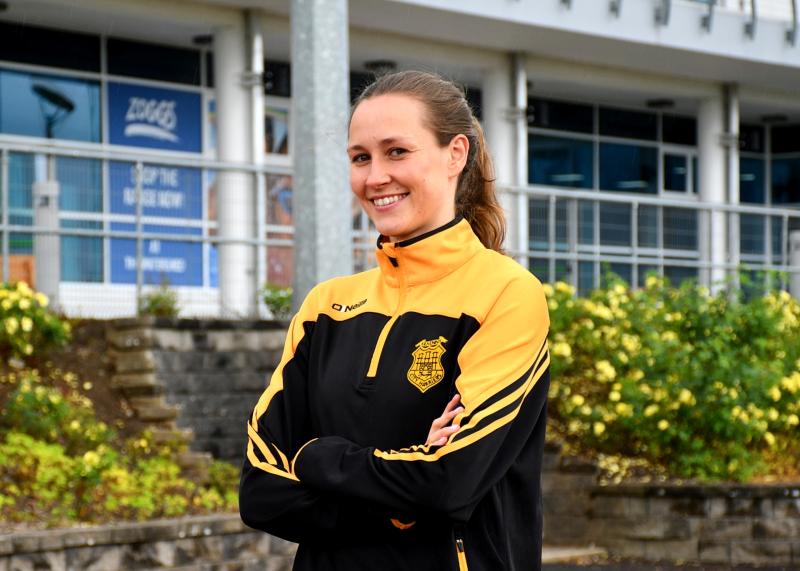 From injury to the international stage - Cliodhna Manning is going to the Olympics!
The Kilkenny City Harriers athlete will be packing her bags and heading to Tokyo after being selected to represent Ireland on the global stage.
“The last week has been a rollercoaster of emotions, but I can’t wait to get going,” she said. “I can’t believe I’m packing my bags and heading to Tokyo.”
Manning was chosen by Athletics Ireland as a member of their mixed 4x400m relay team. One of six athletes named in the 4x400m squad she will team up with Cillin Greene (Galway City Harriers), Chris O’Donnell (North Sligo), Phil Healy (Bandon) and Robert McDonnell (Galway City Harriers). She will also have a familiar colleague alongside her - former St Joseph’s AC runner Sophie Becker, who now races with Raheny Shamrock.
Making the World Games is the final leg of what has been an incredible journey over the past year for Manning. Forget the Olympics - a year ago, just being able to run was enough of a challenge.
“I’ve had quite a few injuries the past while,” the former national 400m champion said. “Last February, just before the start of the pandemic, I had surgery on my foot. Tokyo wasn’t even on the horizon then - it was a case of getting back training and getting back into running.”
A long-standing foot injury meant it was also two steps forward, three back for Manning. She would get injured and then recover, only to suffer setbacks time and time again.
Stress Fracture
“It’s been hard,” she admitted. “It got to the stage where I didn’t think I’d be able to run any more. I kept getting a stress fracture in my foot. It would heal, then I’d get injured again, so it felt like my body wasn’t able for the training. I ended up going to a specialist in London who said the stress fracture had never healed. He recommended getting a plate and pins put in which, thankfully, seems to have worked.”
When things were at their bleakest, Manning found comfort and support from her family and coach. 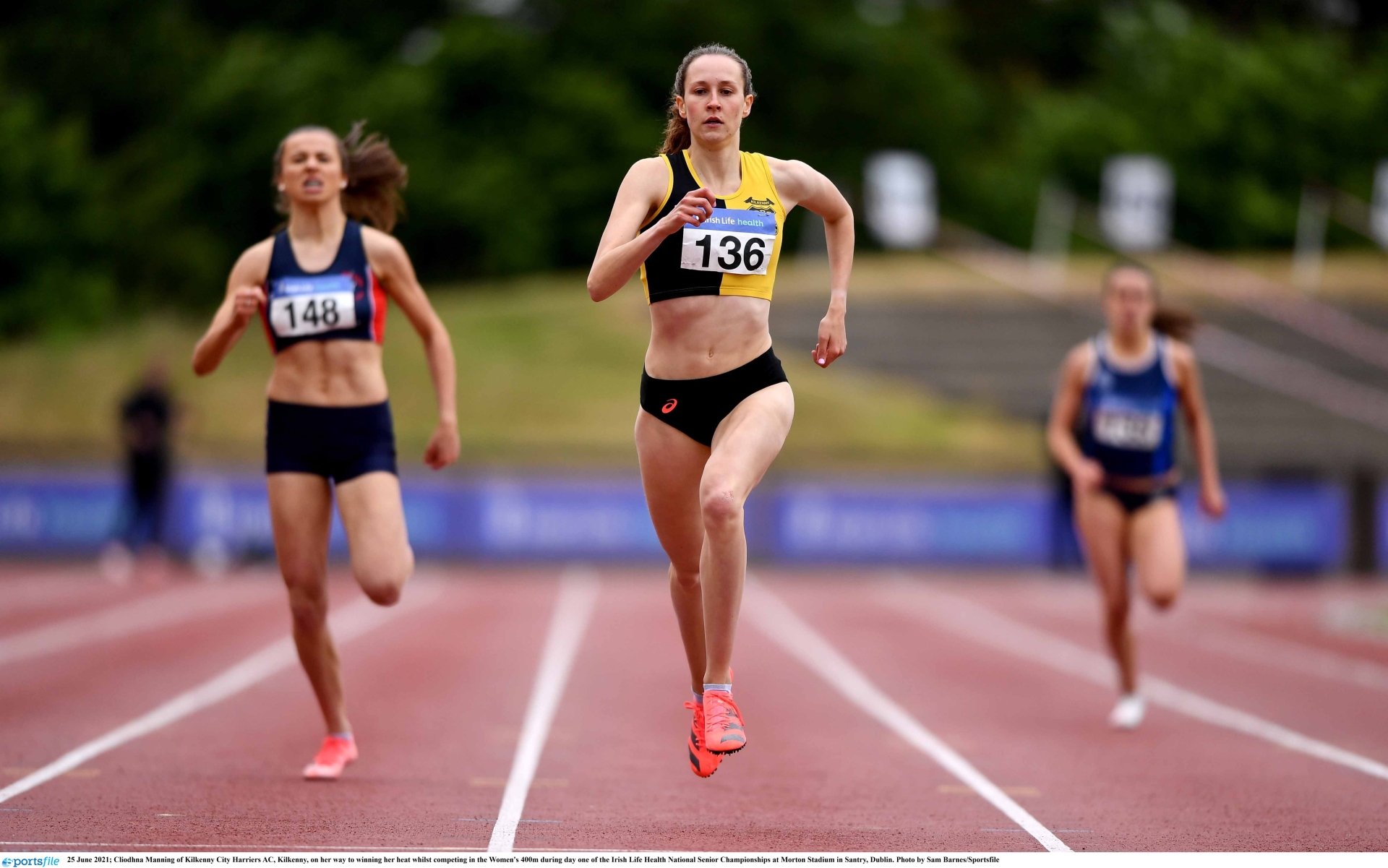 “I’m really lucky with the people I have around me,” she said. “My coach, Peter Lyons, kept me motivated and kept me going, especially in the times when I wasn’t motivated to train, but he kept me turning up.”
Trying to juggle recovery with a global pandemic wasn’t easy, but Manning went back to basics as she fought to regain her form.
“As I’m based in Kilkenny most of my training was in the Castle Park,” she said. “That really helped as running on grass is soft and helped with the injuries.
“I’m also lucky that I was completing a Masters at IT Carlow, so when everything was closed down they let me use their new track. I was always on the relay squad so I had the Elite Athlete classification which allowed me to travel outside the 5k restriction.”
Fast-forward a year and Manning was back in familiar territory.
“I raced in Belfast at the start of May and that was my first race in two years,” she said. “Even to get back on the start line was amazing.
“I was just happy to be back,” she said, looking back on that Irish Milers meet, where she ran a 53:16 (one hundredth off her personal best) to finish third in the 400m event. “To be honest I was a nervous wreck going into that race. I was just delighted to be back on the track. I knew the mixed team had qualified for Tokyo, but at the same time there’s a lot of girls running really fast at the moment - I said that if I could be competitive come the Nationals I would have been happy.”
Competitive she was. Manning stormed to victory in her 400m heat at the Morton Stadium, booking her place in the final.
The national 400m champion in 2017, the Harrier delivered another top class performance, finishing second behind Phil Healy in 53:18 to take silver and put herself in full view of the selection committee.
“Going into the event I just wanted to do the best I could,” she said. “It was my first time running in the Nationals in three years,” she said. “I’d been injured every year since 2017 so even being competitive was amazing.
Olympic Reality
“When I crossed the line in second place I began to think ‘maybe the Olympics could become a reality’,” she said.
After that, it was a case of staying patient and waiting for the call - or in this case refreshing the email inbox.
“As it’s a relay team there was a selection committee meeting, from which Athletics Ireland had to select the team,” she said. “The next day I got an email saying I had been nominated, and asking if I was happy to accept the nomination - which I was, of course!
“After then it was a case of waiting for the Olympic Council to ratify the selection before it was all confirmed.”
And if you thought the run was the end of the race you’d be mistaken.
“The Olympics weren’t on my horizon - I hadn’t thought about them at all,” Manning admitted. “Then the reality of it hit home; in a few weeks I’m going to be in Tokyo - what do I need to get ready!
“I’ll be going for about three and a half weeks, so there’s a lot to do in preparation for the Games, but I can’t wait,” she added. “I still can’t get my head around it - I don’t think it will sink in for a while.”
Manning may be in Japan before that happens, as she is due to jet out tomorrow (Thursday). She will take the best wishes of her family and friends with her, to mention Kilkenny’s entire athletic community and, of course, the Kilkenny City Harriers collective.
In reaching the Olympics, Manning joins a select club of individuals, including Sinead Delahunty, Emily Maher, Eileen O’Keeffe, Joanne Cuddihy, Adrian O’Dwyer, Catriona Cuddihy and Ciara Everard, to have represented the club at the highest athletic level.
“I’m delighted to be carrying on the tradition,” she said. “There are a lot of great athletes who have gone before me, so it’s great to be joining them. KCH is a wonderful club, you can see how people have reached this stage with so many great people working for the club.
“It’s a very inclusive club, but it starts from the top down, from people like May Hutt and Sean Lynch,” she added. “They are incredible, giving everyone the same attention, no matter what level they are at.”
In a happy coincidence, it was exactly a year between the start of Manning’s recuperation from surgery to the day she found out she was going to the Olympics. For the girl who hobbled on to the grass for those first tentative steps to start her recovery, it’s been some journey.
“While I wanted to get back racing, at the start I just wanted to get back running,” she said. “Spending six or seven months not running is a long time when you’re an athlete. And then, once you get back running, you want to run a little faster, a little further, get a bit fitter.
“After that I wanted to race,” she added. “To come back and be selected for the Olympics is unbelievable - it’s a dream.”